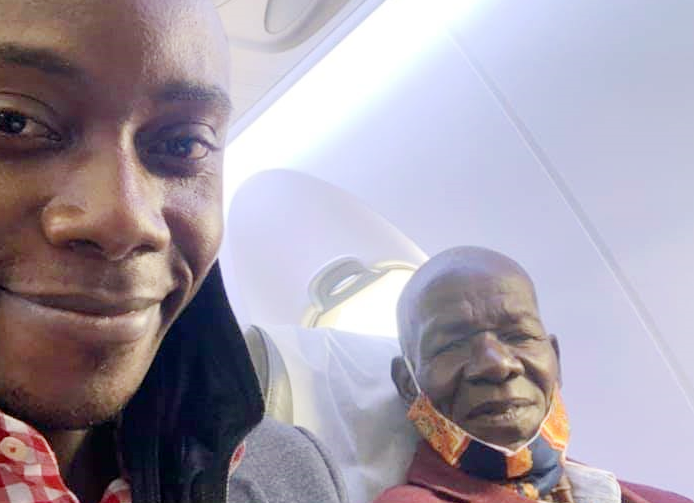 The author with Wilson Dhabangi on the plane

Finally. On September 12, a Uganda Airlines plane flight No UR202 left Entebbe enroute Nairobi, on board, someone special- a 74-year-old man called Wilson Dhabangi. This is why you should know about him.

In 1996, I lost my father. As such, my mother had to work double to sustain us. Sometimes she spent weeks away from home. To be sure that I was getting a good education, she decided to take me to Namalemba Boarding primary school, then a very powerful school along Tirinyi-Mbale road. Unfortunately, many times, she never had the opportunity to come visit me.

In 1997, on our village, there was an old man called Wilson Dhabangi who used to ride a bicycle boda boda. He was about 50 years. He looked frail and beaten by the thorns of village life. But to earn a living, he had clung to riding a bicycle for a living. He was visibly weak but spiritually strong.

He could neither read nor write. Many people used to send him for different errands and pay him because he was trustworthy. His job was riding the bike to ferry passengers for a little fee.  Sometimes he worked for free. He was simply a good man.

One day this man learnt that my mother had been away for too long…and yet I was at school. He decided to come and visit me. We were not related…but he was and is a good man. The first Sunday he visited me became the beginning of many more visits that stretched over three years.

He was old, wore worn-out slippers, had no shoes, and wore the same shirt. All the children at school knew him as my father. Some children would bully me that ‘your father is old and rides a bicycle.’ When someone wanted to pick on me, that was the line. I was that kid from a poor family who is visited by an old man wearing tired slippers, an old torn shirt, and an old bicycle.

This man visited me every Sunday for as long as school was open. That’s roughly over 100 Sundays between 1997 and 1999. I do not remember any Sunday he did not come to visit me. It did not matter whether it rained or not…whether he was sick or well. He would ride his bicycle and come visit me.

Sometimes he carried a half kilo of groundnuts prepared by his wife, other days he simply came to talk to me. One day he brought a tin-filled black tea.

The distance between our home and our school was about three hours by bicycle. It was a rough road with many broken culverts/bridges. When it rained a lot, sometimes the raging running water would overrun the culvert, carry away the stones and soil…and cross. Still, Dhabangi would find a way to cross that water and come visit me. One time water almost took him. He was saved by some boys who were fishing.

Dhabangi did not get a formal education - he got a better education - life education. Every time he came to school, he would always advise me to ‘read hard’ and not ‘eat the seed.’ I remember in 1997, he told me that if I don’t read hard, I would end up like him and suffer.

He told me that if I worked hard and listened to teachers, I would fly in planes and travel to different places. He said if I succeeded, then even people like him who never got an education would perhaps have an opportunity to fly. For whatever reason, he always emphasized the issue of flying.

Fast forward, I completed primary seven in 1999. Unfortunately, he lost his sight. I felt so bad. Fortunately, some good Samaritans (doctors) conducted a medical procedure that restored his sight.

For years, I have always felt a debt in my heart for the love this man gave me. I wanted to give him a surprise. For the last one year, I have been saving money to make this happen.

A few days ago, I managed to get an air ticket for him and another special woman who helped us when our mother was away. Her name is Rebecca. She literally would mother us…and has remained my mother’s best and most loyal friend.

Dhabangi had never even been to the airport before. He told me that the only plane he has ever seen was that of the former president Idi Amin which came to a village near his home in 1974. So, a plane is something that always fascinated him. I knew this would be something that he would love.

So…I have been secretly planning a trip for these two people to thank them. On September 12, every piece fell into place and I managed to get them from the village without them knowing where we are going. I had succeeded in keeping my surprise until I realized there was no way a PCR test was going to be done without them asking. So, I finally broke the news. Dhabangi cried. My heart sunk.

At his age, he had retired…lives a quiet life, and did not have much hope about anything. So, this came as a surprise. At 8am, in what felt like a movie, we lifted off to Nairobi aboard Uganda Airlines.

Three days before, I had written to the airline about my story with Dhabangi. A very good lady called Doreen Nambatya had replied and said she appreciates that we chose to travel with Uganda Airlines and she would ensure it’s a ‘memorable trip’ for us.

So…after all the passengers were seated and we are ready for takeoff, someone makes a special announcement. Uganda Airlines said they want to celebrate Dhabangi and Rebecca for the good they have done. They tell us that Dhabangi, Rebecca, and I have been upgraded to business class and we should therefore shift and join the business class. I could not hide my excitement. I was so humbled. I helped my man Dhabangi get up, and led him to the business class where we comfortably sat.

The pilot came over…thanked them…and said he had been inspired by their story. We set off for Nairobi. After we hit the skies, the pilot again narrated my story with Dhabangi and Rebecca…and dedicated the flight to them. I can’t explain to you how overjoyed I was that Uganda Airlines made this a special experience for me, Dhabangi and Rebecca.

Along the way, Dhabangi asked me a thousand questions…amazed at the technology and feeling of being in a plane. He cried at some moment...while also laughing. The reaction of the passengers was also humbling. When we landed at Jomo Kenyatta airport, many passengers were so very kind…they came and thanked the old man and Rebecca. They also commended me for not forgetting this man...I felt so humbled. How could I?

I have been on planes for some time…but I have not felt so happy as I was. I remembered this man picking me from school on a bicycle…and children laughing at me because I was being taken back home by an old man riding a bicycle.

As I looked over the horizon, memories raced of this man…riding his old bicycle…visiting me…every Sunday…for three years. I remembered his old man’s shirt…his torn slippers and a tear slowly dropped down my cheek. More importantly, I saw the value of doing good…because you can never tell what may come back to you.

I looked to this day for years…the day I would put this man and Rebecca (I call her Aunt Becca) in the sky…and fulfil my promise to them which I made when I was young. I told them that one day, we shall fly together in an airplane. I am glad that life has given me the blessing to achieve this dream.

We spent the night in Nairobi. He was around parts of Nairobi, visited the giraffe center, Nairobi animal orphanage, and saw the environs of Nairobi. I would like to thank Uganda Airlines for making that flight special and sharing the story of the man with a big heart. That was service beyond all expectations.

To all the Dhabangis and Rebeccas of this world, thank you for giving us a hand…believing in us…and showing us unconditional love. God bless you.

The imposing large mountain of Elgon (Masaaba) that is very attractive to visit. And with the presence of modern trains from Mombasa, Nairobi to Kampala and the Congo in the east and another route branching off at Tororo to Juba in the North, the Eastern province of Uganda would be a beautiful place to reckon with. What one would hope for is an airport at Tororo township to serve this region.

And Uganda Airlines would have additional African airline markets to serve.
Report to administrator
+2 #4 Darwin Lubega 2021-09-20 01:20
Wow, very touching Story, Thanks for not forgetting the two special People and to The Observer, thanks for reaching out to people
Report to administrator
+1 #5 HERBERT OKELLO 2021-09-25 02:27
With God everything is possible especially touching lives because the pay in return from Almighty is much bigger.

Thanks for fulfilling the promise and Almighty LORD bless you abundantly. You have a heart of Gold.
Report to administrator