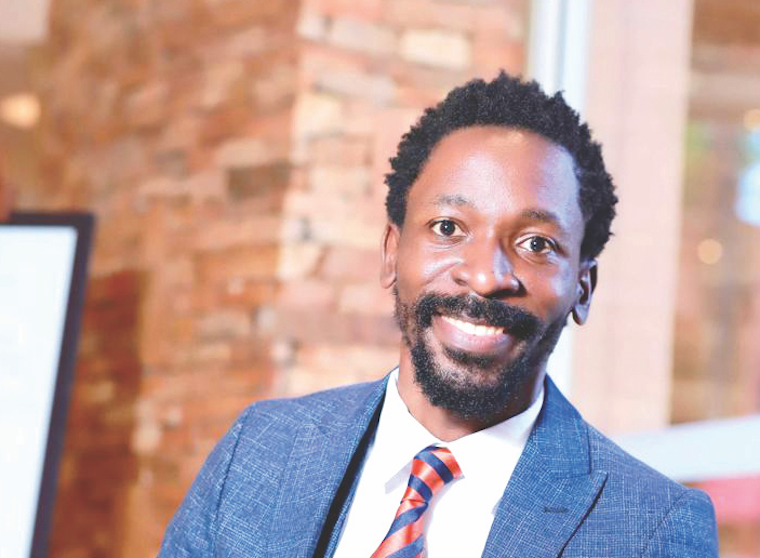 In his more than 10-year legal career, lawyer Isaac Kimaze Ssemakadde does not mince his words. He is a brilliant human rights defender, who describes himself as an anti-clockwise thinker, legal rebel and lately, his hairstyle has got many jaws dropping.

Good afternoon Counsel… Hope all is well in Nigeria.

Wait, am I in Lagos? Calabar? Do you trust your intel? Those people may need to be fired. [Initially, when Quick Talk called for an appointment, the flamboyant lawyer said he was flying to Lagos to attend a wedding...]

That wedding you mentioned, are you a best man or groomsman? This must be a very close person if you flew out for the function!

Correction; I didn’t fly... I used water as a means [of transport]. Have you checked out the water transport situation in Rivers State? Anyway, I am not in Nigeria. I am somewhere, far away from Kampala’s chaos and trauma.

Social media is awash with your current hairstyle. In fact, your looks overshadowed your client’s press briefing.

I have no control over what the hoi polloi perceive me as. I am a man on a mission, a mission to Mars, Jupiter, and the like. I am not going to wait for anybody. I will not seek anyone’s approval. I want to take my clients with me to Mars.

You just interrupted a call I was having with Jeff Bezos [Quick Talk has no idea if Ssemakadde is joking or being serious]; we want to change the world from layman misconceptions and common nomenclature. We are trying to reinvent the law; our way, using humble means as humanely as possible.

Hmmm. So, is this hairstyle inspired by Malawian lawyer Dr Chikosa Silungwe?

I have fashion oozing in my blood; it’s my second love, besides the law, rule of law. Man has to evolve with the times, we shall not let the times pass us by, and I am still a very young man. I am allowed to do a little bit of experiential fashion procedures. It paid off, didn’t it? I mean, it broke the Internet as you say.

Won’t a judge throw you out of court because of the hairstyle? Are you just provoking them?

I can’t rule out anything; anything is possible in this country. I am trying to inspire a few people by doing me. I can’t stop. I don’t want to be boxed in with the common practices. I don’t want to conform.

I am a lawyer. I try to be good at what I do. I represent the voices of the unheard. I am an amplifier of the rule of law and this has been bestowed unto me over a long period of time. I have honed my artistry to fit the current situation in Uganda.

How did you meet Dr Stella Nyanzi to the extent of being her lawyer in the Makerere case? Are you friends?

We share the same spectrum as regards certain antics and human rights regalia; it was only right I represented her. She was a client. I will do it all over again if asked.

You call yourself an anti-clockwise thinker. Why?

Specific occurrences have shaped my thinking in that way; you should try it too [hmmmmm…]. Count your time anti-clockwise sometime, literally. I don’t want to be understood by everybody.

I am not in the business of pleasing people. I am in the business of representing my clientele; my shoulders have developed mass over time from carrying all of them, and it is a long list. One can’t count the time clockwise and be able to do what I do with finesse.

What’s your education and family background?

I have a loving family from Masaka and a long line of merchants; everyone in Kikuubo knows the Ssemakaddes. I went to Law School at Makerere where I graduated top of my class. Next question!
[He studied for his O and A-level at St Mary’s College Kisubi and primary school at Bright Grammar School, Masaka]

Why do you maintain Legal Brains Trust as an NGO, not a law firm?

Legal Brains Trust is not an NGO either; it’s an enigma — even to its founders. Sometimes we call it The Shrine or Ark of the Law; others call it the Last Chance Saloon. Our work revolves around a lot of people. It wouldn’t be fair to lock out a certain calibre of people. It is better to keep it open; how do you reckon?

You are talkative, counsel… Would you understand that other people need to talk too especially on voice calls?

This will depend on who you ask really — the answers my ex and client will give you will be so different.

Hahahaa… You called the DPP Jane Frances Abodo a rotten tomato! You were also arrested. How did it end?

Well, I called her other things too [that she was appointed just because “she has a vagina, and comes from Karamoja”], but I am still here answering your questions, aren’t I? [Sigh!]

If you were appointed Chief Justice, what would you do in your first 100 days?

People think you’re controversial….. What’s the other side of you that we don’t know?

‘Controversial’ is relative. Let’s take that with a grain of salt. Tube bakakkamu [calm down].

Okay. Are you in a relationship?

My ex put me in a bottle; I still think about her, sometimes. No, who am I kidding? All the time. Hope she is happy with all I am trying to do. I miss her a lot. Joanne Uwimbabazi; please come back, counsel misses you.

So, that being said, I can neither confirm nor deny that I am in any sort of relationship right now; it could be a situationship — and yes, there are children. A lot of children actually. I am proudly a Muganda, after all.

Tell me about the most memorable thing about your first date?

She said she was into lawyers, she said she was a sapiosexual [one who finds intelligence sexually attractive or arousing]. I had the widest smile having heard that; to this day, I don’t know if it was me she was talking about.

Your most embarrassing moment…

I will have to take a rain check on this; the memories are still so fresh. I wouldn’t want to open that can right now.

I love Prince Job Paulo Kafeero [RIP], I think he is a gem and timeless. Class is timeless. I love Shawn Mendes’ music too, for reasons best known to me.

What is the craziest thing you have done for love?

What haven’t I done for love? Mbonyebonye [I have suffered]. This is an abstract answer because I lost count of all that I have done. I do a lot when I am in love. She could call me right now and I will stop this interview. That is how bad it gets.

And how do you spend your free time?

I love to have a good laugh and roll in the sand with whoever is introduced to me as my son. I love to make new friends. I read a book or two. Literature runs the world, they say. Words fuel engines, engines run machines, and they shape narratives. So, I love books.

Do you have a crush on any female lawyer?

I have a crush on a lady, she isn’t a lawyer per se, but she is in the arts too, so she is artsy; and that is my type, I love creatives. I know the semantics are vague as of now; so, I wouldn’t want to expound on this.

What are you reading currently?

Life; it’s the greatest manuscript ever written. I read a chapter every day. I am trying to maneuver through it. Pray for me; brother, pray for me.

Aren’t we all reading that book!? So, if you were not a lawyer…

I had to be a lawyer. There was no way around it. I became a lawyer. That is the narrative that matters. I don’t believe in having very many options.

I identify a target and I go for it. I shoot to kill, not to miss. I shoot my shot, and I don’t miss. My target was to disrupt the legal profession and doing it diligently; I didn’t miss. Or did I? [No, you didn’t, Quick Talk thinks as she closes the interview.]

Now in his late 30s, Isaac Ssemakadde was Masaka district’s best candidate in 1996’s Primary Leaving Examination. He went to St Mary’s Kisubi on a Masaka Municipal Council bursary, due to his PLE performance.

He was admitted to Makerere University on government scholarship and was president of the university’s Law Society.

He started out at Bowmans (A.F Mpanga Advocates), one of the most reputable law firms in Uganda, before dedicating his full time to Legal Brains Trust, a project he co-founded while still at Law Development Centre.

+3 #1 Eric L 2021-09-16 23:57
I have immediately liked Ssemakadde. He's my type: went to a strong traditional school, SMACK, has his own arguments to life and things and not in a any worries of impressing people.

I wish i could read more literature from him.
Report to administrator
+3 #2 Apollo 2021-09-17 17:27
Counsel Ssemakadde and another anti-establishment Counsel Mabirizi are taking this Country somewhere intriguing but exciting.

I've strapped up and ready to enjoy the ride. Over to you Sirs.
Report to administrator
-1 #3 Ugandese 2021-09-18 00:43
Holy Crap!! Ssemakade is nothing but a crooked, attention seeking lawyer who masquerades as a fighter for the oppressed.

Ask any classmate of his from Smack or law school and you will realize the man is a fraud. Ask clients or former clients of LBT and you will be disappointed. This man is anything between a narciscistic psychopath/ socipath. He has no love for humanity.

Even his so called ex is a figment of his wild imagination. No love lost for Semaks alias Zimza alias Zagalo!!! Down with Zagzi!!! He is nothing but a vain, manipulative attention seeker!!!
Report to administrator
-1 #4 Ugandese 2021-09-18 01:11
This interview is more of a propaganda pice than anything else.

The interviewer seemed in awe of his interviewee (ssemakade) and made no effort to interrogate him, hence allowing ssemakade to get away with lies, misrepresentations and falsehoods that were then force-fed to readers as the truth.

This is at best misleading. Try to be balanced inspite of your conflict of interest. We demand better from the Observer.
Report to administrator