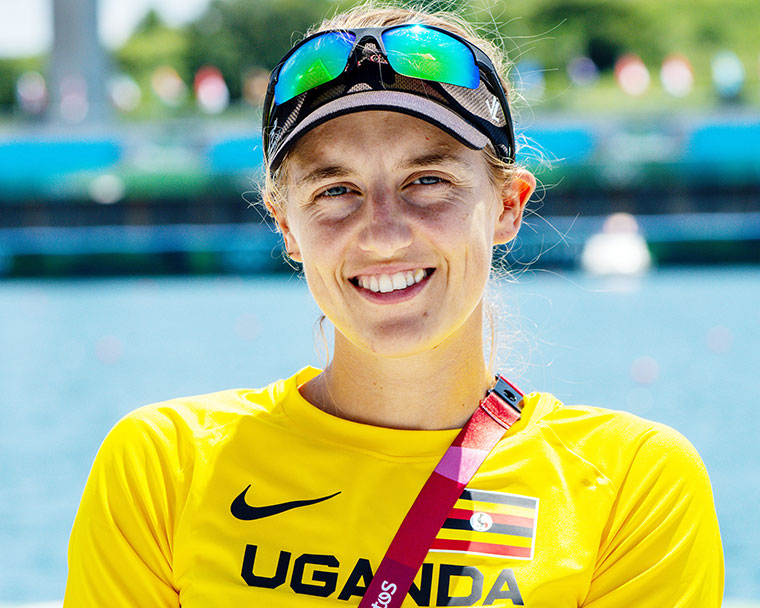 The ongoing Olympic Games in Tokyo are yet to provide Ugandans with the thrill of winning a medal but the participation of rower Kathleen Grace Noble has been heartwarming mostly because she chose to represent the country of her birth.

In a phone candid interview with Nicholas Bamulanzeki, Noble says she is overwhelmed by the support from Uganda and hopes to pay back by leading the promotion of the sport in the years to come.

You were almost unheard of in Uganda before the Olympics but you have become an overnight sensation. Do you realize the euphoria you’ve created?

In truth I don’t know the extent of the impact my Olympic debut has had. I have some sense by the number of friend requests I’ve received and the media that have contacted me, but I have actually been staying away from most social media to try and keep my mind focused on my competition.

It’s wonderful and unexpected that people back home are excited about me representing Uganda in rowing, I hope the enthusiasm can help rowing in Uganda

Can you tell us a little about yourself?

I am just a 26-year-old Ugandan-Irish girl. I was born in Kiwoko hospital, Luweero to Gerry Noble and Moira Noble. I grew up in Uganda, mostly around Kampala-Lubowa, basically around Entebbe road.

I started off as a swimmer and I’ve been swimming through my primary and secondary school. I represented Uganda at the swimming world championship in Istanbul in 2012, which was also my introduction into international competitive sport. For university education, I went to Princeton University in the USA and studied biology. I finished school in 2018.

Are you working professionally?

After I graduated, I worked for a while with a program involved in working with youth. It involved activities like camping, hiking and various out-door activities to help them develop and become self-reliant.

I did that for about nine months. For two years I was working in cancer research, but since April I’ve been training full time.

Why choose to represent Uganda instead of Ireland?

I grew up in Uganda, and I come from the swimming world in Uganda. So, I learnt to swim competitively here and many of my associations that inspire me in the swimming sports are Ugandan.

Swimming in Uganda has given me the opportunity to love the sport. I chose to represent Uganda because that is where I was born and grew up. Also, representing Uganda in sport has given me a deeper level of connection with Uganda and for this I am grateful.

Do you still have family in Uganda?

My parents stay in Uganda, and I often come back home once in a year but just not last year because of the Covid-19 pandemic.

How much of a concern is Covid-19 at the Games?

At the Olympic village, things are very well organized. There’s a lot of precaution being taken; so, I’m not worried about catching Covid-19. The downside, however, is that the environment is not very sociable.

You don’t have the chance to meet, interact and socialize with many people. I feel very supported over social media, even though my family cannot be here. I know they are watching from wherever they are across the world.

They watch my races and call me; so, I feel very strongly supported. Some sports, of course, require physical cheerleaders like boxing. For example, we had the Ugandan boxer Catherine [Nanziri] in the ring and I think that makes it harder to compete in a sport like that with no one to cheer you.

What do your friends and relatives say about representing Uganda?

They are very excited, very proud to see me competing. It’s very exciting to watch and also to see how people in Uganda have become very interested in rowing because of what I’m doing here.

You have become the face of rowing. Do you have any plans to lift the sport’s profile in Uganda?

Yes, and one of the ways I’m doing that is working with influential people in the sport and rowing federation like coach Rodrick [Muhumuza], William Muwanga and Batenga [Nakisozi].

There are some people in Uganda who have been involved in the sport of rowing for quite a while and have been struggling to get momentum and things to work well. However, they are very excited about the entire spotlight on rowing. I’m in communication with them talking about how we can do training camps, developments, get more resources.

So, basically, I am involved in how we can grow the sport in Uganda and I look forward to come back to Uganda and see how all this can be applied.

Do you plan to return with the rest of the team to Uganda after the Olympics?

After her I am going to return to the United States, however, my hope is to come back to Uganda for Christmas. When things become a little more controlled in regards to trying to fight Covid-19 and the restricted movements, then I will return to Uganda for the purpose of growing the sport.

What should the Ugandan fans expect from your participation, will you make it to the finals?

In rowing, everybody goes to a final but the way that works is that there are different finals. There are A finals all the way to F finals.

So, the person that wins the A final is the gold medalist, but I won't be in the A final, I’m in the E final. But for me the goal was to come here, participate, get that experience and have Uganda represented for the first time in rowing.

You’re not going from never having been there to winning a gold medal overnight, that’s not realistic.

What is your general Olympic experience?

So far, my experience with the competition has been good. I think I have done pretty well. I’m racing in the open event; so, a lot of people I’m racing with are bigger and more experienced than I am. I was worried that I would be left behind but at least I’m doing well and looking forward to my last race on Thursday.

A typical day when in the country.

When I’m in Uganda, I spend a lot of time with family, going to church and seeing friends. I enjoy going to Jinja because there are several amusement activities there.

I spent some time training in Uganda in 2016, I spent six months training with coach Muwanga for the under 23 World Championships. By the way, I enjoy rolex as my favorite Ugandan delicacy, but I love and enjoy other traditional Ugandan dishes.

Dear Grace, Kathleen
thank you so much for boosting our olympics effort. We can surely think of getting into many other sports and giving US a bigger name at the games.

You have made Uganda shine already ..... I wish you could see my smile as I was reading the story ....

We must register for more of the un-usual games Banange.....
Report to administrator