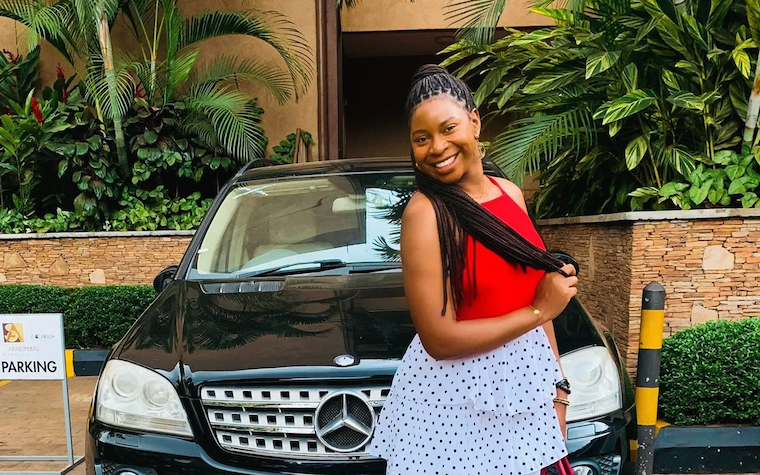 First, you said you are studying at the moment.

Yes, I am studying for a certificate in cosmetology. And there is an entrepreneurship program that I joined. Then I have a 9 to 5 job, and the whenever to whenever...

So, you are the people who don’t love your sleep?

No! I actually enjoy my sleep so much... I don’t even want to hear a drop of water. My curtains are all dark, my house is painted black [Huh!?].

When I was buying the paint, the lady told me, ‘you seem to be a devil worshipper’ [she laughs heartily]. The walls are black and grey. With yellow accents – just three cushions.

What is it you’re passionate about?

My first passion is beauty. I feel like beauty is peace.

So, you would rock a spa day, wouldn’t you?

Every week! When I’m sad, when I’m happy... spa. They know me by name at most of Ugandan spas. I love the smell of the spa.

No, I’m not. [I’m from] Congo, DRC. My mum is Rwandan, dad is Congolese. But when they came to Uganda in 1990-something, we became Ugandan. This is home, but I still go to Goma every year, because that is where my great-granny and granny are. My granny has a hut... a cave kind of thing, where she steams you with nice herbs... I like it.

Huh, the spa experience... So, when did you get the name Birungi?

I was at a school called Happy Times for one term and then a friend told my mum about Daughters of Charity. My mum has always been a housewife, but she has always had problems with my dad. Each time there were problems, she would find a way to make sure we got education. So, they said it is a Catholic orphanage, but they needed Ugandan kids.

So, mum [sat me down] and told me ‘you are going to this orphanage called Daughters of Charity, but your name is not Nyabuhoro Buchurezi; your name is Birungi.’

Are you an only child?

No, we are supposed to be five, but two died. There is a gap of seven years with my brother and 12 years between me and my sister. We were in different orphanages. Mum would take Ashley to Mbarara and Jesse somewhere in Kasese. We were apart a lot.

Your mum seems to be one of those strong women...

She’s a fixer [laughs]. She told us from day one, ‘you may not eat, but you have to go to school’. I went to Kibuli SS, after coming from Shimoni Demonstration School and Kibuli Demonstration School. I was quite stubborn in S1 and left after two weeks. My mum took me to Kibibi SS.

Why all the Muslim schools?

My dad said Muslim schools would teach us how to be kids. Kibibi was the best school I have ever been to; I was expelled in S4 still. Not expulsion [proper], but more like, ‘do not come back after your senior four.’

There was a strike in S3 and I was the head of the strike on the girls’ side. School had to be closed and most of my friends were expelled. The good thing is I was an A student... I was good for the school. They agreed that I would sit for my S4, but no going back for S5. I tried to go back, but they said no.

You thought they had forgotten?

Oh no; you never forgot, JC!

It came from my name and a boy’s name – Cisse – from Senegal. That boy broke my heart and I made sure he didn’t come back in S4. He was just available for everyone. I was so foolish; I used to do his exams. You know doing a whole paper and you pass it to him and then you do yours? So, I made sure I did not do that for him in S3, so he would get expelled [for poor performance].

For S5 I went to St Augustine’s College for a month. I couldn’t handle rules like not allowing kids to have phones...

I got my first phone after university!

I didn’t understand going to a school and not have a phone to call my mum. How!

I told mum I wanted to go back to Kibibi SS. She told me to figure it out. I went back to Kibibi and they allowed me to go back in second term, S5. All my friends went back... the Nana Crew, because in our heads we would sleep in Nana hostel once at campus.

I did. I sold airtime at school, I did mobile money, I signed pass-outs for kids [bursts into laughter]. Each pass out had a price; matron – 5,000, Deputy HM – 10k, HM – 20k... I have a huge photographic memory. I used to cram people’s signatures. There is no day my father refused to give me money that I saw his chequebook and failed to get money from the bank. Even when he divorced my mum, I constructed a house for her with my father’s money.

And he didn’t know this?

No. He got to know later.

So, did Nana hostel happen?

No. I went to Makerere University, but didn’t have the money for Nana. I studied journalism and mass communication. I graduated in 2016. I had started doing TV immediately after Miss Uganda in 2013. I was there until 2015 when I left WBS TV and after graduating in 2016.

You said you had a bad experience on TV...

The cameramen and producer would bet on the new girl, like who is going to sleep with her first. The way this producer would touch you... sexual harassment. I would work at night and they would drop people of Entebbe off before me, yet I stayed in Kisaasi. He just wanted to stay in the car alone with me. I just woke up one day and didn’t go to work. I didn’t even say goodbye.

When I was majoring, I chose public relations. Luckily when I graduated, I did an interview the next day and got the job that very day [as a communications officer in an oil company, an experience she hails as good; “I stepped on my first private jet. I was in 30 African countries in eight months.”]

So many young women are dealing with that. I really hated working in TV. Even when I was doing Show Time. With K-Files, Mr Owaraga protected me so much. But later... it was just a bad experience. I one time rejected a minister’s money and he said, ‘Who do you think you are!’ I was done with that.

[She then went into modelling, ushering, etc, to make ends meet. She also contested for Miss Uganda with Stella Nantumbwe, Fabiola and others and was crowned Miss Personality.]

How do you end up at Swangz?

As I was resigning from the oil company in 2018 [because I was not happy there, despite the money being very good], I got a call from Vince Musisi [of Swangz Avenue].

[She started working at Swangz, doing All Star, Roast n Rhyme... her best year, before her mother was diagnosed with throat cancer that same year].

I went overboard with the alcohol, because I was. depressed. No one saw my sadness until I opened up on SnapChat. 2019 was really hard; my mum was in a coma for eight days in Kenya. She had also been in many microfinance groups where she had loans, and I had to clear those as well. It reached a point where bills were piling up and she wasn’t waking up. I told the doctor, ‘tomorrow if she does not wake up, just switch her off.”

I called the village and told them to prepare. I paid for the casket, everything, and then... she woke up!

I brought her to my home in Muyenga. That was depression number seven. I had to learn how to insert her catheter, clean her, feed her, carry her...I would dash home at lunch time to [tend to mum] then come back to work. I had a smile, but I was dying. At some point I needed to travel for work; so I taught my landlord how to do it. That was the worst depression I’ve ever been through.

How is she now?

She is actually cancer-free. She is at her country home where she wakes up to look at trees and take her chamomile tea. In 2020, I stopped drinking. I used to have alcohol under my bed, under the couch, in the pantry, the fridge... everywhere. I would wake up with insomnia and take seven shots. I would take a shot in the morning even before I could brush.

When did you start the beauty company?

Corona! I used to mix stuff and give my friends; even at campus... My mum taught us how to make body scrubs. Coronavirus hits and we are home doing nothing. I have a lot of herbs and spices. When I’m cooking, I like my house to smell nice. First I mixed different body scrubs... then I met this lady, she does House of Osloff.

I talked to her via Instagram and she started teaching me. I started posting my routines on Snapchat and everybody would ask if they could have some. [When lockdown ended] I went to a nail parlour and a lady next to me said she loved my skin. It was glowing.

I told her these are things I mix... I gave her a lavender scrub and an acne facial oil. She had the worst acne. But after one month, she had skin better than mine. She had a good following on Snapchat and everyone was suddenly asking...

Some doctors feel I have taken their jobs, but I am just helping the world. My mum and grannies gave me knowledge of herbs and I am good. Modern medicine has the herbs I use; so, why should I use a chemical?

Are you in a relationship?

Hmmm. I’m healing. I’m stepping into my femininity. I am understanding that I don’t have to compromise myself. I want one who understands my love language. I have been working on myself for my husband; I do not need a boyfriend anymore.

0 #1 Muliira S 2021-07-27 14:50
You have done so well. Anyone that goes all through that to take care of their mother despite the odds is a true fighter and God often rewards. May h continually bless you
Report to administrator