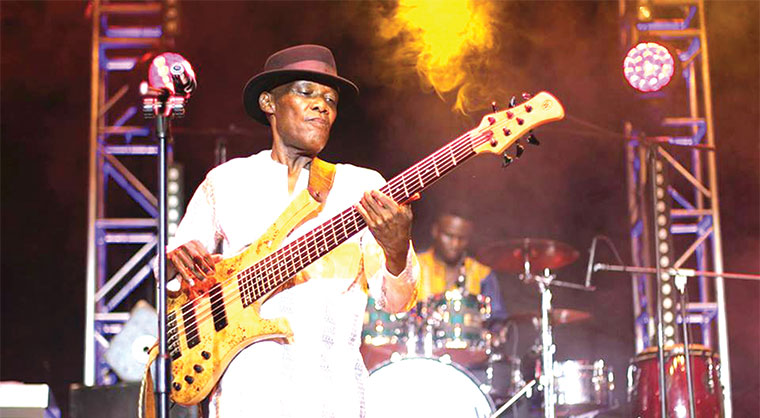 In 2013, legendary bassist Sammy Kasule returned to Uganda to settle after decades abroad. Kasule went ahead to lend his amazing talent to Afrigo band and later Ziwuuna band, before his death last week in Amsterdam, Netherlands.

He was buried in Stockholm, Sweden, a country he called home for more than 30 years. In tribute, we reproduce what he told The Observer in this 2014 interview with Simon Musasizi:

There are so many great bass guitarists, but there is one that has shown mastery and virtuosity beyond understanding. He is someone that will drive young and gifted guitarists like Mike Ouma out of their seats just to see how he does it.

This guy never needs antics on stage; he is calm and composed at all times, letting his fingers do the talking. If you have been to Club Obbligato of late or attended the Guvnor’s legends ball, then you definitely know who I am talking about here. Sammy Kasule.

His hidden intricacies in playing a six-string guitar have earned him enough attention and admiration. It is not every day that you find a bass of more than five strings. It is just an unusual bass, and he has an awesome ability to play it. Many dot.com kids may not know him because it is 40 years since he left Uganda to live abroad.

But the best way to bring you up to speed is to ask you to sing along to: ‘Ozze munnange, ozze gwe njagala ozze’. Does it sound familiar?

At least you have heard this love song played on airwaves or performed by Afrigo band. In fact Jose Chameleone’s hit single, Valu Valu, caused a bit of controversy, with Kasule fans claiming it could have been plagiarized from Ozze.

Kasule is one of the backbones of Uganda’s music, but has for a long time lived a quiet life in Stockholm, Sweden where he has been leading a band called Makonde, with Swedish musicians and another Ugandan, Gerald Naddibanga.

Combining elements of African soukous and Afro-Cuban rhythms, the group had cut its niche in Stockholm for the slick, pop-oriented sound. But towards the end of last year, Kasule made a decision to return home and settle.

Having lived in Sweden for about 30 years, Kasule says he has accomplished what he wanted – to shape the future for his two children: 33-year-old Sammy Kasule Jr who is now married with a seven-year-old child, and 23-year-old Mitchell Kasule.

“They are now [adults]. I have been fighting for their future and I thank God that they are ok. That is why I have decided to move back,” Kasule says. “I don’t intend to form my own band, but I intend to work with musicians in the studio and will be performing with Afrigo band whenever I want to be on stage.”

Kasule has a recording studio in Stockholm, which he plans to relocate to Kampala and has already paid visits to three studios: Dr Tee’s, Eddie Yawe’s and Afrigo band’s to compare notes.

The only challenge he sees ahead is that it is easier to upgrade studios abroad than in Uganda, because the equipment is easily accessible there.

Born to Merekizadeki Kibirige and Catherine Namuwenda in 1952, Kasule started music at a tender age. At the age of 11, he made his first guitar from an empty fuel can, but this did not amuse his mother who destroyed it.

He made a second one and it was still destroyed by his parents. This did not, however, dim his dream. He followed his passion with another guitar, which this time round he decided to hide in the bush on the way to the well. So, every time he was sent to the well, he would pass by the bush to first play his guitar. His inspiration came from listening to Congolese music on radio, and Ugandan musicians Christopher Ssebaduka and Rosia Nyogo from whom he learnt the Ekitoobero song.

This later defined his music style when he took music to a professional level with uplifting rhythms based on soukous mixed with Ugandan folk. Kasule, who went to Kibuli primary school before his family relocated to Masuuliita where he went to Light College Katikamu, abandoned school before finishing O-level to pursue his music career.

In 1969, he joined his first band, Kawumba band, whose home was at New Life bar in Mengo where he played until 1970. Following the political unrest during then President Idi Amin’s government, Kasule sought refuge in neighbouring Kenya, joining a Congolese band called Les Niors in 1973, with which he worked for three years before joining Special Liwanza band.

After learning Kiswahili, he in 1977 recorded his first hit single, Maria Wandaka, which received great airplay in Kenya. He followed it up with a Shauri Yako English version and Ekitoobero. As a gifted composer and performer, he later decided to start his own band Vundumuna together with guitarist Tabu Frantal and keyboardist Botango Bedjil.

This later evolved into Makonde band where he was joined by Philly Bongoley Lutaaya (RIP) in 1979.

When Lutaaya moved to Sweden in 1983, Kasule followed. Here, they teamed up with other Ugandan musicians such as Frank Mbalire, Hope Mukasa, Joseph Nsubuga, Richard Mudungu, Fred Ssemwogerere and Shem Makanga to form a group called Savanna.

That is when they released Lutaaya’s hit-album, Born in Africa. Kasule moved to Japan in 1989, joining the African Jambo Jambo band with four Congolese and another Ugandan, Meddie Matovu. In 1991, he moved back to Sweden and decided to reform Makonde band, and recorded songs including Njabala, Seyeeya and Ziwuuna.

The popularity of the songs earned the band tours in Kampala in 1996 and 1997, holding mega concerts at Nile hotel gardens (now Kampala Serena hotel) and Nakivubo stadium. They also toured Las Vegas and Boston. In 1998, he recorded the classic hit, Ozze, in Germany. It was produced by a Ugandan friend, Vincent Othieno, who introduced him to the six-string bass guitar.

“That time I was playing a five-string bass and then Vincent said, ‘try a six-string’,” he recalls. “When you play a six-string bass, the notes are in the same place. You don’t have to look for them.” Kasule was first introduced to the bass guitar in the early 1970s when the bassist for the band he was playing for quit.

“The band leader just picked me. I didn’t know how to play it, but he had trust in me to learn. And that is how I fell in love with bass. I just love the bass because the bass and drums are the mother of music.”

At the legends ball where he plays with different geniuses in their craft – the likes of Frank Mbalire, Tony Ssenkebejje on the rhythm guitar and Eddie Ganja on the lead guitar – his speed, when he replaces Afrigo band’s Charles Busulwa Ssekamate on the bass, is simply stupefying.

I could be wrong but there is a way it feels like the whole band is following the tempo he is laying. You need to watch him to understand the pure detail and appreciate how he supports and develops each song without distracting others. With all the guitars and vocals going on, he finds spaces to play it so smoothly that you will not find him stepping on the vocals or other guitar parts.

What do you think of Ugandan music today?

Not so many musicians have made an effort to learn instruments. So, when you listen to most songs, they sound is the same. African music is strong on percussions but most of our music today is just computerized.

There are many songs you listen to and realize the singer is off-key and it is like they are in a hurry to release music. Some songs are good but the productions aren’t mature enough.

What is your take on Valu Valu being a version of Ozze?

It is a direct translation of Ozze, but I don’t want to dwell on that, because I have a million songs in my head.

What has taken you so long to release music?

For every musician, there is a time when you choose to relax and upgrade. You don’t have to play, play and play all the time. You have to think and say, I think I have been playing in this style or rhythm for so long and need to change. I have songs I have been working on for the last ten years but haven’t released them.