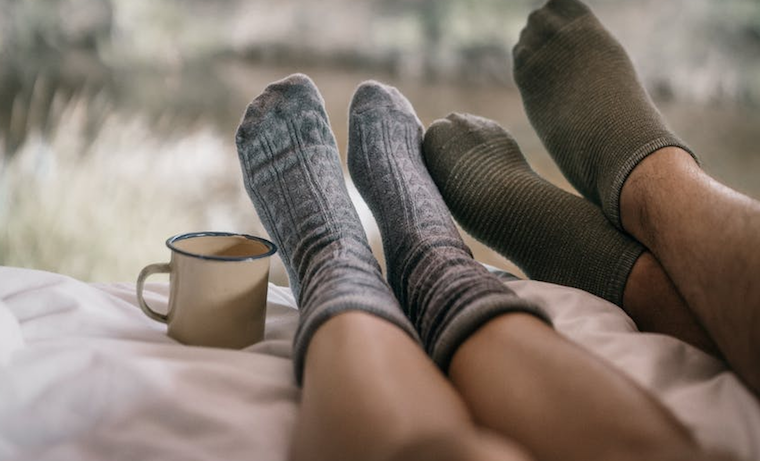 Julie eventually dozed off in my arms, her head nestled against my chest, and it honestly felt good to have her there again.

But after a while, my grumbling stomach reminded me I had not eaten all day; so, as it began to turn dusk outside, I crept out of the bed, careful not to wake Julie, and freshened up in the adjoining bathroom, grateful for the fact that I still had clothes at the flat.

At some point, I knew I would have to go back to the house to get some more work suits if I intended to stay at the flat for a few days (which I did), but that could wait. Showered and changed, I quietly left the bedroom in search of food.

It had been a hot day, and although the sun had begun to set, a humid heat still hung in the air and I found Sandra lounging in the living room in a pair of shorts and light vest, with the fan on full blast.

“You’re up? I thought you guys were out cold,” she remarked in surprise, a knowing naughty glint in her eyes.

“We were, and Julie still is, but I got hungry; so, I came in search of food,” I explained, making a conscious effort not to glance at her long, shapely legs, bare from below the probably too short shorts.

“Thanks,” I agreed readily, eager for her – and her too short shorts – to get out of my immediate view.

David had made love to me slowly and tenderly, careful not to exert even the slightest pressure on my protruding belly.

I knew the one hundred and eighty degree turnabout in his attitude was only because it was a son I was carrying, and that the story would probably be a lot different if it were a girl, but back in his arms again with him looking at me and making love to me like I was the most special woman in the world, I did not care about his sexist, chauvinistic reasons; it felt good to have him back.

At some point I dozed off and when I woke up, I sensed I was alone in bed even before I opened my eyes. For a second I was gripped with a searing panic; had David actually left again?

But then I heard the low murmur of his voice and Sandra’s answering laughter from the living room and breathed a sigh of relief – he had stayed.

Climbing out of bed, I pulled on a gown and followed the sound of their voices to the living room, where I found David finishing off a plate of food.

“Oh good you’re up, I was wondering when you would rise, but I didn’t want to wake you,” he smiled up at me.

“I was tired,” I smiled back shyly. He knew exactly why I was so worn out.

“I was hungry, but Sandra sorted me out; you should eat something as well.”

“That’s a good idea,” I agreed, then turned to Sandra: “Please get me a plate as well.”

I sat down next to David on the couch. While Sandra got up and headed to the kitchen, I leaned in closer to David; this was what nights were meant to be like, the man I loved beside me, with nowhere else he needed to be.

My plan to sneak out of the house before the children woke up flopped when for some odd reason, Samantha picked today of all days to wake up early.

“Good morning, Mummy,” she said at the top of the stairs.

“Good morning, sweetheart; it’s still really early, why don’t you go back to bed and sleep a while longer,” I suggested hopefully. No such luck.

“I’m not tired anymore,” she shook her head. “Where is Daddy?” I groaned inwardly, but tried to act casual and nonchalant as I answered:

“Eh, that’s too much work! I didn’t even hear him when he came home yesterday or when the car went today; I usually hear the car even if I’m sleeping,” she answered with a puzzled frown.

“He left very early, and I’ve got to go now too, let Auntie give you breakfast if you are sure you don’t want to sleep a little bit more.”

“Alright, go get some breakfast, and have a nice day. I love you, darling.”
“I love you too Mummy. Bye.”

“Bye baby,” I answered, and with a peck on her forehead, I hurried down the stairs and out of the house.

As I shut the door behind me, I prayed David would be back when I returned, because I clearly would not be able to keep lying for much longer.