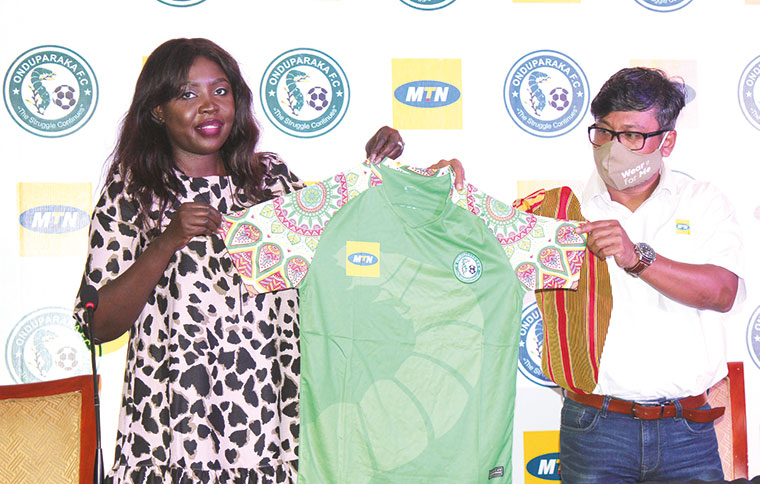 Mercy Munduru, the head of Marketing of Onduparaka FC (L) and Sen Somdev, the chief marketing officer of MTN, display the new jersey with a cultural touch on it

Lingala music is the most popular sound as one reaches the new city of Arua.

Perhaps, this has been influenced by the proximity of this West Nile district to the Democratic Republic of the Congo. Yet, if there is one thing that has bound the people of Arua more, with so much affection and unconfined passion; it is the football club, Onduparaka, which literally means sorghum stem.

Sorghum is a widely popular crop in the area. However, owing to that history of identity, that even influenced the naming of a football club, last week, the Onduparaka administrators, together with their partners MTN, unveiled a new jersey inscribed with artistic items that have historically defined the Lugbara and Madi communities.

The jersey rebrand is meant to grow the team’s popularity. Mercy Munduru, the head of Marketing at Onduparaka, told The Observer that after seeing the effects of Covid-19, they realized the need to be proactive to invigorate their fraternity and also keep the team financially afloat.

“Using art works was something new and novel that we felt would excite many people. So, we had to analyze what our people would easily associate with. And after much brainstorming and consultations, which also involved fine artists, we came to the realization that sorghum and fish were key facets in our heritage,” Munduru said.

As such, they had to be adopted in the works of art that were to be designed and printed on the team’s jersey. But even more fundamentally, the form in which all this would appear was important.

Munduru made comparisons, that in Buganda the gomesi is such a distinct outfit the Baganda have made quite popular to the rest of the country. In the same breath, the people of West Nile, who include the Alur, Kakwa, Madi, Lugbara and Maracha, among others, identify more with the kitenge outfit, again thanks to their proximity to DR Congo.

The green jersey with African print sleeves is going to stand out at matches and its artistic flair will be easy to appreciate. Several things would be showcased from such a piece without compromising on the realism bit.

That is the new Onduparaka kit. The sleeves, according to Munduru, represent brotherhood and nature in West Nile. Watch out for this new-look Onduparaka, the only one outside Buganda’s Masaza football league and possibly Tooro United, to capitalize on a team’s geographical roots for fans and club loyalty.