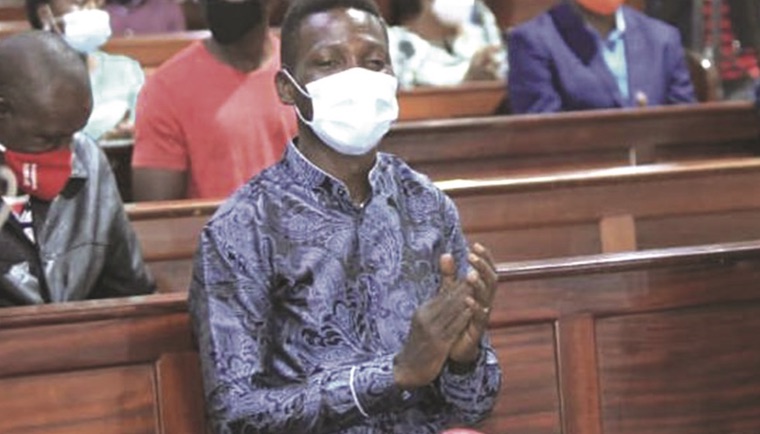 There is an English adage that goes, when life gives you lemons, make lemonade. This fits well into Robert Kyagulanyi Ssentamu’s presidential campaigns that I have been following for weeks now. Kyagulanyi, better known as Bobi Wine – his music stage name – among all the presidential candidates has met more blockades by the police, which has sometimes shot directly at his car, flattening its tyres and at one point missing Mityana Municipality MP Francis Zaake by inches.

But in most of these cases, the musician-turned-politician has found something to put a smile on the faces of those around and of his tormentors.

For instance, as he headed to Bundibugyo on November 24, 2020, several police trucks sandwiched his car, and, for the cops on the trucks, Bobi freestyled a capella to them as they fought to keep straight faces, but this seemed to soften their hearts, so much so that he campaigned in the mountainous district without much disturbance.

He did the same on December 11, 2020 at Ngeta swamp where a combined force of the police and military blocked him for more than 10 hours. The teargas that welcomed him as he entered Mubende in December gave him an idea for a new composition, Tebatukuba Teargas Tuve Wano that he sampled as he concluded his rally in the district.

Despite the message, his ecstatic supporters danced along, cheering. On December 26, when the police flattened his car tyres again at Kifuuta in Kyotera district, his singing partner, Nubian Li, took advantage to stage a mini concert as mechanics replaced the tyres.

For almost one and a half hours, Nubian Li sang as the villagers took turns to take photographs with Kyagulanyi until about 8:30pm when the police fired teargas to disperse the crowd that had gathered for the accidental Boxing day concert. At his rallies, he sometimes spices his speeches with short performances. His music producers move with a collection of instrumentals of his ‘revolutionary’ music that they play back and he sings to.

Songs such as Freedom, Batukasuka Kulalira and Kasukaali Keeko keep bringing Bobi Wine to the fore once in a while, as Kyagulanyi waits in the sidelines.

Right at the onset of his campaigns, Kyagulanyi promised a “rub-a-dub” style of vote hunting – implying that he was to employ both the conventional and non-conventional means.

Seeing images of him washing his face in a swamp in Oyam district or with water from a mineral water bottle by the roadside at Migyera in Nakasongola district, one would think that the self-claimed Ghetto president handles the presidential campaigns the ghetto way.

But he is more organised than he sometimes appears to be. Before the police arrested almost his entire campaign team in Kalangala on December 30, Kyagulanyi had a team of about 40 people comprising mechanics, nurses, music producers, bodyguards and social media handlers.

In addition, he has another team of about three, which is supervised by his wife, Barbara Itungo, that is charged with his wardrobe and meals.

He keeps a fully-equipped ambulance in his convoy, which rushes injured supporters, team members and sometimes security officers to the nearest health facility.

“The party secretariat officially deployed not more than 40 people. Those are the only ones that we cater for; the rest are volunteers who survive on their own but have been on the trail since day one,” Mathais Mpuuga, the NUP deputy president in charge of Buganda, said.

At the end of each day on the campaign trail, Kyagulanyi sits with his teams to assess his performance and media reports about that particular day.

Sitting at the dining table in Mpuuga’s home in Masaka city, different team members took turns to show or play for him clips of the news stories about his campaign.

“Yeah man! Kyakabi (that’s cool),” he said, but wondered why they were not showing him anything about President Museveni’s campaign.

“When I see the enthusiasm in the villages, I feel so challenged and ask myself, ‘what is this I came into?’ And at the same time [I] think of what explanation I can give those many people that have believed in us if I ever betray them. That’s enough to keep me going despite the challenges,” Kyagulanyi said.

Interestingly, the presidential candidate is not keen on football, unlike many of his supporters. When Mpuuga turned on the TV,
the Arsenal - Chelsea game was on, to which Kyagulanyi said: “Who still watches football? I don’t know whether I support Arsenal or Manchester United. Nubian, which team do you support?” Nubian Li responded, “If you paraded all the players, I would fail to identify any, but I know there’s a star called Messi and another one called Ronaldo.”

Mpuuga switched to one of the local channels to catch the 9pm news, after which they settled for a strategic meeting that excluded the bouncers and music promoters.

0 #1 Lakwena 2021-01-12 08:16
BW Kyagulanyi is not only a Dabada dabado Maestro but a political wizard, who has captured the hearts and minds of Ugandans.

In other words, BW heart and soul musical and political magnetism, makes our "Problem of Africa, Author and Master of Violence", Gen Tibuhaburwa aka Juma Lenin green and bitter with envy.