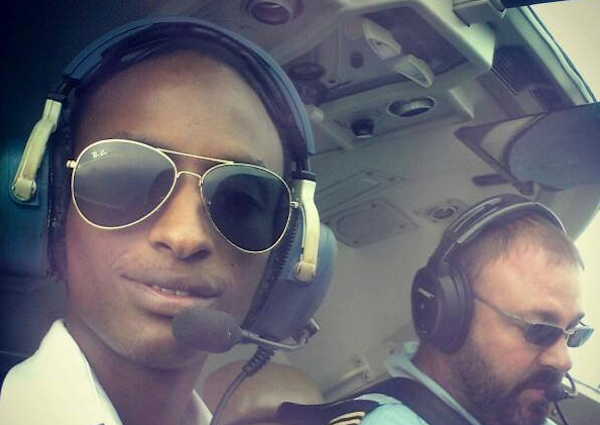 Robert Kateera is a typical go-getter. In a journey that has taken him from Uganda Martyrs primary school, Mbarara, to Kajjansi Flying School, he is currently a professional pilot based in Canada and has already set his sights on flying some of the biggest commercial jets.

Early this year at pastor Samuel Kakande’s Synagogue Church of All Nations in Mulago, Kateera appeared as a special guest. He looked to the audience with a warm smile. He was wearing his pilot uniform consisting of black shoes, trousers and tie; white shirt with gold stripes, which conveyed a delicate sense of sophistication.

The 25-year-old, who is based in Canada as a pilot by profession, shared the secrets for beating several odds to live the life of his dreams.

“Flying is awesome. It is not like driving a car. It was my dream to fly since I was a child and I remember one-day pastor Kakande told me I would be a pilot in spite of the major odds I faced,” he said.

Back then, Kateera had just completed senior six in 2012 and was at a career crossroad. He had been offered to study computer science at Makerere University but he turned down the course and instead opted for Kajjansi Flying School.

“Many of my colleagues couldn’t understand my move but I was confident about my path,” he recalls.

After obtaining a private pilot license (PPL), Kateera soon realised the opportunities in Uganda were limited.

“I got the technical skills but the employment base for pilots locally is very thin,” he said.

He considered joining the UPDF Airforce division but on the advice of his close friend, Nelson Kaumi, a UPDF Air force officer, he opted to specialize in flying commercial aeroplanes.

To foster that dream, Kateera relocated to Canada to pursue further training and started his pilot career at Toronto Airways Canadian Flight Academy.

For his outstanding performance at the academy, where he attained a single engine instrument rating (IR), he was among the nominees at the 2017 Black Business and Professional Association (BBPA) Harry Jerome Awards in 2017, an annual honouring ceremony that celebrates excellence and achievement in the black community.

Nominees are recommended by eminent business and professional colleagues in black communities. So, the feat of nomination also earned him audience with Canadian Prime Minister Justin Trudeau.

“I got recognition for standing out extraordinarily as a young African in my training,” he said.

Thereafter, the recognition paved the way for him to be offered to train with Air Canada after completing his instrument rating and multi-engine rating.

From then on, Kateera never looked back and was later selected to be a representative of the Obama Youth Council, an initiative whose goal is to create opportunities for the youth globally to participate in the open government community and demonstrate how it can be used to solve real problems.

In 2018, Kateera completed the commercial pilot license (CPL), which makes him eligible to fly and make a living as a pilot. However, he still needs to obtain a multi engine instrument rating designed for the largest global aircrafts such as the Boeing 777 and Boeing 737. He already boasts of 260 hours of flying.

“For now, with my CPL, I can fly an airliner. I am now building more time to meet the airline requirements,” he said.

The biggest plane he has flown so far is a Cessna 172.

Kateera returned home to celebrate the feat with his family and friends later in 2018.

“My parents were elated and many friends could not believe I’m living my dream career,” he said.

For scaling the heights so fast, his achievements did not escape President Museveni’s attention, who called him to State House, Entebbe to congratulate him.

“President Museveni was pleased with me and advised me to use this achievement as a motivation for the youth in the country. He also asked me to go and see him after completing my studies,” Kateera said.

Later that year, the New Vision featured Kateera among the Top 40 under 40 in recognition of his service and positive influence.

Kateera’s experience in the skies is meticulous with no room for the slightest error.

“We always have to be two pilots (the captain and the first officer) and we never eat the same food, just in case there is food poisoning we do not lose both. We have got to be sober eight hours from the bottle to the throttle. So, no alcohol at all,” he said.

“We do weight and balance, takeoff and landing calculations, weather briefing and always do a walk around (preflight inspection), check the aircraft documents to be legal to fly and make sure everything is in the safety margin and legal to fly, based on aviation regulations.”

Even after this experience, Kateera remains down to earth.

“I’m confident but I don’t get carried away. I meet many people who say I’m a genius but I worked for it,” said Kateera.

The emotional support that Kateera received from his family has helped him to avoid discouragement and have confidence. The story of his parents’ belief in him in spite of their struggles to raise tuition at Kajjansi encouraged Kateera’s pursuit for education.

“Just seeing them save every penny to keep me in flying school made me focus on excellence,” said Kateera.

Kateera attributes his success to the support from people who have expressed interest his success. With a warm smile, Kateera said, “I thank Pastor Kakande for believing in me and contributing to my facilitation.”

Kateera believes people need to take initiative in their careers instead of following what others are doing.

“Just be extremely committed, set a goal for yourself, try your best to accomplish it,” said Kateera.

The path to a career tests your power of endurance. It is not about wishing to join a profession to get a lot of money or influence, it is mostly about a passion and dedication. There is no feat that is impossible to accomplish if one is surrounded by positive people. Anyone can become a pilot. It’s something I committed to.”

Kateera is hoping to complete his aspirations to become a flight captain within the next one year. He also expressed interest in returning home now that the local aviation industry is showing signs of vibrancy with the revamping of Uganda Airlines.

Kateera’s enthusiasm for flying is incredible. He was determined to fly despite the odds like money, training and medical fitness. I had to advise him to settle for airlines other than military because of the future of revamping the Uganda Airlines. I’m glad he heeded to my advice and chose passenger aero planes.

Kateera is self-driven and passionate about what he does. He would go an extra mile for anything he commits to. To me and those who have crossed his path, he is a dependable and kind friend. I have watched him become and live his dream. The sky is not his limit anymore because that is where he spends most of his time.

If I were you, I would remain in Canada or USA to build your flying hours/experience, even taking up a job as an instructor or a crop sprayer pilot. If you come back to Uganda you will not progress.

With the Covid-19 pandemic, there is very little to write home about as thousands of experienced pilots are being laid off; Good Luck all the same.
Report to administrator
0 #2 WADADA rogers 2020-11-23 16:50
I hope this is not Kakande's stage managed comedy to get more customers to his church
Report to administrator