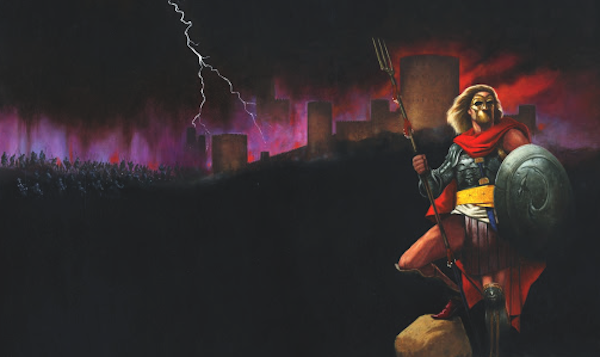 The King Beyond the Gate is the second novel in the Drenai Saga.

Written by David Gemmell, it takes place a century after Legend. Druss and the Earl of Bronze are held in high regard. Their deeds at Dros Delnoch continue to inspire new generations. And yet, the land is in turmoil. The Drenai have spent so many years fighting and repelling the barbaric Nadir.

It never occurred to them that their most troublesome enemy would come from within. Ceska, a power-hungry Drenai emperor, rules with an iron fist. His reign is enforced by beastly armies forged by ancient machines. Standing in Ceska’s way is Tenaka, a cunning soldier of unrivaled skill. Ceska wants to dismiss the threat Tenaka poses.

Half Nadir and Half Drenai, the half breed is hated by both the Nadir and the Drenai. And yet, with each passing day, new foes emerge. Ceska must stop Tenaka before a new war erupts. I don’t know if that synopsis excited you. I don’t care; this novel was a waste of my time.

Authors say that sequels are the hardest to write because they have so many expectations on their shoulders. Readers say the same thing. I never found this to be true. Most sequels to the novels I like have exceeded my expectations. The King Beyond the Gate is the first novel to break that pattern.

Legend was so good. I have not read stories like that in a while; tales filled with rousing speeches, heroic deeds, and larger-than-life characters. It was a reminder that fantasy can be optimistic. Legend should have failed spectacularly, but it succeeded in every way. The novel was epic and intimate, thrilling, and tragic.

On the other hand, The King Beyond the Gate feels disappointingly hollow. First of all, I don’t understand why we had to jump a century. Gemmell spent hundreds of pages building a relatively sizable cast of characters in Legend, only to kill most of them off. But those who survived could have carried the sequel.

By skipping a century, he killed the momentum. Secondly, these new characters are only mildly entertaining. Legend works because you can’t get enough of Druss. The man is a walking lightning bolt. He electrifies every scene. And he is not alone. The men of Dros Delnoch are so pitiful you cannot wait to watch as Druss makes legends out of them all.

And he proceeds to do just that even as Gemmell provides insight into the unique motivations driving each soldier. Sanderson did something similar with Kaladin and Bridge Four. The characters in Gemmell’s second novel make for a decent supporting cast. But as primary protagonists, they are sorely lacking.

Don’t get me wrong. Gemmell plays all the right notes. Tenaka works as a brooding general with a troubled past. Ananais attracts sympathy as the disfigured playboy with a fiercely loyal streak. Decado is...I hate Decado.

Their plight is mostly hopeless. Ceska has the upper hand and the odds are almost always against our heroes. So naturally, you have plenty of tension and numerous opportunities for drama, infighting, and self-doubt.

This story should work but it doesn’t. Every turn of events feels somehow predictable. The stakes are high and yet they just don’t feel that important. I read half of this novel before I ultimately gave up. Am I done with the Drenai saga? No, I’m not. From what I have heard, you don’t have to read Book 2 to enjoy Book 3.