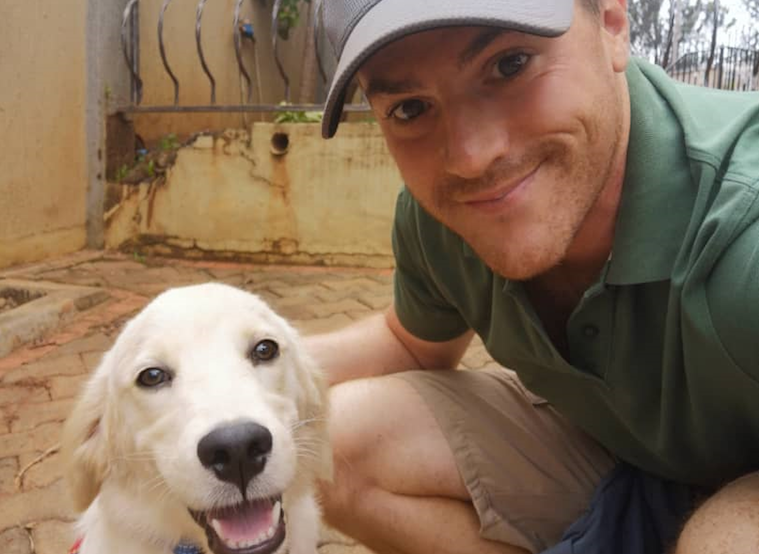 Johnathan McKinstry with his dog

Ten-month-old Winston had the best time of his life during the nationwide total lockdown between March and May.

Unless one was an ‘essential’ worker, everyone was required to stay at home, hence spending more time with spouses and children. In stable families, a lot of parental love and care were expended. Winston partook of the same; receiving more attention, feeding, play time and walks in the neighbourhood, more than he would have enjoyed had the circumstances been normal.

Winston is a dog. A Golden Retriever, to be precise. And he is one of Johnathan McKinstry’s closest friends. In many ways, Winston embodies the unknown side of McKinstry, as a dog lover.

“Of course settling into a new environment far away from family can be tricky. So, having Winston around has been fun,” he said.

McKinstry adopted Winston earlier in the year as a puppy, before the lockdown. Yet, because of his work schedule that includes scouting players in the Uganda Premier League, McKinstry could not give Winston the attention the puppy craved.

However, the lockdown meant it was McKinstry and Winston in the house. And without football to attend to, following the postponement of the African Nations Championships (Chan), which The Cranes were slated to take part in, in Cameroon last April, the McKinstry - Winston love affair blossomed.

“Ordinarily, Winston would have one walk a day. But because of the boredom of being at home all the time, he just got lucky. He would get two or three walks in a day. I must admit, it was fun, making up for being away from the training ground, where I would have preferred to be,” McKinstry said.

Although McKinstry returned to the training ground earlier this month when The Cranes assembled for their trip to the UAE, he has been able to watch Winston grow and nurture him into a fine dog.

McKinstry said: “I think Winston will be the saddest dog when normalcy returns to our lives, because he will not be able to get the same amount of attention as he has over the last seven months.”

Still, the youthful coach cannot wait to see football return to its usual routine. He misses the domestic league. That is how deep-rooted in Uganda McKinstry already is. While growing up in Lisburn, just 13km southwest of Belfast, the capital of Northern Ireland, his mother taught him how to cook and had he not pursued a career in football, he would have been a chef.

Cookbooks are among his favourite reads, and he cooks all his meals from breakfast to dinner. Although McKinstry is yet to learn how to prepare the local Ugandan dishes, instead of going to the restaurant, he heads to a supermarket and buys the required ingredients.

“I make pizzas and hamburgers at home. I prepare Lasagna, Indian and Chinese food,” he said. Yet, to understand what a cooking freak he really is, McKinstry also bakes his bread.
“I find cooking really relaxing.”

Yet, also, by cooking his own food, McKinstry ensures that he eats healthy. He prefers a meal comprising more vegetables and nyama choma (roasted meat).

Christopher McDougall’s Born To Run is one of the best books McKinstry has read. It is an ethnography about the Tarahumara, a reclusive Mexican tribe of super athletes, that are able to run very long distances without getting injured. McKinstry was so inspired by it that a few years ago, he took part in the Paris marathon, running 42 kilometres.

He loves being fit, which is why bicycle rides are part of his repertoire. McKinstry has participated in a few other runs, and he had hoped to be in the local marathons this year had it not been the coronavirus disease pandemic interrupting them. At age 35, Uganda is McKinstry’s third African national team he has coached, after Sierra Leone at 28 and Rwanda at 30. He has also coached teams in Bangladesh, riding on the sheer will to make it big in the sport.

In Uganda, he hit the road running, guiding the Cranes to Cecafa Senior Challenge Cup success last December. He now has his sights on the Chan next year and the Africa Cup of Nations in 2022. But nothing would please McKinstry more than leading Uganda to its first World Cup in Qatar 2022.

With such dreams, one would think he is all football strategy and no play; McKinstry will make time for the cinema instead of staying indoors, and he has gone on safari in Queen Elizabeth national park.

That said, don’t look for him in nightclubs and discotheques; he confesses those nights are long behind him. So, for the Ugandan slay queen hoping to net him in a club one of these days…? Not happening. The hunky McKinstry prefers staying indoors with Winston and a good cookbook.