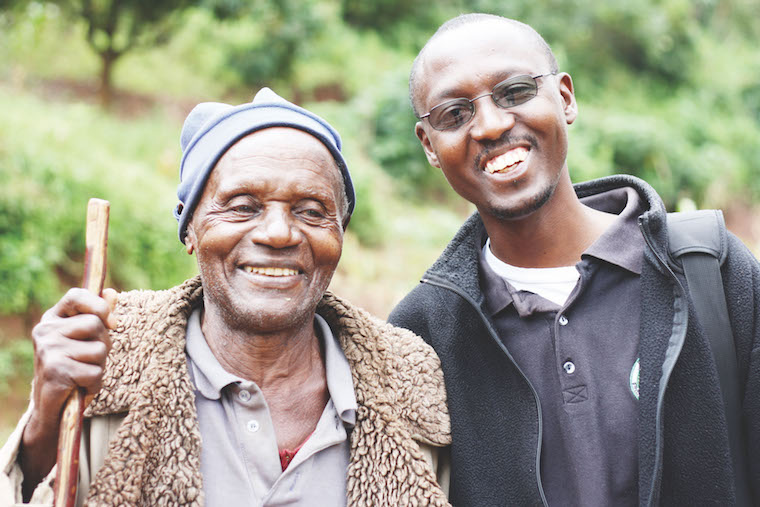 Kenneth Mugayehwenkyi (R) with one of the Rotom beneficiaries

On October 1 when Uganda joined the rest of the world to celebrate the International Day of Older Persons, KENNETH MUGAYEHWENKYI led a team of volunteers to lend a helping hand to old persons in Nama parish, Mukono.

As Nicholas Bamulanzeki found out, Mugayehwenkyi, through his NGO called Reach One Touch One Ministries (ROTOM), has a deeper passion to empower older persons through provision of free healthcare and relief items, and general wellbeing.

I was recommended to Kenneth Mugayehwenkyi by several dog enthusiasts, who singled him out as one of the best dog breeders in the country. However, it was an unexpected turn of events when I reached Namubiru village, Nama sub-county in Mukono to meet him. It is here that I found that there is more about Mugayehwenkyi than dog-breeding because he is touching thousands of elderly people.

Here at the ROTOM health facility, I found Mugayehwenkyi and his team tending to dozens of sick people, some of whom had travelled as many as 70km to come to the facility for treatment.

“We offer free services for old people from the age of 60 but charge a little percentage to other individuals, whose proceeds are injected into the care of the old people,” he says. “Our main commitment is offering an excellent service to seniors but we welcome everyone.”

Mugayehwenkyi also says the ministry looks after several grandchildren of their beneficiaries and gets most of its funding through various donors and well-wishers from different parts of the world. Later, I grudgingly joined Mugayehwenkyi on his journey through the various parishes in Nama, often stopping to check on the health of the elderly while also offering relief items.

That very morning President Museveni addressed the nation to commemorate the International Day of Older Persons. He advised the elderly against alcoholism, smoking and other-related vices that accelerate their demise.

Incidentally, among those we met was Augustine Murambizi, a 75-year-old rehabilitated alcoholic. He told The Observer that he migrated to Uganda in 1957 from Rwanda but along the way lost touch with his family. Over the years, he settled in Mukono and started to menial work at various factories.

“When I lost energy to lift heavy machines, I was retrenched but I had nowhere to go. I resorted to chain smoking and drinking alcohol because I had lost hope in life,” he says.

Mugayehwenkyi, 52, says he first met Murambizi while visiting a friend’s site in 2003. “He was living in a makeshift kiosk that was exposed with no roof. I got touched and offered him to join me at ROTOM and I’m glad we have transformed him,” he says.

Murambizi admitted he quit substance abuse and is now spiritually empowered to live a positive life. “The praying sessions we hold every week have greatly helped me understand my purpose in life and I have passed on this knowledge to other people,” he says. “ROTOM foots all of my bills from feeding to medical.”

This is a routine Mugayehwenkyi has done for the past 17 years since he started ROTOM in 2003 and Murambizi’s story is just one of more than 1,000 older persons taken care of by Mugayehwenkyi’s ministry.

“Today, ROTOM supports 1,560 older persons and 300 children in Uganda,” he said as we traversed through the different files at the centre. “We recently expanded to Ethiopia, where we care for 35 older persons and 25 girls. By the way, this mission has offices in the USA, Canada, Germany and the UK, where we get most of our support.”

The question that kept lingering in my mind is what drives Mugayehwenkyi.

In 2001, after working as a social worker with children in Namirembe diocese and Mission for All (MIFA) for 10 years, Mugayehwenkyi realised it was time to grow to another level.

“I travelled to Canada to pursue further studies with a desire to eventually migrate to North America with my family. After my studies, I got a job in the USA. Life was going as planned. I had hardly spent six months in the USA when my wife, Miriam Senyimba, presented me with a situation of two orphaned girls she had met in Seeta, who were in need of school fees and upkeep,” he recalls.

“The girls’ sole provider was their grandmother Elizabeth Kirokya, who herself was too weak to do any work. My income in the USA enabled us to begin supporting the two girls with school fees and a few other necessities.”

In December 2002, while visiting his family in Uganda with the help of his friend Gwen Kahler, they built a brick house for the girls. During the process, he had the opportunity to hear their grandmother’s story first hand.

“I learned how she had lost her family and all that she had left were the two girls; she had no means of survival, was lonely and helpless,” he says. “This experience touched my heart and changed my desires and plans for the future. I shared this with Kahler and another friend called Jimmie Shoemaker. They affirmed that this was God’s call on my life. They encouraged and supported my return to Uganda to minister to older persons.”

Instead of taking his family to the USA, he chose to come back to Uganda but this did not go down well with some friends and family.

“To some, this looked like a very stupid plan but for me and my family, but to me, especially my wife, all we cared was the assurance that this is God’s will for my life,” he says.

Upon return to Uganda, Mugayehwenkyi quickly gained Kirokya’s trust and she introduced him to her other friends with similar challenges.

“One that quickly comes to mind was Naomi, who was scavenging from the garbage for survival and before I knew it, I was visiting eight older persons and joining them for prayer, sharing and bible reading. We called it the weekly fellowship and the older persons loved this; some would stay sometimes from 9am till 3pm. This time span made it necessary to provide a meal for them,” he says.

One day, Clementine, one of the older friends he was visiting, did not show up for the fellowship and upon discovering she had malaria, Mugayehwenkyi added the healthcare aspect of his new ministry.

CARING FOR THE AGED

Soon after starting ROTOM, Mugayehwenkyi realized the needs of the elderly were many, including societal neglect as well as minimal government support to their needs. He says he embarked on awareness campaigns with the first major activity being a national symposium on HIV/Aids and older persons in 2006.

“It was an eye-opener about HIV/Aids in older persons because the public didn’t expect them to be endangered by the scourge,” he says.
Since then, Mugayehwenkyi has travelled the world advocating for the plight of older persons to this day.

Mugayehwenkyi says everyone can be a part of the effort to help older persons live a dignified life.

“The needs and challenges of older persons across sub-Saharan Africa are the same. Most can no longer lean on their families for support and governments do not provide any formal support. I have learned that a simple outreach program that supports what is left of the family and community to meet older persons’ emotional, physical and financial needs goes a long way,” he says.

“My desire is to identify leaders in other African countries that can learn from our experience and go back to their communities to create programs that can serve their vulnerable older persons.”

The 52-year-old says the peasant upbringing spiritual fulfilment shaped him to be the person he is.

“I am the fifth of eight children. We lived in a home that was approximately 20 feet by 20 feet. We had scanty clothes and no shoes but we always had enough to eat from our fields and from the animals we kept,” he says.

“I grew up during the time of Idi Amin’s regime and several times the army came to our home and beat up my father demanding for money which he refused to give them. Twice, guys from State Research Bureau took him away in the car boot drunk but luckily he returned.”

Nonetheless, he says this traumatized him and made him turn to God. This foundation drove Mugayehwenkyi towards missionary work and in 1994 while working with Namirembe diocese, he met with Miriam [daughter of retired Bishop Michael Senyimba], who was doing her internship at a sister organization. The two got married in 1996 and have five children.

“Her love and generosity has been the bedrock of our ministry. When I returned, I did not have a salary for almost 10 years but Miriam provided for most of our family’s needs,” he says.