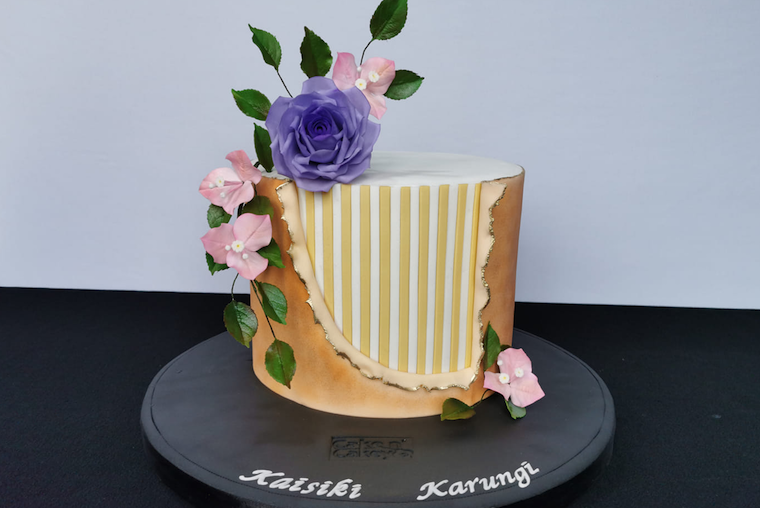 If everybody is comfortable with your prices, there is a high possibility that you're charging lower than you should, says Cake n’ Cakey CEO Pius Kyomukama. To him, one extremely happy client appreciative of the value added is worth a hundred more just interested in a lower price but not quality.

He is booked for all of September, October, November (except between 10 and 17th) and all of December. Kyomukama’s cakes are essentially functional pieces of art, communicating imaginative, but genuine expressions from loved ones. Little wonder that some clients have watched their cakes go bad (twice) without even tasting a piece, because the artistry was too good to cut into. And to him and his team of three, customer is not king; the product is.

Even with his ‘never repeat a cake design’ golden rule, the environmental science and construction management graduate is a perfectionist who has perfected his baking trade with trainings in Brazil and South Africa. He is not about to run out of ideas.

There is no repeat of the same person in another, he says, why repeat cake designs? He is happy that he addressed a gap that was missing in the baking industry and prides himself as being the boss of cake artistry in the country.

Last year, he won Best Cake Artist at the Kenya Baking Industry Awards and was a nominated finalist for East Africa Baker of the Year, Wedding Cake Baker of the Year awards, which were cut short by coronavirus.

“If I baked a cake for you and you’re not able to pick it, I can’t give it to anybody else, because it can’t communicate to them. Each piece communicates to the recipient; it will speak to you. I try to sit down and infuse the whole storytelling like old times when you want to give gifts; like, you want to give a card and then write 100 words in it and express how much you love someone. I feel you may not have that much time to tell someone how much you love them, how they have been good to you,” he says.

From his own office set up in Namugongo near the Uganda Martyrs Shrine, you can tell a man who loves being simple, unique and different but values quality over quantity.

No wonder he is unapologetically pricy, for he is so confident about what he does to the point that happy Ugandan clients in the USA have had to order for cake from Uganda. Unlike other bakers, he must manage and cut his own cakes.

“I have a lot of attachment to the cakes, but then I also want to serve it right, I want to make sure everybody gets it…Cake is the only thing at that party; if misused, it affects everybody who attended that party…It is very important to safeguard it because a lot of things can go wrong,” Kyomukama says.

“I have a problem if I give you cake and I see you cutting it recklessly; it is just in my nature – I expect you to go row by row, be orderly. Even cut cake cubes, I just want to see them as cubes, they should have some formation, you don’t just pluck it off and then it looks like a rock.”

Kyomukama who quit his well-paying corporate telecommunication jobs in 2016 to concentrate on his baking despite winning employer of the month several times, is now on a self-assigned mission to change the perception of vocations like baking in the country.

He says when he quit formal employment, some of his friends thought he was going through depression.

His baking school located on the same storeyed building in Namugongo that houses the Cake n’ Cakey bakery and his home, teaches a module per week and also includes seven months of mentorship. During the mentorship, a student must present one project per month. For those who find his tuition too high, they have simply not got their priorities right, he says.

A multi-coloured flower in a glass vase stands out in his less accessorized office. This flower, though, is edible. He says with the right temperature conditions of 34 degrees Celsius and above, it can last up to six months and now wants to replace the synthetic flowers given by in-laws at Ganda introduction ceremonies with these edible flowers.

For wedding parties that can afford the expense, these edible flowers can also make great centerpieces that provide a pleasant and delicious surprise for guests. Except for the board, every accessory on the Cakey’s cake is edible.

With the natural gift to aptly read personalities, it is little wonder that Kyomukama says not once since 2016 when he went commercial has he failed to get his cake right. Oftentimes, clients call to ask how he was able to correctly predict clients’ tastes and likes.

“I made a ‘doctor cake’ for a doctor in Masaka and the cake had newspaper wordings with Masaka politicians appreciating Dr So and So. The cake was ordered by a daughter in-law. So, this guy called her aside and said, ‘does this person making the cake know about me?’ But even the daughter in-law didn’t read until the cake got there, because she did not see it until it got there. She also asked me, ‘leaving Mzee’s expressions aside, I also want to know. I didn’t tell you this, Mzee is not on Facebook that you went and read about him’. But of course, for me having known that he is a doctor who has practiced over time, I could imagine the level of people he relates with,” he said.

If you are a fan of Cake Boss on TLC, then it could be safe to call Kyomukama Uganda’s Buddy Valastro, the Italian-American chef who has found international fame in making custom-ordered cakes that imitate reality.

Cognizant of the health consciousness of many Ugandans now, Cakey has ditched milk and replaced it with the healthier soy milk and also replaced artificial sugar with natural sugar extracts.

Kyomukama says their cakes are particular on sugar, carb and calorie levels and are, therefore, within admissible limits. And with four layers in one, every age group is catered for from children to adults, with the French vanilla that appeals to all uniting them. 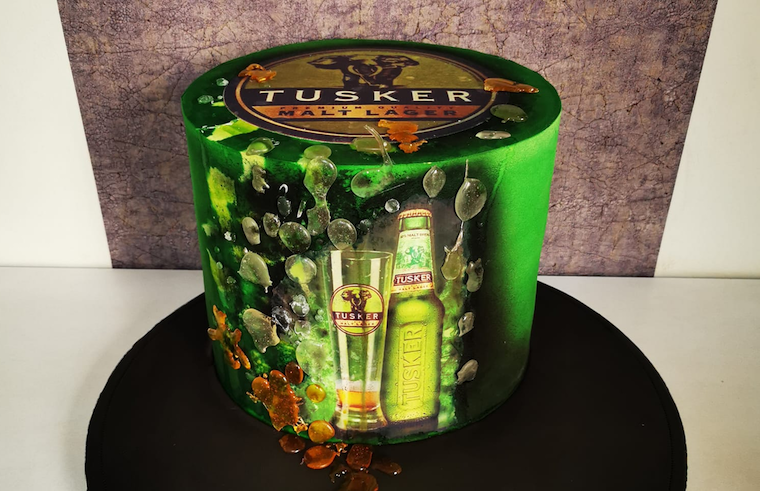 Where many bakers in Uganda have perfected the deliciousness and ingredient balance in a cake, Kyomukama has mastered the artistry and sentimentality that goes with that perfect taste.

Everybody who comes into his office must switch to spotlessly clean white Crocs provided at the door. Kyomukama, who declines to say how old he is or give details about his family, claims to have trained Uganda National Bureau of Standards (UNBS) in food hygiene and safety.

Then three years ago he started a baking school where he teaches with his wife, but like everything else about this man is unconventional, there's always people waiting in line for an opportunity to be trained and as such, advertising a class, he says would overwhelm them.

“When I advertise, I attract everybody but that is not my intention, that is why I don’t even have signposts. I believe by the time you find yourself here, you’re meant to be here. You’re meant to be in my line of work. For me, that is a selection method. It is strange I guess…,” he says. 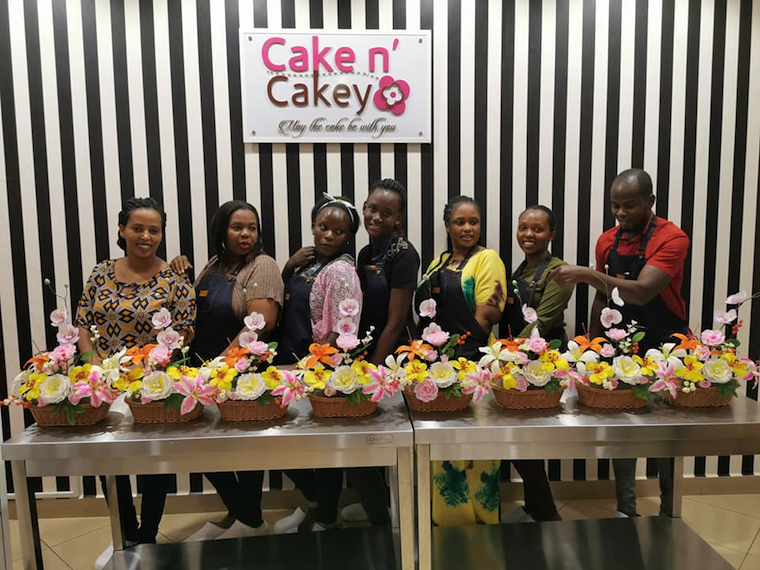 Asked if fear of competition is the real reason he wants to admit very few students into his baking classes, Kyomukama says that is far from the truth, since he can’t satisfy the current market even with all the time on his hands. For example, he says, sound affects how a cake forms and comes out from the oven. If there is a noisy construction site in the neighbourhood, it is better to wait – the reason he bakes in the night – when it is all quiet.

In any case, he says, he is more advanced in baking and is just waiting for the baking society to catch up before he unveils other new concepts such as sugar blowing.

“I don’t believe that if I light other candles mine will die out. We are 40 million people and there is nobody who will be like me. In fact, sometimes when I get orders, I refer them to my former students and some people say, but what if the clients remain there?”

Kyomukama’s small classes are all about training bakers who will give the profession the respect and attract the money it deserves. His classes attract doctors, marketers, engineers and other professionals from Kenya, Ghana, Botswana and Tanzania, among others.

“There should be a time when you’re proud to say my sister is a baker…I want to see this industry get the space it deserves.”

Although The Observer was served four different cakes for tasting, apart from the obvious chocolate, vanilla and mint flavours, it was very hard to distinguish the exact flavours Kyomukama uses in his spongy cakes.

And for him, “That’s it. When you get the balance, that means you got it right. Nothing should be able to stand out. If it is nice, it should be all-round nice…In food presentation and design, that is how it is supposed to be.”

He says Cake n’ Cakey has its own recipes, which obviously he does not share with the public.  True to his word, the cakes have a noticeable lower sugar level which he says makes them healthy for anybody to eat whenever they want.