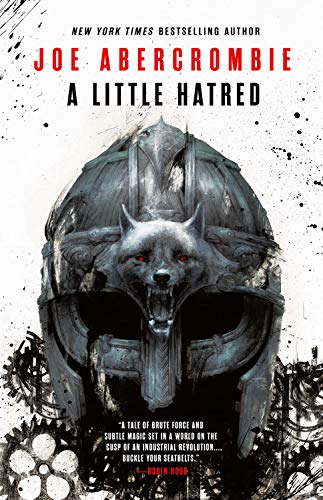 A Little Hatred is the first novel in the Age of Madness trilogy, which is a sequel to the First Law trilogy. I often describe First Law as “Game of Thrones, but better”.

Game of Thrones is amazing, but it is also bloated. George R.R. Martin tends to kill the momentum of his narrative with plot threads and characters that ultimately don’t matter.

First Law is what would happen if you trimmed Martin’s books of all their fat. But Joe Abercrombie knows how to get to the point. So, what went wrong with A little Hatred? Well, nothing, actually. This is not a book review.

You can’t review something you did not finish. I probably read 100 or so pages before dropping the novel. Was it boring? Yes, but not for the reasons you think.

This is the problem with fantasy. Most stories are told over a collection of several novels, and that is perfectly fine until you get to book nine out of 12, and then you realize you can barely remember what happened in book one.

I loved the First Law trilogy. Last Argument of Kings succeeded as a finale because I had grown to care deeply about Logen, Luthar, West, and the rest of them.

I could not wait to read the standalone novels that came after because I wanted to lose myself once more in the world Abercrombie had introduced in The Blade Itself.

I was not disappointed. Catching up with Logen in Red Country was exhilarating. The Heroes was shocking, because it added depth to several side characters. Best Served Cold was the best of them; better than Last Argument of Kings.

Abercrombie’s Shattered Sea series, which followed his First Law novels, has some merit, but I could not understand why he had abandoned the First Law setting when it still had so much potential.

I saw a Facebook post hinting at Abercrombie’s plans to revive the world of the First Law trilogy and I was excited. But once I opened that first page of  A Little Hatred and read that first chapter, I was astounded to realize that I no longer cared. Too much time had passed and my interest had waned.

To be clear, A Little Hatred is not bad. Rikke is a great character. The same goes for Savine, Leo, and Orso. The novel was well-paced. At no point did the story drag.

Things were happening all the time, things that should have entranced me. But I was not engaged at all because I was no longer interested in exploring the lives of the children of the characters that had given me so much joy in the early 2010s.

That is not Abercrombie’s fault. He gave us all the stories he was ever going to tell where Logen, Luthar, and the rest of the old cast is concerned.

Maybe A Little Hatred would have appealed to me if it was set centuries in the future. That way, I don’t have to spend every new chapter waiting for the characters I like to make an appearance.