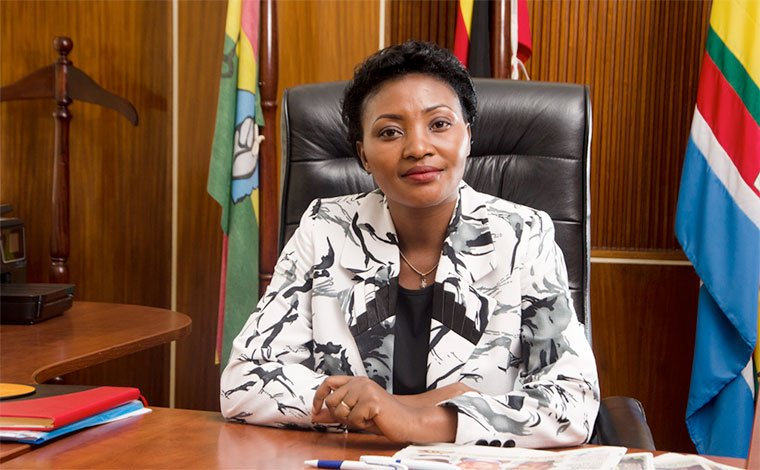 Winifred Kizza, 47, was the leader of the opposition in the Ugandan Parliament from May 2016 until August 2018. She is the MP representing Kasese district women in the 10th Parliament. Quick Talk met her at Acacia mall, where she was formally dressed but very approachable.

I’ll let you introduce yourself…

I am Winnie Kizza. I come from Kasese district, I was born in a village called Kalambi in Kisinga sub-county. I represented the sub-counties of Kiyondo and Kisinga in the District Council of 1998 to 2005 and during that period I served as the secretary for finance and administration in Kasese District Local Government, [later] served as secretary for social services and then came to Parliament in 2006 on a Forum for Democratic Change [FDC] ticket. [I am still an MP] until the next election.

I notice the emphasis on ‘until’…

Until May, because I am not seeking re-election.

But your people still want you!

At the beginning of this term, I shared with some elders that I wanted to practice what I preach. I have preached about overstaying in power and thought serving more than three terms would be against my preaching.

Very gallant! Does that mean you’re done with politics?

No, I will continue working with others for change. My struggle will continue for good governance, rule of law, human rights, respect for all, justice and of course education and empowerment of a girl child.

So unusual for a Ugandan politician!

Well, there must be politicians with a difference and that’s how I was raised; one has to fulfil one’s promise. If I have been telling other people to leave power, then it would be unfortunate if I didn’t leave.

I don’t want to be the person who will carry the whole [load] from beginning to end and imagine that Kasese cannot survive without me. [That sounded like a veiled jab at somebody, but what does Quick Talk know; she is no politician!]

Have you accomplished everything you needed to do in parliament?

Of course you may not finish everything, because every day brings its own challenges. You may wake up today knowing you are going to do something and then other things happen.

You can wake up knowing you’re going to office and get arrested along the way…so, I have left many things undone. I am still struggling for people who have been in cells, and justice for those who were murdered… it is something that hurts me.

I am still available to follow that up, but this is not all about me; others have also laid foundations from where we started. I have also played my part and others will build from there.

How did you end up in politics?

Politics has always been my passion. I grew up in a political family. My mother and father were politicians. Then I grew up from an uncle’s home who was also a politician; so, I have somehow lived it since childhood.

I grew up knowing that I should change the world around me and be part of the people at the helm of policymaking. I thank God that He has enabled me to do that.

You appear so brave! Were there scary moments though?

Yes! They tell you they are coming to arrest you [and you feel scared], but then I would get this other feeling that come what may, I know that I have not done anything wrong and will be found innocent… I eventually find myself moving on.

How have you juggled politics and family?

It’s about creating time. I am a family woman with children and a husband [Yokasi Bihande Bwambale], but then I also have a political party, parliament and a constituency. All these need my attention.

So, one needs to know how to balance their time; when you say this day is for family, then let it be for family. You don’t have to complicate matters.

But how do you do that?

I have always made sure that my children understand this, because they are part of my work. Even now, they are aware I am having a journalist with me. [Laughs]

[For my husband] The good news is we are both politicians; God gave me a husband in the same trade like mine; so, we understand the schedules of politicians. We sit together to see how to handle challenges.  I am always thankful to God for a matching partner.

What has been your most memorable political moment?

[Thoughtful] I have really enjoyed myself in politics, but the [most special] moment was when I got re-elected in a by-election. [In August 2012, Kiiza beat NRM’s Rehema Muhindo after the former’s 2011 win was contested in court.] This by-election looked like a national contest.

All guns were in Kasese. President Museveni camped in Kasese for three days and all the officers of the army and police were in Kasese. I thank the Kasese people for they showed their love and support despite all the guns and intimidation. This has been one of my happiest moments.

And the most annoying?

When they amended the constitution to remove the age limit. And the other one is when the palace of Rwenzururu was attacked and people were innocently and brutally murdered. But the lifting of the age cap was more annoying.

So, are all politicians liars?

Not all politicians are liars, but the greatest liar in this country is President Museveni.

In 2001, he told the whole country he was seeking election for the last time. Even when you ask Honourable Miriam Matembe, she will tell you she moved the whole country telling people that Museveni was serving his final term. She came to Kasese and said, “please, omushaija mumuheereze akaruuru [give the man votes], he is serving his last term”.

Little did they know he was going to remove the term limits. Recently he deceived Ugandans that he was removing the age limit so the young people can be able to contest for president, and the young people supported the [amendment] believing it was about them. [Her eyes widened] But the man is not going! So, individuals but not all politicians, are liars.

I’m not a commodity to be ‘buyable’. I am always driven by my conviction and passion. That’s why people say I am not buyable; but, make me understand something that has no corners in it and I will follow you. I always tell those that want to buy me for wrong reasons that please [adjusts her jacket like a boss] I’m so comfortable.

Are you taking up a presidential appointment?

Under President Museveni? NO! He is a liar.

Did the decision to retire have anything to do with your return on the FDC ticket not being assured?

That’s the unfortunate thinking of [some] people. This is [a target] I set myself four and a half years ago; so, whether FDC has problems or not, it’s something I started the term while [knowing].

This is neither about FDC nor Alliance for National Transformation, nor People Power or any other political party. I think it’s something people have never seen happen in Uganda.

Why does FDC have such disunity?

Disunities are everywhere, even in families, NRM and other political parties. It’s only that people focus on FDC. Political parties are made up of human beings and some are naturally born as conflict machines and others as peacemakers; bringing these two together sometimes causes conflict.

🔹 Kiiza was born on November 26, 1972 to Modesty Muke and Kanyere Constance Muke.

🔹 Her father died when she was 10 years old.

🔹 Kiiza taught at her alma mater, Kisinga primary school and at Saint Maria Goretti School, before working as a tour guide in Queen Elizabeth national park.

🔹 When she was Opposition Chief Whip [2012 to 2014], her husband Bihande was representing Bukonzo East in the ninth Parliament.