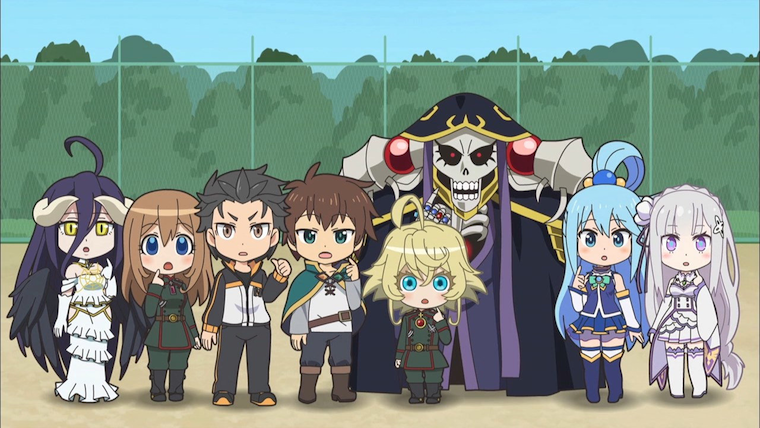 Every time I come across a decent Isekai, I’m tempted to conclude that we have entered some sort of golden age.

It takes me a while to remember that Isekai is a genre that produces dozens of new anime each year. That one or two Isekai are good is not shocking. Isekai is a genre of anime in which the protagonists are transported from the real world to a fantastical setting, one that has magic and sometimes mirrors an MMORPG (massively multiplayer online role-playing game).

The only people aware of the rules and quirks that regulate their new world, these protagonists must use their knowledge of gaming and fantasy fiction to carve out a place for themselves. Sword Art Online is Isekai. So is Log Horizon, and Slime, and Overlord, and many more. Isekai is a kind of wish-fulfillment fantasy for people with an interest in video games.

It also appeals to the masses because the worlds the protagonists inhabit have strict structures when it comes to combat. Their abilities are neatly categorized, so it is easy to chart their potential for growth.

You also get the fun of watching them grow through the use of gaming mechanics. But Isekai is also tiresome. The genre produces the same protagonists and plots which is why, for some of us, it is the stalest genre in anime. But every so often you stumble upon gems such 8th Son. Well, that is an exaggeration; 8th Son is no gem.

But every time I come across a half-decent Isekai these days, I can’t help but get excited. The best Isekai stand out because they have found a way to break the mold of the genre or to introduce an unexpected element. Overlord kept transporting the protagonist to a world in which he was the villain.

Defense Shield, my favourite anime of 2019, was just fun. It eliminated all the stakes and emphasized the excitement of a new gamer participating in all sorts of wacky adventures. Shield Hero took the serious route. Isekai is saturated with serious anime, but Shield Hero stood out by creating great character dynamics and conflicts.

None of those shows relied solely on the novelty of a normal protagonist suddenly waking up in a fantasy world governed by gaming mechanics. This brings us back to 8th Son, which ticks all the boxes of an Isekai.

You have an older protagonist, a man with a life and a job who sits down to dinner one day, falls asleep, and then opens his eyes to find that he has been transported to a European style kingdom filled with magic and adventure.

The eighth son, ridiculed and dismissed by his parents and siblings, Shingo’s only hope is his magical abilities which he must keep a secret. 8th Son is still new, just six episodes in, so you might as well jump aboard now. The characters have piqued my interest. Hopefully, the show develops into much more.