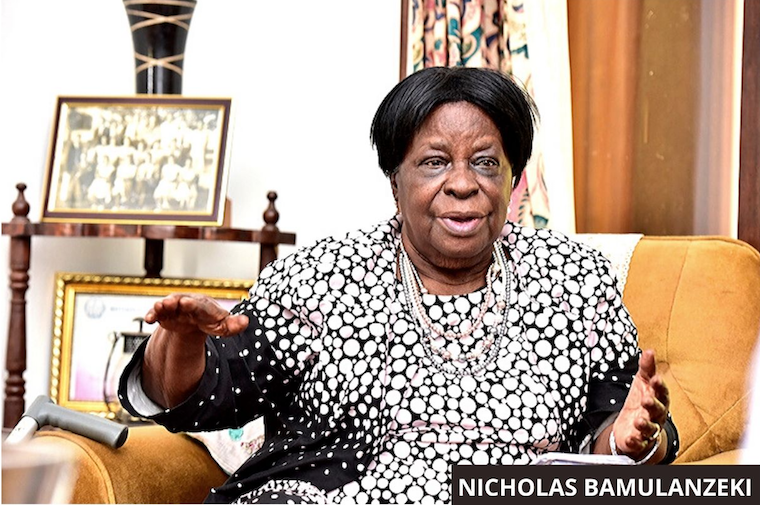 In her highly-acclaimed 2019 book, It’s A Pity She’s Not A Boy, former minister and educationalist Joyce Mpanga paints one picture of the Idi Amin regime of the 1970s, and how politicians often got drunk on power at the expense of the people they served.

In the book, Mpanga talks about the day she went to Moses Ali for such authorisation, because her husband, former Buganda Attorney General Frederick Mpanga, had pancreatic cancer and needed to travel to Kenya for treatment. Without even looking at her, Ali reached for Mpanga’s documents and without even glancing at them, reportedly tore them up and dumped them in a dustbin.

That was the beginning of Frederick Mpanga’s health deterioration that gradually led to his death, something that could have been avoided had Ali not acted so highhandedly.

“NRM was not a bad thing, because I forgave Moses Ali, which I didn’t think possible. But when I became a cabinet minister, as I sat down for the first cabinet meeting, who sits next to me? Moses Ali. We talked – I had no choice,” Mpanga said during a recent interview at her home in Lungujja.

Another time while planting trees in Mabira forest with Victoria Sekitoleko, the then Agriculture minister, Sekitoleko announced that Mpanga and Ali would plant a tree together. And during a trip to the USA (for Mpanga) and Brussels (for Ali) the two shared space in the airport VIP lounge and talked.

“I stopped minding him.” Then Moses Ali went to jail at some point in his career, and when he walked into parliament the first time after being released, “whom did he find? Me. And he said, ‘please congratulate me, I am from jail’.” “I laughed and thought, I am a Christian. I need to forgive this man. Because he did not seem to remember. I chose not to remind him, and if he remembers, he has never talked to me about it.”

Although Mpanga has many stories about the Amin regime, she chose to leave most of them out of her book “for national unity”.

Mpanga said Henry Kyemba’s book State Of Blood, for example, was heavily exaggerated, yet it sold; she did not want to base a book on facts she could not quite back up. In her book, she also talks about her struggles as a girl-child resisting early marriage at all costs to pursue an education, eventually becoming an icon of education and educationalists in the country.

“The pressure to get married started when I was 13!” she recalled, speaking fondly of her father, Asanasiyo Masembe, a loyal servant of Buganda kingdom, who died for king and kingdom during the 1966 crisis.

It is presumed her father – a man who valued education and made sure his eldest girl got a good education – died when Apollo Milton Obote’s troops raided the Lubiri that day in May 1966. His remains have never been found.

When Mpanga talks about that period, her voice still wavers with a mixture of lingering sorrow and anger; sorrow, because she was particularly close to her father, and anger because she was also close to Obote’s wife, Miria Kalule Obote.

“I had never been in Kabaka Yekka. I was UPC. In 1966, I fell out with UPC and became nothing. I don’t even know where my father was buried. Miria was my very close friend and I can say maybe Obote got to know her through me when I was in LEGCO (Legislative Council). But Obote never even warned me as a friend that stay away from the Lubiri, because this is going to happen…”

The close friendship suffered after 1966, although Mpanga said she still considers Miria Obote her friend. With an enviably sharp memory, Mpanga still has many opinions concerning land issues (she believes the current problems have been caused by the NRM government), Universal Primary Education, Buganda kingdom (1966 “was about resistance, not rebellion”), and parliament (“We have lost a parliament. Parliament has become an occupation, because of the money.”)

Naturally, it was the topic of education that elicited the most passionate responses from Mrs Mpanga, maybe because of her many years leading the teachers’ association and her work as assistant secretary to the East African Examinations Council and later as deputy chairperson of the Public Service Commission.

Recently, government rolled out a new curriculum for O-level students, starting with this year’s S.1 intake. The new curriculum has kicked out a lot of the theory and put more focus on vocational subjects.

“But these people…those children are not guinea pigs! The curriculum they are demonising is what groomed us. It has the values of education; we can Africanise it. This generation is prioritising money too much,” Mpanga said.

“The child we are sabotaging is the exceptionally bright one, just because we want all of the children to be at the same level.”

She prides in the education she had at Gayaza High School, which included needlework – a vocation she is still good at – but pointed out during the interview that needlework was never studied at the expense of her other subjects.

“Not all of us are good at using our hands; and when planning for many students, the many alternatives were the best.”

The former History teacher said it is important to learn some things, however irrelevant they may seem in the moment, but they teach students to reason and “they lie latent in you” for use later in life.

Given a chance, Mpanga said she would tell the president he was wrong in appointing his wife the Education and Sports minister, just like she told him years ago he was wrong giving Dr Speciosa Wandira Kazibwe the Agriculture ministry when she was also the vice president.

Mpanga reasoned that Janet Museveni is already busy enough with her First Lady roles, despite her having a degree in Education.

“Not only did she miss practical teaching, but also as First Lady, her technical team cannot freely critique her. She has [Chrysostom] Muyingo, a professional teacher, but he has commercial interests [as an investor in the industry]”.

But Mpanga is happy with how full-time Rosemary Sseninde is, when it comes to her role as minister of state for primary education. The future of Education Mpanga is also not blind to the struggles of UPE, a policy she took part in formulating as minister of state for primary education, but hoped at the time that government would have commitment, train new teachers first, and examine to see if the economy could handle it.

“UPE should have been implemented in pieces, but the political pressure did not allow us to prepare well.”

UPE started in 1997; so, its planning and hasty panel beating happened with a general election looming. Mrs Mpanga is also concerned that each UPE child gets Shs 10,000 from government per year, which leaves school teachers’ and administrations’ hands bound.

To avoid the mishaps that have happened with UPE – including thousands of children going without meals at school – Mpanga said she would recommend that the new curriculum be put on hold; after all, “Uganda has never changed an education system without a commission”.

Yet Mpanga is also concerned by how commercialised non-UPE/USE education has become. Students at HSC, for example, are now forced to study subject combinations that are strategically more likely to garner the maximum 20 points in UACE and make the school commercially shine, as opposed to what is best for the student’s future.

At 87, Mrs Mpanga loves her flowers and her Lungujja compound is littered by rose bushels and other flower types.

“Everywhere I go, I come back with a flower I love. I have a big compound that helps me relax at the end of a long day. But it is difficult to maintain.”

When we visited, she paid Shs 50,000 to a man to cut the grass in the expansive compound, and she was supervising painters at the home.

“I wake up at 11 am. I don’t see anyone before 11 am. I spend most of my day seated in that chair [an armchair by the French doors opening into her garden] with my daily papers. That is my office.” 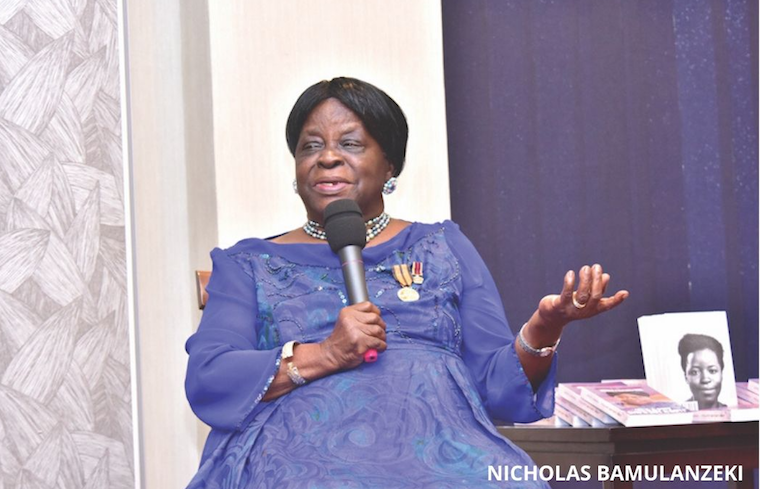 Born Joyce Rovincer Masembe in a big family in Kassanda, Mubende district on January 22, 1933, we found Mrs Mpanga still mourning the passing of her younger brother, Prof. Richard Bwogi Kanyerezi, and she was not pleased with how low-key President Museveni’s respects to her brother were.

When Kanyerezi died, Museveni, who was conducting his recent 195km-walk in the countryside, called Mpanga on phone, but has not made a physical visit. Kanyerezi, according to Mpanga, spent a lot of time in exile in Kenya, due to his proud financial support to the National Resistance Army, the guerrilla outfit that Museveni led in the 1980s, which gave birth to today’s Uganda People’s Defence Forces and NRM government.

But those slight grievances aside, she is a contented mother and grandmother, basking in her children’s success (Lydia Sebuyira and David Mpanga are her biological children, although she raised many more), as well as that of the numerous grandchildren that occasionally run around the big 1958 house in Lungujja, which her late husband had in mind for his big family.

With a career starting in 1958 as a teacher at Makerere College School, through to being a deputy headmistress at Gayaza High School, heading the teachers’ association (now Uganda National Teachers Union), to becoming a legislator, cabinet minister, and later member of the Buganda Lukiiko, few Ugandan women come as decorated as Mpanga.

And since her book was aimed at inspiring rural girls into knowing that all their dreams are valid regardless their humble beginnings, she can only hope that It’s a Pity She’s Not a Boy reaches as many of them as possible.

Many Ugandans have not bothered to tell a story of their lives or even comment on key events that have shaped the country like the 1966 Kabaka Crises.

You have risen above this and the next challenge will be to make your book widely available on sites like Amazon and google outlets for your readers.
Report to administrator
0 #3 Moody S 2020-04-08 19:44
What a sage - great thinker.

It is important to learn some things however irrelevant they may seem in the moment for they teach students to reason and they lie latent in you for use later in life - true.
Report to administrator