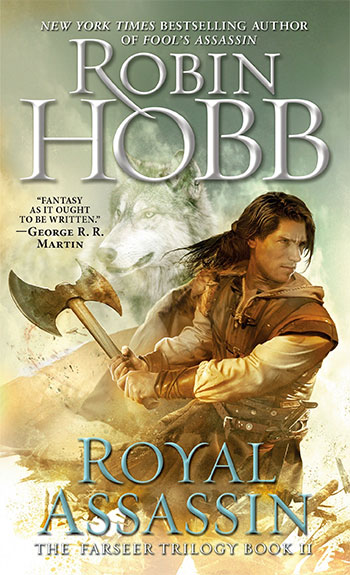 Fantasy fiction is a massive genre. Most people prefer to wall themselves off in their own little sub-genres. But every so often, you come across authors like Robin Hobb that can write for everyone.

The Farseer trilogy works because it has a little bit of everything. And that is particularly true for Robin Hobb’s Royal Assassin, the second novel in the series. The overarching plot is fascinating. The Six Duchies have stood unopposed for so long that they have grown complacent.

When an old enemy returns, they have neither the strength nor the will to fight. That, on its own does not sound that intriguing. But then you have the mystery at the heart of this conflict. What do the Red Ship Raiders want?

Why burn and pillage the coast when they could invade and conquer? And how do they turn their captives into mindless beasts that must now roam aimlessly, killing and stealing?

If that still doesn’t intrigue you, the novel is rife with politics. The Six Duchies needs a navy, but that costs money; and why stay bound to a King that is slowly succumbing to some unknown disease, lost so deeply in his physical and mental aches that he is barely lucid?

Chivalry would have stopped them, but he’s dead. All they have is Verity, the King-in-Waiting, a frail man that shows no concern for the suffering of his people. The youngest of Shrewd’s children, Regal, knows the sacrifices Verity makes, that he spends every waking hour using his incredible gifts to reach across land and sea, and it is sapping every ounce of strength he has.

If all that sounds too stuffy and convoluted for your liking, you still have Fitz, the young protagonist at the heart of this story, a boy whose soul is slowly eroding under the weight of all the lives he must take to prove himself worthy of his grandfather, King Shrewd’s trust.

Fitz desperately wants to live up to his dead father’s name. He knows that all the secrets he keeps and the lies he tells will ultimately bring his relationship with Molly, the only girl he has ever loved, to ruin. But he has no good choices.

Everyone wants to use him, to abuse him, to love him; and he wants them all, to kill for them, to kill them, to prove himself worthy of their adoration; but there isn’t enough of him to go around.

If you want action, Royal Assassin has that as well. The book has something for everyone. And while it is ridiculously slow in some places, he pay off is more than worth it.

By the time you finish Royal Assassin you will love Kettricken and pity Verity. You will hate Regal while growing to despise Chade and every other adult protagonist in the novel because they are all such fools. The finale takes a dark turn but that last chapter will leave you yearning for the final novel in the series.