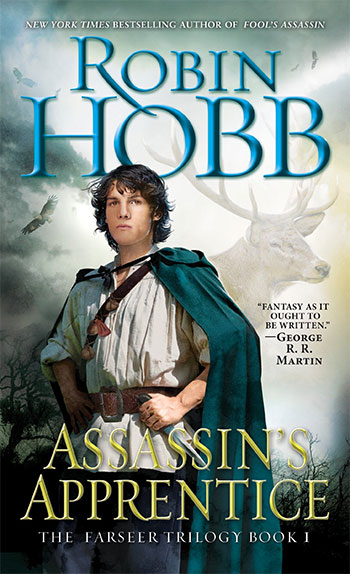 The Coastal Regions of the Six Duchies are in dire straits. Deadly enemies known as the Red Ship Raiders have begun a savage incursion into Six Duchies territory. But their stratagem makes absolutely no sense. They keep burning and pillaging and dragging poverty-stricken Six Duchies citizens off to their ships as hostages for a ransom.

When King Shrewd refuses to pay, they will return the hostages, a move that initially makes no sense until the raiders follow through and the kingdom starts to crumble. Assassin’s Apprentice is a story of war and politics, one that follows an aging king and his ailing son as they attempt to safeguard the interests of the lords that keep their coffers full.

King Shrewd knows that, with each coastal village that falls, with each life he fails to save, the trust of his people fades; this only emboldens those vassal states that are fighting to escape the leadership of his court.

Meanwhile, his son is all but determined to give his life to save a population that has rejected him in favour of his flamboyant but mostly useless brother. All that is merely the backdrop to the real story driving the first novel in the Farseer trilogy.

Assassin’s Apprentice is Fitz’s tale first and foremost. But even if you approach the novel from his perspective, there are still so many paths you could take in your attempts to describe the story.

Abandoned by his maternal grandfather at the age of 6, Fitz learns that he is the bastard child of Chivalry, the future King of the Six Duchies. When Chivalry abdicates his throne to keep the boy safe, Fitz’s life takes a wildly dramatic turn as the various forces of the kingdom start pulling at him.

King Shrewd wants to turn the boy into a weapon. Chade, Shrewd’s assassin, is looking for an heir to take over his unsavoury duties. Burrich, his caregiver, is determined to keep Fitz from embracing his gift, that which others call a curse.

And then there is Galen, the man charged with teaching him to hone his family’s telepathic ability; except that Galen would sooner kill Fitz than help him. There are so many moving pieces in Assassin’s Apprentice. Robbin Hobb finds a way to juggle all of them, a testament to her skill.

Your ability to enjoy this novel will depend on your opinion of Fitz—a lot of readers hate him.

So, he’s whiny, excessively, to the point of annoyance. But you also feel for him. He desires greatly to find a place to call home. As his failures start to mount, Fitz is assaulted by an overwhelming sense of loneliness that seems to permeate this entire novel.

He whines and mopes and moans, and if you can stick with him during these insufferable moments, you will love Assassin’s Apprentice and you will seek desperately to follow him on a journey through a world in which Heroes are rarely rewarded.

You will also grow to hate some of the characters in this book like you have never hated anyone before, especially Regal and Galen.