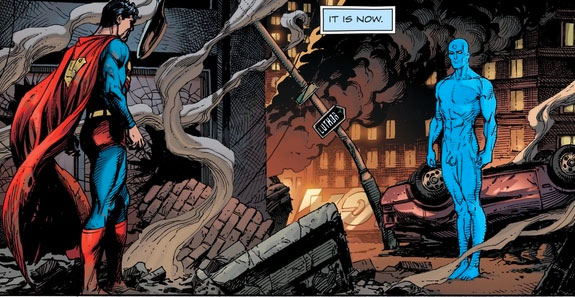 So caught up was I in the hullaballoo of Star Wars in December that I forgot about Doomsday Clock. It was finally published, the most anticipated comic book issue of 2019.

I think I said somewhere that every major finale in 2019 had failed to live up to the hype except for Endgame. But I was wrong. Doomsday Clock did it.

Geoff Johns actually succeeded in giving Doomsday Clock a finale worthy of applause. Did it give us all we expected? Well, it depends on what you expected. If you wanted a sequel to Watchmen, this was not it.

Johns called Doomsday Clock a standalone story even though it picks up where Watchmen left off and ultimately provides some closure to Alan Moore’s original story. I was immensely satisfied, and in ways that I did not expect. This is partly due to the fact that I love Superman, and I hate the way he keeps getting marginalized in favor of Batman.

Doomsday Clock returned Clark Kent to his rightful place at the top of the DC pantheon. Someone somewhere said that the miniseries had literally made Superman the center of his universe.

It isn’t a wrong interpretation. Doctor Manhattan destroyed and ultimately remade the DC universe because life, as everyone knows, it could not exist without Superman. And this is what the blue fellow could not understand at first.

No matter how drastically he altered the timeline, Superman always emerged an inevitable force for good; an unchanging monolith, younger and harsher in some cases, older and wiser in others, but always present.

Why? Because Clark Kent is the universe’s greatest symbol of hope, a beacon of light, the strongest of heroes, but also the humblest and most human of them all.

Superman defeated Doctor Manhattan, not with the power of his fists or his vast array of abilities, but with kindness and mercy. Yes, that sounds corny. Had I seen this described on paper, I would have gagged. But the execution works.

Superman saves the universe because he gives Manhattan a reason to hope. Because of that hope, Manhattan returns the DC Universe to its brightest, most hopeful version, destroying the strife and hate he had sewn.

And once he is done, he returns to the Watchmen universe and fixes it. Doomsday Clock had a shaky run. The middle chapters were particularly clunky. But this finale does such an amazing job of bringing the story to a close that I cannot help but perceive the entire saga in a positive light.