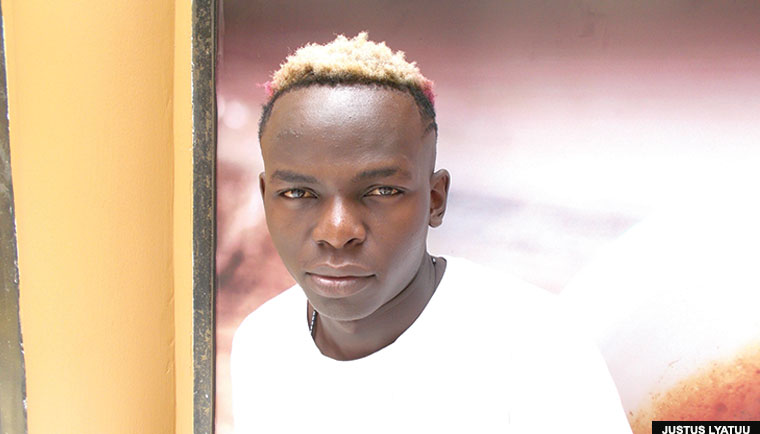 If there is any singer who has dominated the music scene this year, it has got to be John Blaq. The 23-year-old artiste blew up the music scene last year with hits including Makanika, Obubadi and Tukwatagane, among others. It is, therefore, no surprise that he has decided to stage his maiden concert dubbed Aya Baasi this Friday at Freedom City. Quick Talk caught up with him during rehearsals at Emrod studios.

Could you tell us about yourself and background?

My real name is John Kasadha. I am a Musoga born in Jinja but I grew up in Bweyogerere with my aunt who paid for my education because my parents were too poor to afford it. I went to Lwanda and Hassan Tourabi primary schools and then Bweyogerere SS for O and A-level. After my A-level, I decided to join music [the gamble worked, brother!]

How did you start?

I started music in high school. They used to organise rap battles at school and I got the urge to take part. Surprisingly [really?], I always emerged the winner and that’s how I knew I was good at this.

So, you started out as a rapper; how come you are not a hip hop artiste?

Well, you have to know what the market wants and when I looked at our market, hip hop was not doing well and it was difficult to earn money from it. Given the fact that I could do other genres, I decided to move with the trend. But I still have a passion for hip hop and I do it for my own pleasure.
I am versatile. I can do raga, dancehall or hip hop.

How has been your musical journey so far?

The reception I have got from people has been so overwhelming, people do like every song I release; my brand has grown in such a short period of time and I have been able to secure big endorsement deals. I thank God for that.

Why is Aya Baasi your signature slogan?

Aya Baasi is like a trigger to start going. I use it as my signature because whenever I would be in studio starting to record a song, I would just say it naturally and surprising people liked it; so, I decided to use it as my trademark.

You broke through so fast!

I have just been so focused and patient, plus I have surrounded myself with good people who have guided and prevented me from making unnecessary mistakes. But above all, I also pray a lot, because God has really been there for me.

You have become a huge star at such a young age, how are you handling the limelight?

I have continued to be humble and I think everyone around me can testify to that and as a believer, God does not allow me to be taken up by earthly things; so, I have learnt that even if you are on top of the game, you don’t need to brag and show off.

Two years in the game; do you consider yourself established?

Yes, I am now an established artiste and I thank God for that [John Blaq seems very grounded spiritually, meanwhile].

You have an upcoming concert…

This is going to be my very first concert and I am very excited about it. It is [this Friday] at Freedom City and thereafter I will be going to TransAfrica in Jinja and Agip Motel Mbarara on 30th and 1st, respectively.

Isn’t it too early for a concert?

I don’t think so; I first consulted from different people. I have performed in different parts of the country and seen how people appreciate my music; so, I decided to put up a show for them. I am finalising rehearsals.

What should your fans expect?

I want to keep everything as a surprise, but of course they should expect something they have never seen before from John Blaq. I know I have already performed on so many stages but come this Friday, everything is going to be so different.

Is there anyone you attribute your success to?

My managers, Norman and Tony, and of course the entire Black Magic Records, because it is a big team.

I wake up in the morning, prepare and go to studio to try and find a way of recording another unique sound so that all my songs do not sound the same. When I am not in studio, I check on friends, relatives or sometimes just stay at home and rest.

Is there a special lady in your life?

Not yet, I have not got anyone but I think with time, everyone will know.

What about the Vanessa we hear about? [The singer is rumoured to be dating a one Vanessa who happens to be Ziza Bafana’s ex-girlfriend].

[Laughs] That was just a name I sang about and so many artistes have sung about ladies’ names, but maybe fans got a different concept.

I just need a woman who is God-fearing, humble and respectful. That’s all.

If you weren’t a singer…?

I would be a dealer in general merchandise like gadgets, cars or other electrical appliances. I have ever done it before.

You will share a stage with Wiz Kid when he comes here next month, how excited are you?

I am super excited to have an opportunity of singing on the stage with such a big artiste. I will try my best to get him to do a collabo, because he is a huge star and doing a song with him means it is going to push my career further.

Where does John Blaq see himself in the next five years?

I will be among the top five artistes in East Africa [Quick Talk believes him].

Which artiste inspires you?

Locally, even though he died, Mowzey Radio still inspires me a lot. His lyrical maturity and voice were really phenomenal. Outside Uganda, I look up to Burna Boy [Nigerian]. I really love his style.

I just want people to still love and play my music all the time even when I’m gone, like how it is for Philly Bongoley Lutaaya and Radio.

Last remarks to your fans...

First I want to thank my fans for loving and always pushing my music, which has enabled me to get to this level in this tough music industry and I am calling them all out to come to Freedom City this Friday and support me.