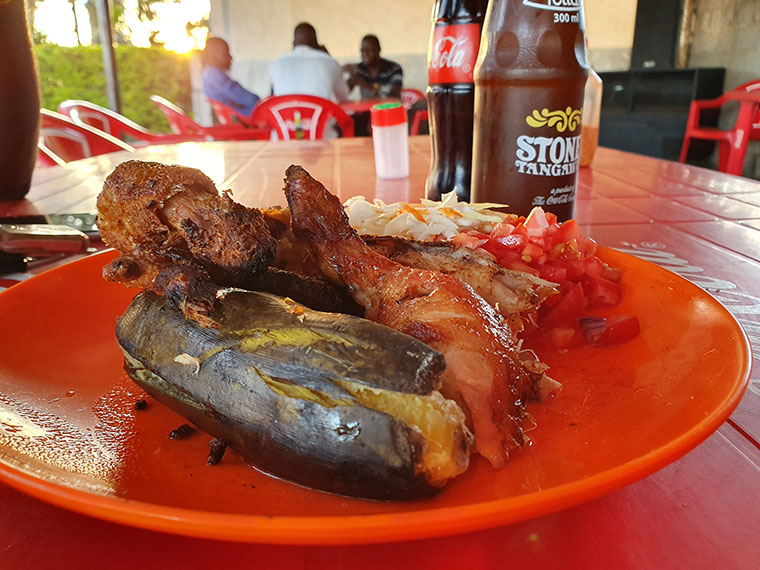 When Hazari Rolling Chicken was forced to relocate from Bukoto to their chicken park in Kisaasi, I was one of the skeptics.

The story behind the shift is that the landlord in Bukoto asked Hazari to find an alternative space, because he wanted to develop the area. Having seen the huge numbers, the landlord then set up exactly the same business. But as if in protest, the clients followed Hazari to Kisaasi.

When The Observer visited last Sunday, it was the usual high clientele numbers. The number of Safe Boda picking orders or the trays leaving the kitchen and chicken bones coming back from clients, tell of how popular the place is.

There was hardly any parking space or empty seats. Don’t come expecting five-star treatment of fancy seats, colourful plating or garnishes, meanwhile. It is a place strictly for chicken mchomo – charcoal-grilled at that. And they stick to the basics.

Bar the environmental concerns and guilt, charcoal-roasted meats tend to retain their natural flavours and juices. And that is how Hazari chicken is. It is very well-seasoned and balanced and is extremely tasty.

For the first-timer, you are left in wonderment when you see someone (women inclusive) order for a full chicken and ‘clear’ it in one swoop. But when you eventually taste it, you too can easily be tempted to order for the remaining half.

The chicken skin is crisply tasty, while the meat is tender-soft and the hard bones suggest it is kroilers, which have a better taste than broilers. A full chicken costs Shs 22,000, half at 11,000, a piece at Shs 6,000.  The chicken is served with roasted unpeeled matoke and salads.

How many ordinary Ugandans can afford to buy those chickens? That is the question.

If u reading observer online then u probably can afford
Report to administrator
+1 #3 Lysol 2019-11-18 00:42
Mugisha,I can afford anything I want. I was talking about ordinary poor Ugandans like you(maybe) That fried chicken look too dried for my taste.

I always go for Kentucky(the Uganda one is not even close).I know your one M7 is allergic to chicken and fish.

That is what many killers always do..Even one Hitler was allergic to meat products. It reminds them of the people they have killed.
Report to administrator