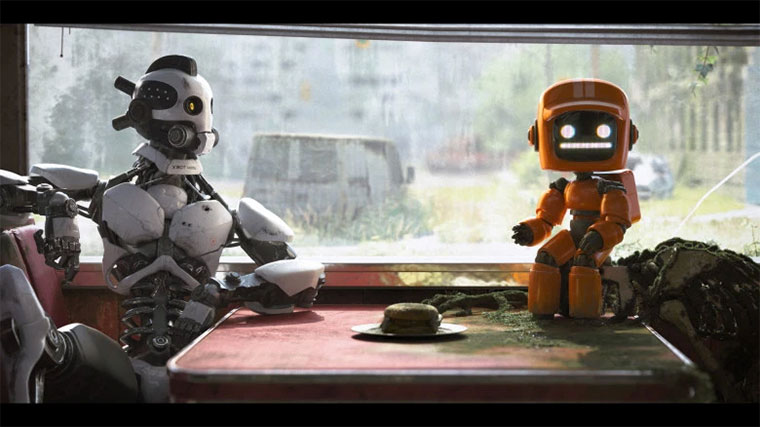 The Witness is the best episode Netflix’s Love, Death, and Robots has to offer.

Sonnie’s Edge episode was a disappointment in many ways. And yet it earned a mention because of its style. My initial objective was to dissect the use of style in Sonnie’s Edge and contrast that with the approach in The Witness.

Except that The Witness does not use the style of its art and animation as a crutch. Rather, it is a tool that accentuates a great story. The Witness boggles the mind. I just watched it again and my mind is boggled. The content is mature. The nudity in this 12-minute short manifests somewhere in the middle.

The scene in question is quite sensual. So, once again, though animated, I would not show this to your children if I were you. As with every episode in Love, Death, and Robots, The Witness is a standalone.

The genre is science fiction, and the concept is so clever that I won’t even bother broaching it here. You are better off watching the episode yourself and smiling at the revelation in the final seconds.

But I don’t have to talk about the story to gush about this episode. Remember Into the Spider-verse? Remember how everyone called the art and animation in that movie revolutionary?

Trust me when I tell you that the art and animation in The Witness makes Into the Spider-verse look like child’s play. The first scene of this episode will trick you into thinking you are watching live-action characters interacting with the real world. But once the action starts, everything changes.

The textures become a little more rubbery but in a great way. And suddenly, the episode throws you into what feels like a live-action painting amalgamated with an animated comic-book.

I don’t know if any of that makes sense. The colours literally pop off the screen. Every sound is visually represented. The style of the animation is working so hard to translate the bizarre nature of this world and it succeeds on every level.

I have never seen art and animation like this. Let me say this. The story is intriguing. But on its own, it honestly is not that memorable. It takes the art and animation in this episode to make the story pop.

In a way, The Witness is not meant to be enjoyed; not like a conventional episode. It is meant to be watched and admired like an art piece. This is the future of animation.