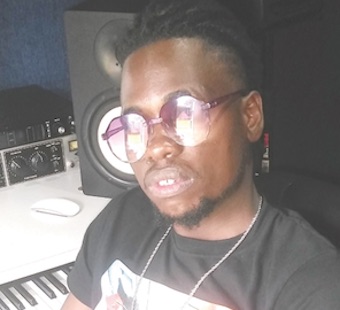 The 6ft 5in tall rapper sports neat dreadlocks and is working on a new song when Quick Talk finds him at Striker Entertainment studios in Bbunga.

Hi…you are very tall! How tall are you?

Wow, you make me look like a dwarf! [And Quick Talk is not a short man…]

Yeah! From today, those you intimidate with your height, go tell them there are taller people than you.

[Laughing more heartily] You know Ugandans love partying. I think that’s why it became a hit song. [After the just-concluded Nyege Nyege arts festival, the hip hip song took on a life of its own.]

But more seriously, I was in the studio making a song when I came across a 2011 video clip where Pastor Martin Sempa was complaining about how Ugandan youth like to [“party after party…!”] I got it and that’s how I turned it into a song. [The poor pastor…his complaint just accelerated the party, then?]

I added a lot of things. It sounds easy but it took a lot of time and resources [Quick Talk asks for an a cappella sample and Big Trill indulges him; dude is really good.]

Parte After Parte is not the only song I have and possibly not the last. We have a lot of music in Uganda, but most of the time we don’t have anthems ….children are singing ‘parte after parte after parte’… adults are singing it; the song is everywhere.

I have heard them…

By the way, this was the official Nyege Nyege festival anthem. I had a performance in Jinja and people showed me lots of positive energy. I have been in the studio for the past one and half years. I have been alone and by myself.

What are the other songs?

I have Bad Gyal Ting, Wangi, Batuwulira ft. Fille, Pretty Colours, Goddem ft. Beenie Gunter, and Awo, among many others.

Impressive. Are you even classified as ‘upcoming’ still?

I don’t grade myself and I’m just label-less. My brand is big Big Trill. [Quick Talk believes Big Trill’s brand should be Parte After Parte…]

Man, your English is thorough! [He is very fluent and speaks with some accent.]

Really? I read a lot. I went to Turkish Light Academy for six years and my mother tongue was prohibited; so, I did six years of English.

How did you start out?

I started with battle rapping. This is what we called underground rap; we were always at Makerere University, Club Rouge and Nana hostel. It was during one of those rap sessions that I hooked up with GNL Zamba [GNL popularized LugaFlo before relocating to the USA], who signed me to Baboon Forest Entertainment.

I was there for three years, then moved to XFM and now here I am, doing music.

Yeah, I have three. I have the eagle, mantra, and star for King David. Eagles fly alone in the clouds, the mantra signifies knowledge and King David defeated Goliath. He inspires me to take on challenges.

Hahaha… Surprise! Now let’s talk about love; are you married?

What? All these ladies plus your status?

To all the ladies out there in the market, I am single and searching.

Haa! What a big lie!

Ok, it’s tricky especially in our line of duty as musicians; people don’t understand us and always take us to be cheats who can’t be with one woman. Now I’m trying to concentrate on my music.

Can you date a musician?

Ooh no, I can’t tell you [After Quick Talk pushes:] Preferably Lydia Jazmine [laughs]. I’m just kidding! [He has declared in past interviews that Lydia Jazmine is the sexiest musician in Uganda…]

She is beautiful, though. Any marriage plans?

Yes, once I find the love of my life at some point.

You are quite chiseled; do you work out?

Yeah! But I have not been working out for the last month. I used to have six packs, now I have four packs [Be humble...some of us have one-packs].

Do you know how to cook?

Yes, I cook for myself. I can cook all local foods. By the way, it was last year that I learnt. I used YouTube and ‘Auntie Google’ [Bursts into loud laughter.]

Where do you buy your clothes?

I shop from anywhere so long as something is good, but I also buy online.

Which perfume do you wear?

[Shakes his head in disbelief…yes…Quick Talk rolls like that!] Seriously? Anyway, I do Hugo Boss and another one [scratches the head] It is called Burberry. I like it. If a girl says you smell nice, you are in the quarterfinals.

True that. How many pairs of shoes do you own?

[Does mental math, fails and counts his fingers] Aah what a question! Are you going to publish that? [You bet!] Twenty-five. I’m a rapper, but I think I have more…about 50 pairs. I’m not trying to brag. I also have many jackets.

What is your favourite beer?

I can’t mention brands, but I can say a strong, cold beer…and don’t ask for my favourite bar.

Okay! If there was one thing you could change about your life…

I am what I am, and I thank God for that.

The rapper, producer, composer, songwriter and piano player was born in 1990.

He was raised by a single mother, Esther Nankinga, and has three siblings.

He attended Turkish Light Academy for his O and A-level before joining Makerere University for a bachelor’s degree in Journalism and Mass Communication, only to drop out after a year.

Big Trill says he did not drop out for lack of tuition, but he wanted to pursue his passion – music.