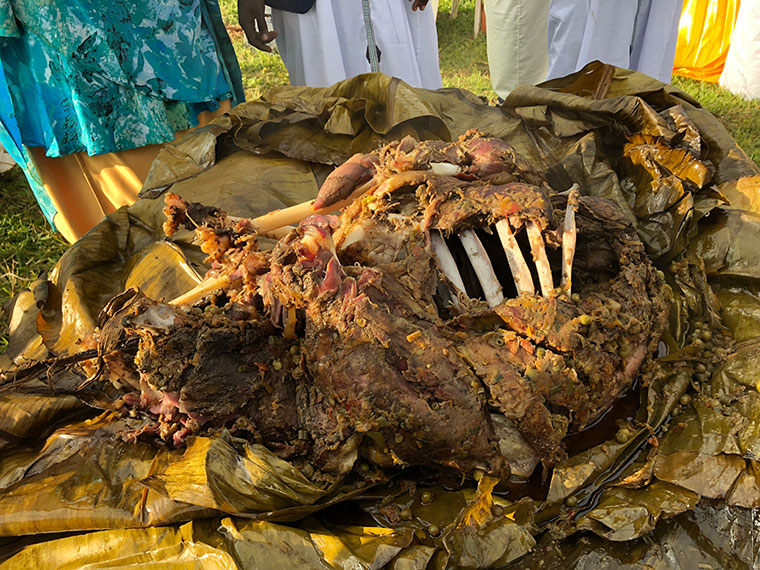 The billowing steam could not freely allow one to behold the spectacle.

But the searing aroma announced to all of us, the in-laws, that it was a goat meat luwombo. But unlike the usual individual luwombo that serves one, this was a whole goat luwombo.

For the uninitiated, luwombo is a Kiganda style of cooking by steaming food especially stews incuding chicken, meat and fish, wrapped in layers of smoked banana leaves/shoots. Yes, I have seen whole chicken and turkey luwombo before, but never a whole goat luwombo. It is even unimaginable, given the size of the goat, yet these chefs pulled it off.

That is how The Observer photographer Nicholas Bamulanzeki’s in-laws in Kyenjojo decided to treat their guests at last weekend’s introduction ceremony. The smoked goat had been stuffed with Irish potatoes and some sauced and blanched ingredients and vegetables that included French beans, carrots, and fresh cowpeas.

Combine all those aromas with the natural goat meat aroma, all kept intact by the banana leaves. Like all luwombo dishes, the meat was tender soft, easily tearing away from the bones and ribs.

The luwombo was served with matoke, white rice, chapatti, pilau, yams and Irish potatoes, but it went so well with the traditionally baked millet bread (kalo) – eaten the traditional way by tearing away the meat and wrapping a ball of kalo around it and munching away slowly – soaking in as much luwombo juice as possible.

It was almost meditation every time the meat-kalo ball hit my tastebuds. There was of course chicken luwombo, as well as groundnut paste and beef stew, but that whole goat luwombo stole the entire show.

Looks like some road-kills. Culinary art should be artistic and more decrativie to attract customers.

Same old ways/traditional does not work these days. Too dry/over cocked.
Report to administrator