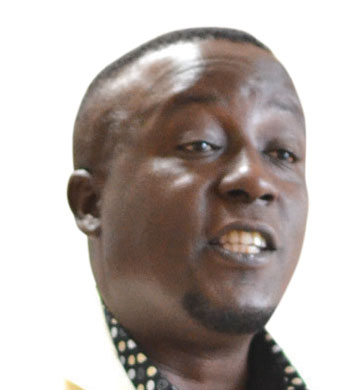 Joseph Kabuleta, a former scribe in his forties, is also the founder of Watchman Ministries with strong allegiance to flamboyant prophet Elvis Mbonye. While many know Kabuleta as the man who kissed Mbonye’s shoes, others now know him for his lengthy, mostly-political Facebook posts that even got him briefly arrested in July.

Quick Talk sat down with the preacher recently.

You are limping. Is it from the arrest?

I see; so, what is your favourite workout?

I run [on a treadmill]. I would be doing it on the road but I don’t have time running around.

Journalists-cum-evangelist! Do you miss the newsroom?

[Brightens up:] Oh yeah. I do miss the newsroom, but I do informal writing on Facebook… [Kabuleta’s Weekly Rants on his Facebook page are what got him recently arrested for allegedly insulting the president.] I practised journalism and that was a calling; I didn’t have formal journalism training, but later I got it. Like journalism, the Gospel was also a calling.

Kissing [Prophet Elvis] Mbonye’s shoes… You received quite a bashing on social media!

[More serious:] Those bashings are nothing. I don’t concern myself with what people say about me.

Would you do it again?

Okay…By the way, what is your beef with government?

Ugandans have settled for fleeting comfort like cars, houses… ignoring important things like not sharing resources, corruption and tribalism, among others.

So that’s the beef?

[Looking disgusted and raising his voice:] The government is stealing all resources in the country; talk about oil, gold… to grow coffee one will need permission… all these are happening and people are quiet! I’m a citizen and I see where it’s going and that’s my concern.

They told you to back off the first son, Muhoozi Kainerugaba. Have you?

I will write anything I want and nobody in government will stop me. He is the one making the T-shirts…

…Huuuuu, okay boss; let’s slow down a bit. The Bugingo issue. What is your take?

[Again throwing his hands up in agitation:] I have no take on it; what happens in Bugingo’s life is his business. It is sad that even our parliamentarians are reduced to discuss useless issues. People are looking for where their opinions will be felt, but since they have not been felt in issues that matter, they have stooped too low in order to be felt.

That theory makes sense. Now, apart from preaching, what do you do?

That’s that. That is the only thing I do.

You look sharp, preacher; which salon do you go to?

Any; I don’t have a specific one and even the gym, I keep changing.

What takes the biggest space of your wardrobe?

Suits, because of the preaching, but also I have casual clothes. I have many of them.

How many pairs of shoes do you own?

[Thinks hard] I don’t know [Quick Talk pushes the point] I have like 10 pairs… they are not few. I keep giving out and buying others. Even the suits.

What kind of man are you?

I’m a man who believes in my conscience. If it tells me to do something, I will do it.

And what kind of father are you?

I don’t know; you have to go and ask my children.

If there was one thing you could change about your life…

God made me in His image and He makes no mistakes.

Kabuleta, what kind of child were you?

I was opinionated and very inquisitive.

I was never stubborn. I was never [expelled] from school and I was not an introvert.

Now that you are a preacher, did you drop the love for sports? [He was a sports writer at New Vision].

Which football teams do you support?

How do you balance preaching the gospel and family?

It’s like any other business; I preach on Fridays and Sundays, meeting other people in the week… crusades are mostly on the weekend.

I don’t cook. I’m not a good cook. It’s like me trying to play a piano; I don’t know how. I believe in division of labour.

When did you last cry, Kabuleta?

When I lost my cousin 10 years ago. He was very close to me.

Sorry about that. What book are you reading?

I read novels to improve my writings. I like reading books by Khaled Hosseini [The Afghan writer behind The Kite Runner, A Thousand Splendid Suns, And The Mountains Echoed, among other titles] I also read the Bible. Right now I’m reading Confessions of an Economic Hitman.