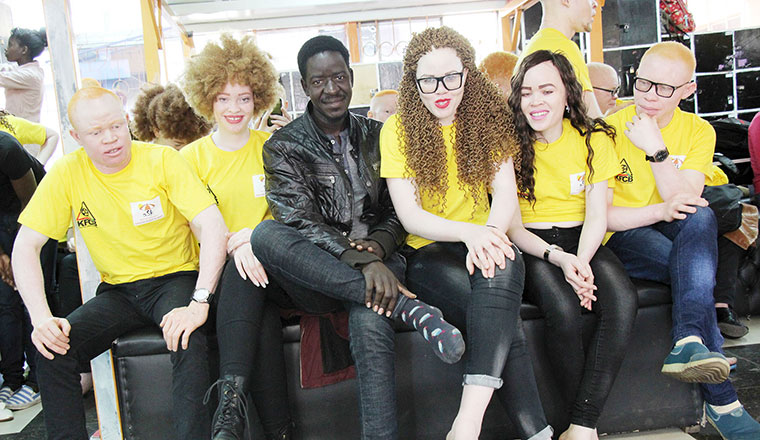 Larubi (C) has created a bond with the albinos

JUTSTUS LYATUU Two years ago, Pat Robert Larubi joined Buganda-owned BBS television to start another journalism career. He was assigned to do ordinary reporting but succeeded in pitching a story idea on covering nodding disease in Northern Uganda.

This turned into a special project for the television. During the research, Larubi found that there was another marginalized group; persons living with albinism with children heavily affected. The children were deprived of education while others were kept indoors.

“The cases were not only bad in the North, but even around Kamuli district; many cases of mistreatment of people living with albinism had been reported,” Larubi says.

“For instance, there was a case where a father was killed by a neighbour also witchdoctor for protecting and failure to give in her daughter living with albinism for sacrifice.”

He cited concoctions from communities that when one has sexual contact with an albino, they can be cured ailments such as HIV/Aids and also believe they have good luck especially when one is doing business.

It was during the International Day for Albinism 2018 that he decided to highlight the plight of the people living with albinism.

“It all started with Albinism Awareness Day, working with Source of the Nile Union of Persons with Albinism (SNUPA) that I decided to start sharing the plight of albinos,” he said.

He thought that with his media background, he would use the platform to create awareness. This was through what he came to call ‘share your light’ slogan aimed at telling positive stories about albinos.

“I embarked on media albinism project to share the plight of albinism... through the lens, I looked for successful albino people like Dr Galiwango of Mengo hospital; these could help inspire parents with albino children to take them to school,” he said.

With the SNUPA partnership, Larubi was able to provide sunscreen creams, taking albinos to hospital whenever they fell sick, providing head gears and sunglasses. As time went on, Larubi found it more taxing than he thought; it reached a point where he could not balance office work and advocacy.

“I had to quit my job [at BBSTV]in order to concentrate on the advocacy work of educating the public on albinos. I wanted to create a platform that would help the population recognise albinos,” he said. Larubi was a features reporter at Buganda Broadcasting Service (BBS) and also a freelance photographer.

For the first time, Uganda participated in the Mr and Miss Albinism East Africa. Larubi said the gospel was to be spread beyond the borders of Uganda and that’s why he ensured that albinos in Uganda are exposed.

“We decided to go for the Mr and Miss Albinism East Africa in order to break the myth...we wanted to tell the world that living with albinism cannot stop one from achieving their dream; this year, he said. Larubi added: “The organizers asked Uganda, Kenya and Tanzania to send representatives and I led the team of 10; five boys, five girls, and we were flagged off by deputy speaker Jacob Oulanyah.”

As we speak, Uganda has the first-ever winner at the Mr Albinism; Paul Wakibona, a Kyambogo University graduate. After the contests, Larubi still needed something to keep the re-burning. He started the Pats Journal; an Albinism News Network which is funded by SNUPA. Pats Journal is an independent investigative, special features TV news producer, lifestyle and documentary travel photographer, blogger and award-winning disability rights activist.

“I collect different stories on albinism and publish them online, we believe this will help the public understand that albinism is simply lack of black skin colour but they are just human beings like us,” he said.

“We lost three people to cancer; one, it was cancer of the throat; brain cancer; we also have a man battling brain cancer which started from the eye,” he said. Larubi added: “This is a person without money; doctors want up to Shs 400m...there is no hope he is just on palliative care.” The activists say such incidents cause him heartbreak; “We can only do advocacy but we can’t o er much ...I have seen them, I know where they are but I can’t o er much.”

“We are moving towards strengthening our operations and be able to continue shining light on albinism in and across Africa. However, we cannot do this alone and hereby invite government through its line ministry, international agencies, the corporate world, religious bodies, individuals and friends passionate about issues of humanity to join us in the push for an inclusive world for all,” he said.

Pat Robert Larubi is a first born in a family of seven. He holds a diploma in Journalism and Mass Communication from United Media Consultants and Trainers (UMCAT) where he was also retained as staff.

He holds a Certificate in Education and a Bachelor of Business Computing from Makerere University. He is a travel photographer who has worked with NTV, Daily Monitor and human rights defender for disability inclusions.