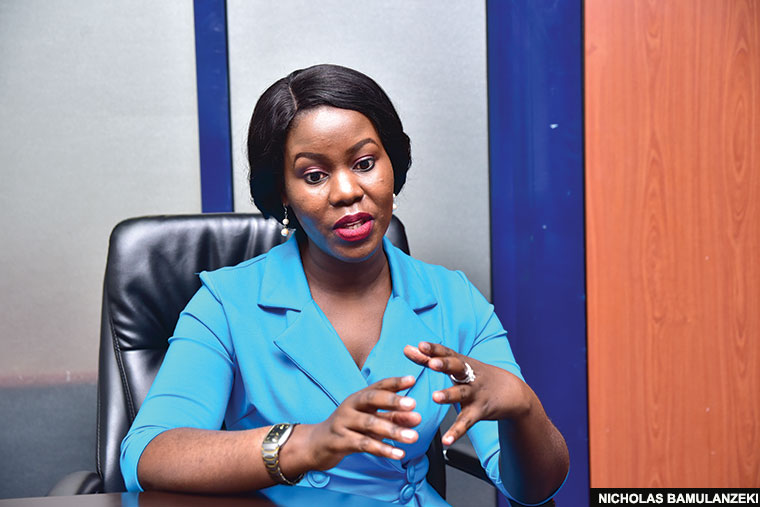 Faridah Nakazibwe was introduced to Ugandans when she hit the airwaves as the beautiful newscaster on ‘NTV Akawungeezi’, the station’s Luganda bulletin. She went on to ‘become the news’ when she was caught between the acrimonious divorce of Moses Kigongo and his wife, Olive Kigongo.

Faridah left that relationship on not so amicable terms with the NRM national vice chairman and shortly after married Dr Omar Ssali in Dubai. Quick Talk sat down this week with the Mwasuze Mutya presenter.

Ssenyonjo! Why not your husband’s surname?

[Laughs] It is safer using the father’s name; if you use your husband’s name, what happens when you divorce or he dies? As a Muslim I can remarry after a divorce or death of a husband; so, when I put a husband’s name, it will be confusing people. [Wow. Talk about ‘thinking outside the box’!]

Apart from NTV, what else do you do?

I do business. I have ambassadorial roles, I do brand endorsements and I’m a mum… that is the biggest role.

You only read Luganda news despite your flawless English…

I believe in concentrating in one place. Luganda is my mother tongue. I came to NTV as a Luganda news anchor and I’m okay with that.

I can express myself in Luganda and this is a big opportunity to promote Luganda; people understand Luganda better than English. [If you have heard Faridah speak English, then you too agree she would make an amazing English newscaster.]

By the way, where did the concept of Mwasuze Mutya come from?

I visited Sembabule and realized people were not happy. People were ignorant of many things in society because of illiteracy; basic things…they were suffering because they did not know who to talk to; so, I came up with a program to address topical issues.

On your Facebook fans page, you have such a conservative approach to love and marriage. [She advocates submission, for example, and a host of other views not popular with modern women like her.]

[Laughs] It’s because there is no ‘modernity’ in marriage! Our population is rigid in marriage, even the educated still [consult] jajjas (grandparents). Our women are getting out of their comfort zone… these days men don’t want to know about family; so, women are coming to take care of children. I write like that because you never know when the man will be there.

And what is your experience?

I may not have gone through that experience, but I hear it a lot. I started love when I  was an adult. I had my first boyfriend when I was going to university; this is compared to today where even a P5 girl has a boyfriend….so, it is good to advise as early as possible.

Do you receive backlash?

[Looking more serious] Of course! The comments say a lot, but it’s understandable. Our grannies did not have a choice. Men get the word submission wrongly. Now, I Faridah have a good job, I can rent or build, I’ve travelled. A man cannot stand and order me around. I will have to ask a few questions. Kneeling does not mean submission.

Is it true that you separated from your husband?

[Looks shocked, then laughs] I’m not aware and I’m hearing that from you for the first time!

Oh, good. Are you comfortable with being first wife and then Hajj adds three others as your religion permits?

Religion says so, but every woman is jealous at some point. I grew up with one father and mother; I think it would be surprising if I found myself in a polygamous family.

Sometimes it happens because there are more women than men. Personally, I don’t advocate a man having many wives.

This Senga Hamida, does she advise you at a personal level?

[Hamida is a regular on Mwasuze Mutya and an advocate of polygamy and a slew of strange marriage doctrines.]

She has her own reasons; she seems to have had her experience.

So, where do you come from?

Masaka. Masaka. Masaka! Although I was born and grew up in Sembabule, then we shifted to Masaka. I studied in Masaka, Taibah School for all my secondary school education and Islamic University in Uganda (IUIU) Mbale. A proud Munnabuddu, I see! Now, more women are marrying and having children after 40!

Marriage is a fuss! They have heard about sad stories in marriage. Marriage is supposed to be heaven, but people are crying that they are seated on thorns.

In today’s world, the girl is getting scholarships, parents are sponsoring them to further education so why the rush to marry yet people in marriage are crying? Things have changed and women have priorities. Women are becoming CEOs, presidents, leaders…. All these are keeping them out of marriage.

Cool. So, where is your dream destination?

[Brightens] Maldives! I see pictures. I want to be in the pools that I see in the pictures.

I like our local music. I don’t know the genre, but local music. Oh! It also depends on my mood and time. I have lost touch of foreign artistes. [Quick Talk can almost imagine her swaying along to Rema and B2C’s Gutujja…]

Hmmm, age is catching up with you! How old are you?

What are you reading currently?

When are you going to Mecca, Faridah?

Oooh! Talk about it! My husband and I were discussing it and we decided to do Umrah first. [Laughing heartily:] I’m not sure I’m ready [for the main Hajj]. I want to go when I clock the 40s. [Quick Talk has been told going on Hajj means a complete lifestyle change going forward, and not many young Muslims want to give up some things yet…Faridah inclusive, apparently.]

You fear losing freedom to wear your jeans and shorts?

[Laughs] There are a lot of things that take place. This is a strong pillar in Islam and you have to change. If you go there and come back and sin, you will be a serious sinner. I want it when I’m contented. I want it in my retirement when I don’t have to spoil it.

That scandal with Hajji Moses Kigongo; how did it shape you?

[Turning gloomy and serious] I don’t want to talk about it. He has a family and I have one. What happened, happened, and that was it. I don’t speak to him. It was sorted out amicably and everybody moved on. I respect him and his family.

OK. But what did you learn from it?

I learnt to make decisions that are well- thought-out. I didn’t have experience in love as a child and this has come to follow me into adulthood.

Aaand…Justine Nameere? [The two women have been beefing openly for some time now]

I don’t care. She stalked me for two years in my inbox and I exposed her. People thought we were fighting for a man. I even told my man about it and after the exposure that was the end.

[Quick Talk thanks her for her time and takes his leave.]

Respect yourself and men will take you seriously. Don't look for love; it will always find you if you're patient. It all depends on the upbring by your parents.
Report to administrator