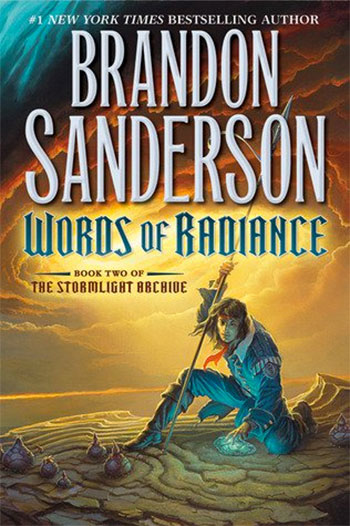 “You sent him to the sky to die, assassin,” Kaladin said, stormlight puffing from his lips, “but the sky and the winds are mind. I claim them, as I now claim your life.”

That line still gives me chills. This whole novel gives me chills. Way of Kings, the first Stormlight Archive book, introduced us to Roshar, a world of stone and storms, in which an ancient Order of Knights betrayed their oath and abandoned the land to the mercy of an ancient evil.

Way of Kings was primarily concerned with laying the foundation of the story, exploring the caste system which elevated some individuals whilst discarding others; the power struggle between the church and the state; and the age-old conflict between gods that was finally spilling into the mortal realm.

Brandon Sanderson’s Words of Radiance takes all that setup and finally pays it off by uniting the disparate purposes of its heroes. Kaladin’s exploits as a war hero ended in failure and incarceration. But he overcame the weight of his caste, proved his courage and saved the life of Roshar’s most famous soldier.

Now he has been redeemed and remade, charged with protecting the King himself. But what should have been a boon is quickly becoming a chain. Kaladin doesn’t belong and the upper crust of Alethi society won’t let him forget. His bond with the honorspren Syl grants him remarkable gifts. But his determination to do the right thing is repeatedly tested by immovable obstacles. And if he fails, Kaladin will lose everything he holds dear.

Words of Radiance is a masterpiece. First of all, it is way too big. We are talking about a volume with over a thousand pages. And yet, every single page of this novel matters. The interpersonal drama is the best it has ever been. Initially the least interesting of the cast, Shallan actually grows to become the most important. Her teacher told her to fake it till she made it.

And she does just that here, growing bold in her illusions, learning to command the hearts of men, struggling to make sense of her feelings for Adolin even as the consequences of her lies catch up to her.

Words of Radiance was marketed as ‘Shallan’s book’, and it definitely delivers in that aspect. Yet, even with all the attention Shallan gets, Kaladin is still the star. Just thinking about one particular scene between Kaladin, Moash, and the King fills me with unimaginable thrill. When Kaladin is on screen, you want to cheer, to punch the air, to scream, and I think I did all three on more than one occasion.

Words of Radiance is that good. The mythology grows even richer, revealing the secrets of the Heralds, the nature of Dalinar’s connection to the Stormfather, the turmoil wracking the Assassin in White, the truths driving the Parshendi to essentially throw their lives away in a war they started but stand absolutely no chance of winning…

I’m in awe of this book.