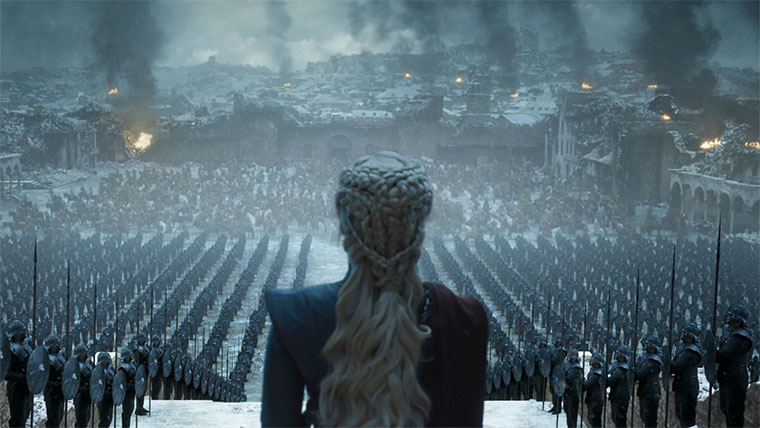 Now that we have all probably watched the series finale of Game of Thrones, this is as good a time as any to talk about Season Eight as a whole.

Game of Thrones began to struggle when it caught up to the books and the show runners were tasked with carrying the show forward on their own, without the detailed blueprint George R.R. Martin’s books initially provided.

For the sake of clarity, the Game of Thrones books end with the death of Jon Snow. So, everything that comes after in the TV show is the work of the show runners. Everything that happened in the final season makes some sense. However, the execution was garbage.

I thought Season Eight was horribly flawed. The first two episodes were mostly set up, and that made them infuriatingly slow. And yet it could be argued that those were the best episodes of the season because they focused on the characters.

George R.R. Martin has always been a character-based writer. The show runners, on the other hand, are so plot-focused that they care very little for the rationale guiding the actions of their characters.

I appreciate the time Season 8 took to bring all its players together. And the four episodes that followed were supposed to pay off that setup. But all they did was provide spectacle with little to no substance.

The show runners turned Jon Snow into the weakest character in the series, and his simpering indecisiveness made this final season difficult to watch, not to mention the overwhelming stupidity that drove him.

Dany was probably the most underserved of the primary protagonists. Her transformation from righteous but merciless hero to unstable villain might have made a little more sense if her arc had been better crafted.

We needed another season, at least, to watch her unravel as everything was taken from her and she was forced to surrender to the Targaryen rage boiling in her blood. People argue that Dany had the blood of thousands on her hands before she ever came to Kings Landing.

But you cannot compare the slaughter of slavers to the murder of innocent men, women, and children. Tyrion is the smartest person in Westeros and yet season 8 reduced him to a bumbling fool. Dany and Jon’s relationship had such a poor foundation, to begin with. And this season did nothing to strengthen it.

So there was no real emotion to that final scene when he took her life. I won’t even bring Bran into this conversation because that twist was dumb. So many plot threads went unexplored.

Why make Cersei pregnant when that particular element wasn’t even going to factor into the finale? And what was the point of taking Jaime through such a winding and twisting arc in his development only to drop him back where he began?

And which of us actually believes that Arya’s arc would rationally end with her sailing off to some unknown land?  The Arya I know would have become the Sword of the North, standing as Sansa’s guard. The show runners did not earn that ending for her; they did not earn anything in Season 8.

And no one forced them to condense the final stages of this story! HBO offered them more seasons but they turned them down. So they chose this, and that makes their failure even worse.