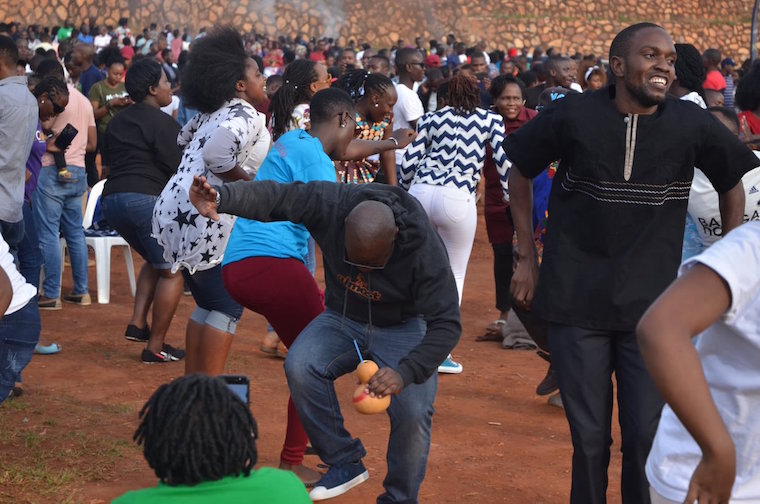 Some of the revellers dancing

Blessed to land on a weekend that had Martyrs day on Monday and Idd celebrations following hotly on its heels, Bakiga Nation that happened on Saturday at UMA show grounds was a fun-filled success.

According to Owen Bigombe, the founder of Bakiga Nation, it was a celebration of culture, togetherness, solidarity by Banyakigezi and their friends through the arts and trade, among others.

With nimbus clouds putting the entire Kampala on rainfall alert the entire day, the day started off on a low key, but in the evening the grounds were packed full of Bakiga, their associates and kin.

It was a family experience where meat and brew flowed smoothly. There were performances from Shine Omukiga, Tamba and more, much to the delight of the crowd that felt as close to Kigezi on the day, as is possible from hundreds of miles away.

Bakiga Nation has over the years grown into one of the most celebrated cultural events in the entertainment calendar and is now on its seventh edition.

“Every year, Bakiga Nation, under the Rukundo Egumeho CSR program, takes on a project to create a difference in our society. The Buyanja project inaugurates the literacy and culture initiative to furnish and renovate the family-owned Buhandagazi primary school to elevate its status to a standard education facility,” said Bigombe.

“This year’s theme is ‘Uganda for Bunyonyi kids’ which is a charity drive aimed at fundraising life jackets and a mechanized boat for young school-going children who find it hard to cross the lake everyday, going for studies. We shall have a lot of activities for our attendees, of whom the majority are people from Kigezi region that reside in Kampala.”

For the Bunyonyi kids, it is quite normal for the children to carry to school – in addition to their school supplies – an oar for the journey to and fro. There are no luxuries of dozing off as a parent navigates traffic back home.

Excited fans asked organisers to get a bigger venue for them, such as Namboole stadium, and increase the cover charge from Shs 10,000 to Shs 20,000 to limit the thieves coming to the event.

Still, there was no stopping the jumping and foot-stomping just like it is done in the hills of Kabale and beyond, as the little ones ran around, oblivious of the wet grounds.

The funny thing is, once Buganda starts it's own Buganda get together, the regime and haters will attack. Buganda, organise, we will come.
Report to administrator
0 #2 kabayekka 2019-06-11 14:03
Indeed these are beautiful mountainous African peoples who are getting used to living on the plains of Uganda.

And they are finding it worthwhile living and are very happy indeed.
Report to administrator