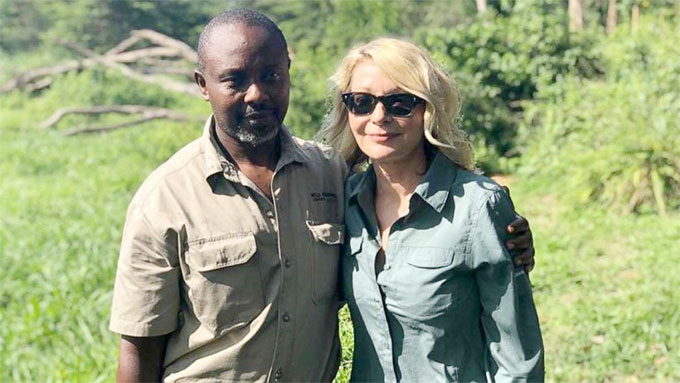 It was Kimberly Sue Endicott’s dream to go on an excursion to see gorillas in their natural habitat.

That dream looked more like a nightmare last week when the California woman and her tour guide were kidnapped in Queen Elizabeth national park, taken by gunmen who later used their hostages’ cell phones to issue ransom demands. But the ordeal ended Sunday when Ugandan security forces rescued Endicott and her Ugandan guide, Jean Paul Mirenge.

They were freed unharmed from the Democratic Republic of the Congo, which borders the Queen Elizabeth national park in Kasese district. Four other people taken at the same time were previously released, officials said.

Endicott is from Orange county and lives in Costa Mesa, working as an aesthetician there. Endicott’s friends told US media that she had been enthusiastic about her trip to Uganda.

One – neighbor Pascale Douglas – said that hearing the news that her friend had been abducted was like a “punch in the gut”.

“She had mentioned when I met her one of her big dreams was to go see the gorillas,” Douglas said.

“At the time she asked me if it was something I would consider doing also, but time went by and she ended up going on her trip.”

Friends were elated at the news of Endicott’s release, said Andrea Glasgow, who worked with Endicott at Platino Salon and Suites.

“Everyone was overjoyed that she was returned safely and that no harm came to her,” Glasgow said. “Everyone was very concerned at our work for her safety.”

Sandy Benton, who said she was formerly Endicott’s hairdresser and has known her for eight years, was “very happy” she was rescued.

“I can’t imagine what she is going through. I hope she is coming home soon,” Benton said. “She has a love for animals. She has always been like that.”

Freddie Medina and Shawn O’Hearn work at an advertising design company a couple doors down from Endicott’s office.

“We are relieved she is safe,” O’Hearn said.

“It’s crazy,” said Medina. “You just don’t think this would happen to someone so close to you.”

Ugandan police said Thursday that an armed gang had kidnapped Endicott and her guide, and made frequent demands for a ransom of $500,000 using their victims’ cell phones. Police had said they would not offer the money. Ugandan security forces eventually rescued Endicott and the guide, although officials released few details about how the rescue unfolded.

“Both were rescued from the Democratic Republic of the Congo and are safely back in Kanungu district in Uganda,” government spokesman Ofwono Opondo said Sunday.

Endicott arrived in the Ugandan capital of Kampala on Monday. Mike Rourke, the manager of Wild Frontiers Uganda, told CNN that Endicott was in the custody of personnel from the US embassy.

Wild Frontiers is the tour company Endicott was with when she and her tour guide were kidnapped. Opondo said the kidnappers fled the scene of the rescue when law enforcement officers and soldiers moved in.

A US defense official told CNN that the US military had provided support to Ugandan security forces. The support included intelligence, surveillance and reconnaissance assets and liaison officers, the official said.

Uganda’s minister for Tourism Ephraim Kamuntu said in a televised address Sunday that authorities had been “under pressure” over the abduction. “We can now put the anxiety to rest,” he added.

Kamuntu praised communities near the park where Endicott was taken, saying: “The media and the communities surrounding the national park were cooperative and sympathetic. They helped the security operatives in rescuing the abducted tourist and driver.”

‘A quiet and peaceful’ handover

A ransom was paid to free Endicott and Mirenge, a source with knowledge of the exchange told CNN on Sunday. The handover was “quiet and peaceful,” the source said.

“We also are working with the investigating authorities to ascertain precisely what happened and how this can be prevented in the future,” the company said.

Wild Frontiers said the identities of the alleged kidnappers have not been revealed.

A CNN report, with slight edits.

0 #1 kabayekka 2019-04-12 15:51
“The media and the communities surrounding the national park were cooperative and sympathetic. They helped the security operatives in rescuing the abducted tourist and driver.”

These are the communities who are lucky enough to be near these incredible wild life. But everyday, they suffer when wild life destroys their crops.

What do they think when they see that this government with the USA have paid so much money to a single kidnap.

So now how much worth are these African wildlife animals to the international community. There is talk about removing these African communities from these expensive wild life national parks.
Report to administrator
0 #2 kabayekka 2019-04-12 16:08
An example of the suffering of these communities living near these expensive African wildlife national parks is of recent. "KASESE - Residents of Kasenyi fishing village at Queen Elizabeth national park are grieving after a leopard attacked and killed a one and a half year-old baby at Kasenyi landing site, Wednesday evening".
Report to administrator
0 #3 Lysol 2019-04-12 22:36
The staged kidnap and humilation of the lady from Costa Mesa, CA has put Uganda in a bad spotlight as it desperately seeks foreign investment in tourism.

Many from aboard will have to think twice before visiting our national parks again
Report to administrator
0 #4 kabayekka 2019-04-15 23:49
"Stray elephants kill expectant mother, injure one near Murchison falls park"

It is high time communities living near these money making national parks acquired guns so that they can defend themselves from the destruction of their lives and property!
Report to administrator