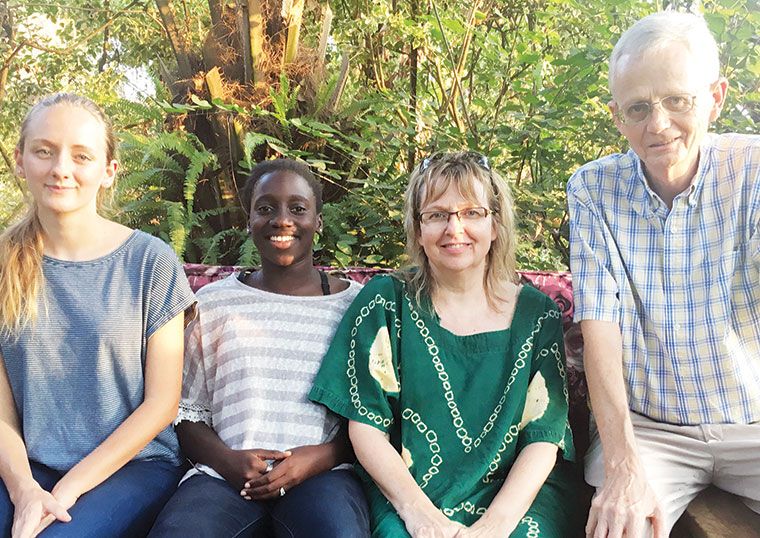 Dr KENNETH ‘KIGOZI’ CHAPMAN is best known as the flawless Luganda-speaking American doctor at Mengo hospital. But beyond his linguistic prowess, he has touched thousands of patients and dreams to widen the dentistry to attract more practitioners, writes Nicholas Bamulanzeki.

At Mengo hospital, Dr ‘Kigozi’ is a celebrity of sorts in his own right. Everyone I met was more than willing to direct me to his office with caution that I will not have to struggle expressing myself.

Indeed, it took just seconds for me to realise the scope of Dr Kigozi’s affability. “Nsanyuse okukulaba…nze Kigozi era neddira Ffumbe [I’m happy to see you…I’m Dr Kigozi and I come from Bushback clan],” he said.

But even before we could go through the nitty gritty of what brought me, he was already being mobbed by colleagues seeking his guidance and consultation. “That’s my routine and I’m hopeful you will bear with me,” he warned.

He is the Mengo hospital head of the dental department. I find him working out the scheduling of dental students from Uganda Christian University (UCU), who last month started the medical and dental school.

“It is promising,” he says, referring to the hospital partnership with UCU. “We are going to have more dental students because they will be doing their clinical training here. So, that is one of the big developments recently.”

Dr Chapman’s plans come with almost four decades of experience in Uganda having arrived here for the first in 1979 while on missionary work with Life ministries.

“It’s [late] Bishop Misusera Bugimbi who brought me here. He was not yet bishop at the time but he was the director of Life ministries at the time. He helped me get settled in many ways, understanding the culture. At the time, the medical director at Mengo was John Davis and was a big help to me. And Zack Kalega, he was the hospital administrator. It was his home that I first stayed,” he says.

After being posted at Mengo hospital, he discovered the task at hand was big because there was no dental school in the country. “I remember there were visiting dentists and at the beginning, it was just myself and one Ugandan lady assistant but as time went on, we added more staff,” he recalls.

In 1982, when Makerere University started the dental school, some of the early students didn’t have necessary facilities.

“They came here to see what dentistry was like in a practical sense and setting. Dr James Magala and Dr Paul Wamala were the first two students. They were only two in the first class. In 1987, they graduated and we began to receive dental interns as part of their internship. They worked with us to get experience. We started like that and slowly kept on growing,” he says.

Dr Chapman admits that when he first came to Uganda, it was a time of great hope.

“I came soon after Idi Amin had been chased out. It was a time when people were saying that now that ‘Amin is gone, we can start rebuilding the country.’

But things didn’t go so well and then there was more instability. Those years, most of the time, there was a lot of insecurity and lots of robberies. You would hear gunfire at night…if you didn’t, you would wonder; amasasi nga sigawulidde leero? [How come there is no shelling today?]. It had become part of life,” he says.

On a personal note, he says Ugandans have always been friendly from the onset.  “Though I’m a mzungu [white], I have never seen any hostility here. I felt welcome and Ugandans generally have accepted me as part of them.”

In terms of dental practice, Chapman says problems here were not so different from those in the US. “The main problems were similar; gum problems, teeth not in line, accidents. Today, we come across a lot of dental problems arising from boda boda accidents.”

Dr Chapman says he learnt Luganda in the course of his dental work.

“What helped me is that most of the people and patients were Luganda-speakers. So, I had many opportunities to practice. I had a language helper called Kato and he taught me how to say the basic things and I would record the way he said it and try to imitate him, as the Baganda say; Akwata empola atuuka wala [Patience pays]. Sigamba nti ntuuse wala naye [I don’t mean I’m fluent but] I’m okay."

"I met a certain missionary lady around 1990 but ndi musajja mukwata empola [I’m a patient man] and so we didn’t get married until 1997. Her name is Lynn Jenny, a trained nurse, and at the time, she was doing community health evangelism in Hoima. We married in Florida in the US,” he says.

“Two years later, we welcomed our first daughter, Briana Nakimuli. I spent about three years in the States. I was taking seminary courses to get more bible training and also to look after my wife. We came back as a family in 2000. Since then, we have adopted Sophia Kirabo Nanteza; so, we have two girls: and Sophia. My wife was given the name Nampijja and she is from the Nte [cow] clan but our daughters, since I’m from Ffumbe, they were given the names by my good friend Simon Peter Kigozi.”

However, Dr Chapman’s work in Uganda has not all been smooth, especially when it comes to equipment.

“One of the biggest challenges is getting supplies and equipment because everything has to be imported. It didn’t help matters that after [September 11, 2001] terror attack, dental companies became selective and what would be seen as anything slightest possible risk, they would say we cannot ship that one. So, trying to offer good services that omuntu wabulijjo zasobola okusasula [ordinary person can afford] is a challenge. So, we try to make it a range of services available. Some can only afford to pull the tooth out. A few can afford complicated surgeries.”

“We realised we need to expand and improve the old clinic which was in the general hospital outpatients. I thought we can maybe add a room. We had a missionary lady who had a whole vision for a fully-fledged department,” he says.

“In 2005, we put up this new 10-chair department in Mengo and we have been trying to develop by adding new technologies, a big development this year is  that UCU has opened a dental and medical school with 10 dental students that began last month.”

On a personal level, Dr Chapman has mentored hundreds of young dentists. “I’ve taught them, not in a classroom setting, but in a clinical setting. We would look at the patient together and I guide him to do the work as I guide him. Over the years, that has been my biggest satisfaction.

Since 1987, more than 300 dental interns have done their practice at Mengo hospital. “And it is not about me, by the way. I’m just one of seven dental surgeons here and all of those people have an input along with other staff. Meanwhile, seeing how this clinic has grown gives me pride and now that we are partnering with the dental school of UCU, this expansion is remarkable.”

“Kisinzira [It depends], if it is a typical day I wake up at around 7am, cup of tea, bible reading, start seeing patients at around 9am. I go to Namirembe cathedral for Bible study fellowship every Monday. It’s not about just patients but also administrative work.

Chapman says the most important thing in his life is his spiritual journey.

“I grew up in a Christian home. My mother was a choir director but in spite of that, I wasn’t sure in belief. Munda nali sikkiriza bulungi [I wasn’t convinced in spirit]. I went to church and read the bible; I would hear people talking about having a personal relationship with Jesus. I didn’t know how to get it but finally when I was in dental school, some people explained to me that I could invite Christ in my life. That was a defining moment in my life. I wanted to share it with the people and one way to do it was to work as a missionary,” he says.

“I like to help people with physical needs; so, I worked as a dentist and the Life ministry opportunity brought me to Uganda. So, as I help physically, I also seized the opportunity to share my faith of Christ. That has been the best thing that ever happened to me.”

Chapman says he likes to play golf in his free time.

“I also enjoy working with patients. I like it when I and other doctors tufumba emitwe [brainstorm] to get the best for the patients,” he says. “Looking forward…honestly, Nkuze [I’m ageing]. Right now, I’m trying to help these young men and women get good training. That’s a big challenge coz it requires space and equipment and a lot of our future focus is on that. Technology is changing the profession and we are always trying to keep up to raise our services and training. When I die, Uganda would be good place to be buried but then the family may say otherwise. We should probably discuss this with my family. Tujjakulaba [We shall see].”