A recent weekend trip to Sipi falls in eastern Uganda showed me the beauty Uganda has to offer; a sight far from anything I would see in my native Denmark. The air was clean and refreshing, and the view nothing but stunning.

The geographical difference between Uganda and Denmark is worth pointing out, for you to understand why I was struck by nature’s serving. Denmark is a small country, just north of Germany, with a very flat landscape.

Sipi lies at an altitude of 1,775m, which is very different from the highest point in Denmark – at 171m. Needless to say, we don’t have any waterfalls.

My five European friends and I (all of us are in Uganda for internship) reached our hostel, Crow’s Nest, on the slopes of Mt Elgon in Mbale at around 9:30am on a Saturday morning. For five of us, it was our first time in Uganda; so, everything was fresh to the eye.

The sun was warm, and we enjoyed our breakfast on the terrace with a view of one of the falls. From our little balcony, we could hear the water rushing from the fall and see the wind in the high green trees in the distance.

For breakfast, we had eggs, toast, and I had a big mug of African tea – black tea boiled with milk, and sugar added to taste (and let me note; the tea is amazing). Our local guide, Patrick, picked us up from the hostel when breakfast was done.

The hike to the three Sipi falls is around four to five hours, but we decided to visit one close by as well, meaning our hike was over six hours. We started with the first waterfall, which was the one we could see from our balcony at the hostel.

A short descent on a muddy path made by locals made it possible to get to the lowest of the three Sipi falls, where the water has a 100m drop. The mist from the water made the surroundings wet and cool. It was refreshing to stand near, especially considering the warm temperatures we had that day.

When we were done, we scaled a makeshift wooden ladder to the top, where we got to take a look at one of the caves, where people have reportedly lived in the past. It was not safe to enter, because it is now a habitat for bats and no one wanted to risk contracting Marburg – a disease similar to Ebola, also spread by bats.

We trekked through small villages, where the people were not too familiar with muzungus. Often, they stopped in their tracks to look at us, and from behind trees and bushes we would hear the kids shouting “Muzungu! How are you?” until we found their hideout in the forest and were able to return their waving.

On a road close to the second waterfall, we had gathered a following of 15 kids, who all wanted to see what these strange-looking people were up to. They scattered fast as soon as one of us jokingly reached for a camera; disappearing behind trees and houses. But of course, we could still hear their laughter.

The second waterfall we visited was visible from a rock plateau. This fall is not part of the three Sipi falls but is located close by. We had our lunch, a rolex, while sitting on the rock in the warm sun, enjoying the view in the distance and the waterfall.

Most of the way to the third waterfall was done on a bigger road, which stole a bit of the scenery we experienced through the forest. The second Sipi fall, known as Simba, is probably the most accessible.

When we arrived, a group of kids were laughing at their teacher, who had placed herself beneath the water and got completely drenched from its fall of 69m. Tourists can enjoy Simba from inside a cave, making it possible to practically stand underneath it. It is cold, the sound of the water loud, and absolutely stunning.

It is dark inside the cave and the trees surround you, making it feel like a private little room. That was a much-needed break before our hike continued upwards in the strong sun.

The hike goes around the waterfall; so, you end up on top of it. It is mesmerizing as the landscape changes into grass and stone, and is no longer just dense forest, offering a great view of the road and towns we just left.

A couple of kids were swimming in a natural pond, which looked like a lot of fun. Of course, we wanted to try it, but when we put our feet in, we decided otherwise. The water was freezing!

Instead, we just sat around trying to cool our feet after four hours of hiking. I don’t know what those kids were made of, playing in the cold water like that!

We rested for a while, before continuing on to the last waterfall of our trip. Just before the waterfall, was a small shop selling drinks. We must have bought all the water in stock, because none of us had carried enough water for a hike like that. 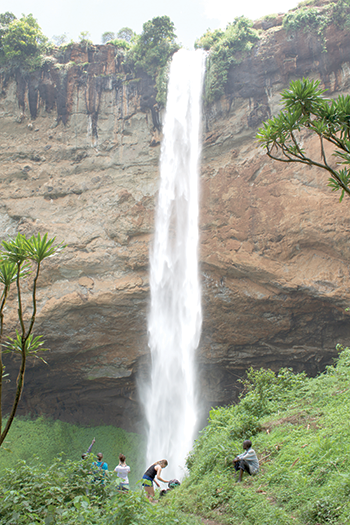 This made the trip to our last waterfall easier, and the view was amazing. It probably has the biggest water volume, even when dropping at just 87m. The name of this one is Ngasire.

The mist from the water reached much of the forest surrounding it, making the trees tall and giving them a dark green colour.

Standing on a slippery rock next to the waterfall, I had a clear view of the rainbow that formed just beneath the falls. Standing there, I could enjoy the sun while being cooled down by the cold mist of water. No wonder the trees clearly liked it so much.

Soon it was time to go back to the hostel. We were exhausted by the hike of almost six hours, even as the wind started to pick up.

Black clouds gathered and chased us, running the rest of the way to the hostel in our muddy hiking shoes. I made it back just in time before the skies opened and heavy rain started.