But as the shouting, heckling and punching ensued in parliament led by an opposition side trying to foil the bill, Zaake distinguished himself as the most active in the fracas.

He did not betray his name, which means ‘let them burn’. He threw books, papers, anything his hands could land on. He joined the impromptu choir singing the first stanza of the national anthem again and again, until Speaker Rebecca Kadaga was so irritated she adjourned the House, but not before noting down the names of the noisemakers.

Hearing of the adjournment, Zaake flung himself onto the clerk’s table, throwing his legs in the air in a show of ‘victory’. Little did he know it would be a long time before he could pull off such a victory dance again.

Zaake’s ‘victory’ was short-lived. The following day when the speaker took her seat, her first communication was to suspend 25 MPs for three sittings for misbehaving.

Zaake was one of them. As soon as the speaker gave her orders, men and women later identified as members of the Special Forces Command, the elite force that protects the president, pounced on the suspended MPs and others in the parliamentary chambers and a fight ensued.

Zaake and friends threw chairs, microphones, jumped onto tables with their attackers in hot pursuit. When nothing was left, Zaake removed his belt and shoes, throwing them at his attackers.

Then Army MP Gen Katumba Wamala stepped in with that decisive punch to Zaake’s face, putting the youthful legislator down and out. He was to spend more than 24 hours in coma, waking up at Lubaga hospital.

The youthful MP says he was the first person to be assaulted on that fateful morning when several soldiers held him to the ground and punched him, away from journalists’ cameras.

“I reported to the speaker and she said I would make a personal statement in the house, but when the time came, she instead just read my name among those suspended. The people who pounced on us in parliament were the same people who had beaten me in the morning. So, when I saw them again in the chambers, I lost my cool,” Zaake says.

That day’s beating almost cost him his life and he had to be flown to the USA for better management. He has since reportedly spent in the excess of Shs 300m of personal money on treatment.

It is from the village that the family picks its name, Butebi. Zaake went to St Mary’s Fairway primary school in Mityana for his primary school. He later joined St Lawrence schools and colleges Kabaka’s Lake campus for secondary school.

For A-level, he joined Maryland High School Entebbe completing in 2012. He then joined Ndejje University to pursue a bachelor’s degree in Procurement and Logistics Management.

In joining Mityana Modern, a day school, what was on Zaake’s teenage mind was to venture into the world of business. This was not going to be hard, seeing as both his parents were accomplished businesspeople both in Kampala and Mityana.

“My parents are businesspeople involved in all sorts of businesses; general merchandise, microfinance, forex bureaus and real estate, among others,” Zaake says in an interview.

Unlike many youths, Zaake’s start-off was not shabby at all. On top of being a director in all his family’s businesses, his savings account, one of those opened for every child born to his parents, already had Shs 105m.

“As soon as you’re born, a savings account is opened for you and that money is not touched until you come of age,” Zaake tells me.

In the third term holiday of S2, Zaake consulted his parents who agreed that he channels his savings into business. He decided to open a general merchandise wholesale shop in Mityana. He employed his cousins and aunties to manage it for him.

His business performed so well that by the time he was in S4, he had bought his first car, a Toyota Landcruiser Prado.

“I would go with my car to school, park it and do my studies then drive back home. It was really fun,” Zaake says.

Asked whether such a lifestyle did not compromise his education, Zaake says he never had time to waste.

“My parents have a way they manage you to be focused on a number of things at the same time. There was no way you could get time to waste. I would be at school only for business. This helped me to have only friends that mattered,” Zaake says.

Zaake says that Maryland High school sharpened his political consciousness. While there, he was elected chairman of all the clubs on top of being president of Nkobazambogo, a club that unites Baganda students.

At Ndejje University, he ran for the office of the guild president and won with a comfortable majority. He says his ability to appeal to students by articulating issues that directly affect them, coupled with his financial muscle endeared him to many. 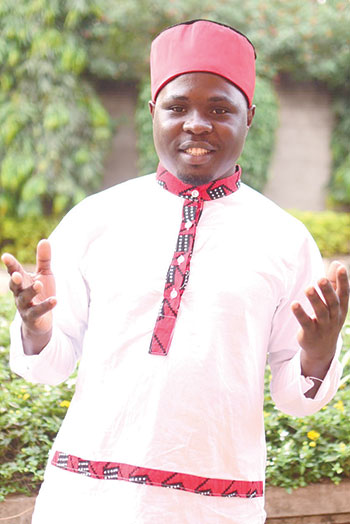 As he campaigned for the guild presidency, Zaake was also laying ground in Mityana municipality which he wanted to redeem after “the disastrous terms” of previous MPs, Jerome Ssozi Kaddu Mukasa and before him Augustine Nshimye Ssebuturo and Besweri Mulondo.

“I looked at my community and it was like we never had an MP. For all the 10 years Kaddu Mukasa was in parliament, we never heard from him, whether in parliament or in the constituency. We needed better representation,” Zaake says.

Zaake was now balancing books with the guild presidency, business and politics.

“It was a huge task to balance all these things but I managed actually to perform in all of them exceptionally well; that’s why even students came to Mityana to campaign for me,” Zaake says.

However, his father was reluctant about his eldest son’s move into politics.

“As a father, he was not happy knowing what is in politics. But as a businessman, he has interest in good governance and actually he was always a big sponsor of politicians,” Zaake says.

But unlike his father, Zaake’s mother straight away gave him the moral and financial support.  She also convinced his father to give him a chance.

“They supported me together with their business friends both in Kampala and Mityana. I can’t lie to you that I ever used even a single coin of money in the campaigns.”

The 26-year-old legislator says he is not officially married but is living with someone he prefers not to name, for she enjoys her privacy. They have a three-year-old son. Zaake says his father rose from being a fisherman on Lake Wamala to becoming the successful businessman he is today.

This background taught him and his children to be humble and respectful to all people despite their backgrounds. However, Zaake says he stops at nothing when defending things dear to him.

Was it even worth the fight? The bill Zaake almost died for was finally passed shortly before MPS broke off for Christmas.

“Fighting a dictatorship isn’t a simple thing. Many of our people tell us that we talk too much and do nothing. Indeed we have done a lot of talking and government has taken us for granted. We have a kind of parliament where most of the MPs who voted yes can’t even reason with us. It is not a parliament you would have a sane argument. So, for me getting physical when my country’s future is on the line is something I will do over and over again, given the opportunity. I’m not scared of death,” Zaake says.

He is only worried about his mother. Watching him being beaten and left for dead took a toll on her health.

“My mother got health complications after seeing me in a lifeless state. Her blood pressure shot up, she now has health issues we can’t explain,” Zaake says. “It’s not that they regret my joining politics, but they say I’m paying a very high price.”

Zaake is flying back to the USA on January 18 for more answers.

“[The doctors] found unusual substances in my body which they could not explain. They were taken to a research center in Minnesota University to find out what exactly they were.”

In the meantime, “I want to see my people’s lives transformed. I have a vision of making Mityana a model constituency. I want to be a person people look up to for inspiration, especially the youth”.

He concurs: “I’m aware they may not be as lucky as I was, having been born in a family that was better off financially, but like my parents’ story, you can start small.”

Zaake is the shadow minister of East African Affairs and sits on the committee of Government Assurances headed by Kampala Central MP Muhammad Nsereko. He is also the director of Zaake Zivuge Foundation, a nongovernmental organization that mobilizes for poverty eradication .