Suspended Makerere University researcher, Dr Stella Nyanzi, never thought about starting Pads for Girls [Pad4girlsug] campaign until she was summoned to police for interrogation over her Facebook posts that have riled many a government official.

Nyanzi has cut herself a following for using graphic language mixed with sexual innuendo to attack President Museveni and his government. Previous attacks were largely ignored until she took on the powerful minister of Education and Sports, Janet Museveni, who for a long time has been shielded from public criticism.

In an interview with The Observer last week, Nyanzi said she started the campaign as a form of vengeance and protest against her “tormentors”.

“I was invited to Kibuli for interrogation after I wrote about the wife of Yoweri Museveni. She went to Parliament and reneged on her husband’s promise to give sanitary pads to poor schoolgirls. I set out for that one time to avenge for myself and many others who believe in the right to speak. I told people; come with pads as I’m interrogated on what I have written,” A jolly Nyanzi said last week. “Did I set out for vengeance? Yes I did. Did I set out to run around the country distributing pads? No.” 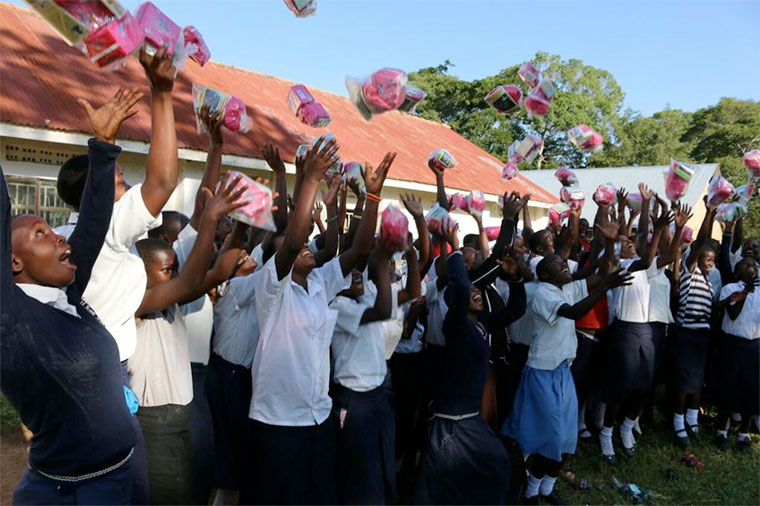 She said the country needs services but the government is too preoccupied with retaining power.

“Ugandans have moved away from, ‘we beg the government to help us’; they say that if the government is impotent, let’s be our own men and impregnate our own women,” Nyanzi said.

“When I’m questioning the actions of [Janet] Kataaha, I’m one person but the actions of everybody who brings a pad in response to my call is challenging the powers that be.  I opened a small door to allow a lot of Ugandans to express what they wanted to express for a long time,” Nyanzi boasted. “Abantu bakoowu. I don’t know how to say it in English because if you say people are tired, it doesn’t translate to the set of apathy or fatigue obtaining in Uganda.”

Although Nyanzi is the face of the campaign, she has a group of more than 40 volunteers with whom she is working. One of those is Almeidah Ampwere who is the spokesperson of the campaign.

“The campaign has been amazing; the response of Ugandans is very humbling. Everyone has pitched in, in some way. A boda boda guy will call you and say, ‘I have sent you Shs 3,000’; that tells you that this affects even the lowest of the low-income earners,” Ampwere said.

She said the campaign has so far managed to reach more than 2,000 girls in less than three weeks.

“Nothing is more amazing than that,” she said as her colleagues cheered.

Dr Sheillah Nyanzi, Stella Nyanzi’s younger sister who also works as the strategy and legal secretary for the group, said the campaign has showed that Ugandans care about their country.

“People think this is about Stella; no, there is a bigger group. People who give their money and their time is indicative of who the real citizens are,” Sheillah said.

Although Stella Nyanzi is largely a thorn in the fresh of government, she said the campaign to give girls pads is run on a non-partisan basis.

“I’m a very sharp-tongued woman; I say what I say often to offend so that people take from what I say to begin to think. As you lay on your bed so offended, you say to yourself, ‘how dare that woman ask that?’” Nyanzi said.

“People have been offended, particularly NRM lovers, normative people, the Christians, the Muslims, conservatives; I thought they wouldn’t respond but I have been surprised because the response cuts across. The people who are in our working group come from all parties.”

She said they chose to take an apolitical stance because poverty knows no political inclinations.

“A man from the US sent us $1,000; that sort of response looks at a large mobilization to people who are looking for solutions,” Nyanzi said.

On the criteria used to select schools and districts to benefit from the campaign, Nyanzi said they have individuals tasked with different roles.

“We wrote on our timeline calling on people to write to us about the schools they knew. We have compiled a database for these schools,” Nyanzi said.

She defended the use of social media mainly accessed by people in urban areas to identify schools in need. She said privileged Ugandans with access to the Internet also have villages they come from and would love to be helped. It is these people, Nyanzi said, who write and invite her team to those schools.

She said they also solicit for the support of area politicians and district education officers who mobilize and identify needy students that cannot afford sanitary pads.

“Our main reason to go through district education officers is that the poorest schools are run by government through the UPE and USE. We thought government will welcome our initiative and it was going to be easy,” Nyanzi said.

Nyanzi dismissed stories on social media that the ministry of education had written to district education officers and head teachers instructing them to deny her access to government schools. She said none of the officials has acknowledged receipt of the said directive.

“No one has written to us to say it is criminal to go in a school with pads. No one has dared stop us; if there is a circular, let them bring it; that is propaganda,” Nyanzi said.

“Are girls going to stop menstruating anytime soon? Is government going to give schoolgirls sanitary pads anytime soon? If any of those happen, then we can end the program,” Ampwere said.

The group said so far they have given out more than one million pads, although their target is 100 million pads by Women’s day next year.

“If Museveni reconsiders his position and gives his wife money to buy our girls pads, then maybe we shall also reconsider,” Nyanzi said. She called upon whoever can assist to come on board.

“I’m still menstruating at 42; maybe when I reach 50, I will stop, but I have a daughter who is menstruating at 12. She can afford [buying pads] but what about other girls of her age? It is us who should help them if the government has refused,” Nyanzi said.

She said while distributing pads they also issue questionnaires to help gauge the level of knowledge concerning menstruation among students.

“I was shocked in Mukono when a girl asked whether she can share a pad with her sister,” Nyanzi said. “The government should think of reviewing the curriculum to take care of the knowledge gaps. At a later stage, we shall engage the policymakers on the results.”

Could you bring some pads to Angagura Sub-County, Burlobo Parish Primary school were the best student got a 25 points last year?

Its in Pader District, along river Achwa.
Report to administrator
+3 #2 Ugthinker 2017-04-11 11:31
Dr Nyanzi should be supported rather than sending her to prison! Sharing is caring.

Kataha Museveni will come out of this more bruised than Stella. Poor strategists or lack of them?
Report to administrator