With the growing comedy competition in the country, one has to give it up to comedian Alex Muhangi for keeping the Comedy Store shows at Diner’s Lounge, in Bukoto, afloat.

The shows happen every Thursday, and last week Muhangi was it again. This time the show started at around 9pm with Party People ‒ a new dance group that is taking concerts by storm. The group, made up of Rastas, has found its way into people’s hearts with their free style dance moves.

They don’t force it with choreographed moves copied from western music videos like the other dance groups in town, instead they just come up with their unique moves.

Kachina is a new comedian who hails from Mbarara. It was his second time performing at Comedy Store and he had the crowd that could understand Rukyankore eating out of his palms, as he does 80 per cent of his jokes in the language. Luckily, most of the crowd could understand him.

Dicanio came on next, and like most comedians, he focuses on X rated jokes, and the audience never seems to tire of them. Creativity has always eluded most of the comedians, both the new and the old, but Jaja Bruce should be given a pat on the back for that. He came on stage with makeup of an old man, with grey beards.

His is about doing one man pre-recorded skits, ranging from funny news stories, to translated movies and hit songs. The creativity just made him stand out.

The audience had a fair number of Rwandans and they cheered when Arthur Nkusi, the comedian from Rwanda, was called onto stage. Nkusi is regarded as the funniest stand up act from Kigali; he is also a former Big Brother Africa housemate. But when he last performed at the just concluded Africa Laughs Comedy show at Serena hotel, he seemed to chock. He couldn’t move the crowd, lacked the energy on stage and the punch lines were ill timed.

This was his time to redeem himself, but alas, he didn’t. Comedians recycle jokes the world over, but it is how the jokes are recycled that matters. Nkusi, having performed in Kampala three times before, is now predictable. He lacked the element of surprise. The only joke to write home about involved pastors and how fake crowds speak in tongues, yet they are just playing around with the alphabets, reading them from different angles.

It was Herbert Segujja, aka Teacher Mpamire, who blew the crowd away. As usual, he came on with his blackboard and hilarious attire. He worked up the crowd, cracking them about buying drinks, then moved on to his politically satirized jokes; from failures in parliament, the education system to the electoral commission. 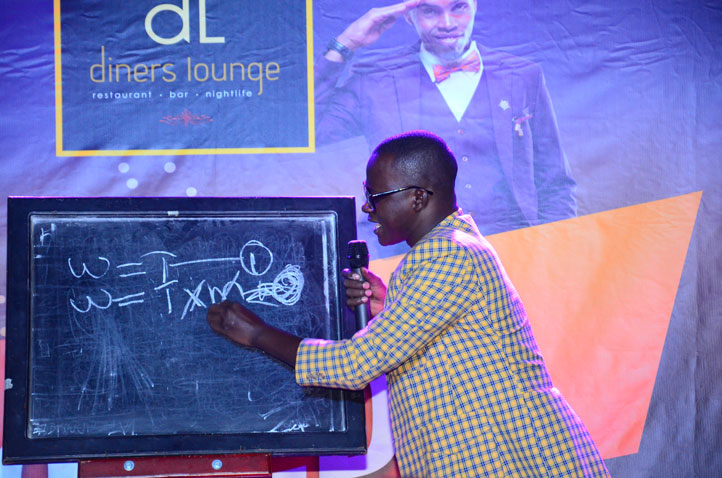 He was requested to mimic President Museveni. He did one joke about how Museveni answers questions and walked off, amid cheers and people asking him for more.

It was singer Lillian Mbabazi’s turn to wow the audience. Clad in black, she started with Dagala with the crowd singing along. She then sung her latest single Yola Omukwano, and then closed with Memories, her duet with Apas. Apas wasn’t present so it was left to Muhangi to fill-in, and he nailed it, singing Apas’s part word for word. The crowd jumped on their feet, cheering on Muhangi.