Nothing prepared me for what I was about to see. After I alighted from the rusty dark blue taxi at a junction along Stretcher road in Ntinda, I followed the only murrum road in the vicinity in search of the Dorna Centre of Autism.

I had been told it is one of Uganda’s two sanctuaries where children with autism are cared for. Autism is a developmental disorder that involves abnormal growth and function of the brain. People with autism show decreased social communication skills and restricted or repetitive patterns of behaviour or interests.

The environment was as silent as a graveyard. However, no sooner had I made my way into the centre than a shrill shout cut through the air. It was of a child running around in circles in one of the rooms.

The centre’s owner, Dorothy Nambi, eager to show me how children with autism live, walked me into the room where many of the children were. My eyes landed on one girl carrying numerous pillows on her head and in her hands. From her behaviour, one could easily notice there was an element of abnormality.

She did not say a word and neither did she need constant reassurance that other children usually demand. She just stood at one end of the room and stared blankly. This was 11-year-old Angel Nalule.

“She doesn’t like mixing with other children and when she had just arrived at the centre, she used to love banging walls and would make a lot of noise. She has a lot of energy and carrying such things calms her down. Nalule also loves to dig holes in the soil with her bare hands,” Nambi said.

As we were still talking, another little girl came over and hugged me. A smile flashed over her face, like sunshine over a flower. But in a flash of a second, she pulled away and went about making different noises, as if trying to say something.

These are some of the children Nambi has committed to giving a comfortable life for the rest of her life. However, had it not been some of her circumstances in the past, her life script would probably be reading different today.

Conceiving during her S4 vacation in 1994 opened a can of challenges for young Nambi then. On one hand, the man responsible for the pregnancy compelled her to perform an abortion and, on the other hand, she wanted to escape from home fearing her parents’ wrath if they found out. But she did neither.

“Although I tried to hide it, time came when my mum detected something was wrong with me and on further investigation, found out I was expecting. Surprisingly, she encouraged me to give birth to the baby, saying I would return to school,” Nambi said, her eyes lighting up.

She was taken to live with an aunt in Luweero district where she delivered a baby boy, Wycliffe Wamala, in 1995. Meanwhile, the father of her son tried to abscond responsibility until the Uganda Association of Women Lawyers (Fida) intervened.

Luckily, in 1997, Nambi was able to enroll for a certificate course in nursery education, which she pursued for two years. Thereafter, she joined Kyambogo University for a certificate course in special- needs education. Asked why she was interested in nursery and special-needs education courses, she said it is because of the way her son’s father treated him.

“He always accused him of being a slow learner and this came along with heavy beating when he found mistakes in his work. Wamala always feared going to his place because of these beatings and when he tried asking him for school fees, he would never part with a penny,” Nambi narrates.

As a single mother, she worked hard to see her son through school and he is now completing his first certificate in bio medical lab technology at St Francis School of Sciences in Lugazi.

Out of her son’s experience, she sought to help other children that are slow learners have a bright future. However, her file of inspiration was just opening.

During her teaching days at Mother Goose Day Care and Nursery in Ntinda, Nambi interacted with a one Kevin afflicted with Down’s Syndrome. He always isolated himself, had not developed speech and was a slow learner. Even the teachers, ignored him, calling him names.

Her colleagues’ behaviour hit her like a ton of bricks and she committed to helping Kevin and similar children from that day on. She has not looked back since.

In 2007, she joined the Komo Centre of Autism in Entebbe as a teacher. Here, Nambi, also a Sunday school teacher, interfaced with yet another disability where afflicted children display an excessive obsession for something. For example, Christopher Komo, after whom the centre is named, has an excessive obsession for water. Nambi learnt new skills on the job and took on the mantle. 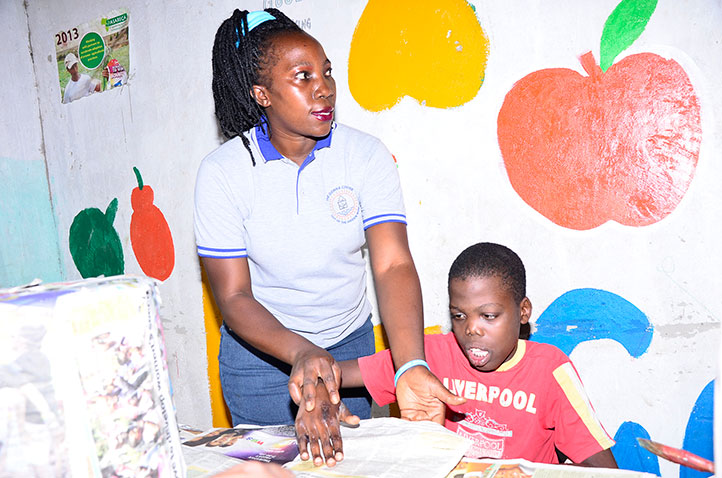 “For five years, I commuted with three autistic children in a taxi from Kampala to Entebbe daily. Some taxi drivers would even refuse me from sitting in their taxis, claiming that ‘my children’ made a lot of noise,” she reminisces.

To save parents who live in Kampala the inconvenience of always having to carry their children to Entebbe, Nambi started Dorna Centre of Autism in 2012. It is located next to the ministry of Gender in Ntinda.

The centre started with five children but currently has 11, aged six to 19 years. For a sense of normalcy, the centre’s six staff engage the children in learning self-help skills such as brushing their teeth and washing clothes, and teach them how to write and shade, among other skills.

When I arrived, some of them were putting glue on shredded paper that they would place on inflated balloons while others were trying to wrap dustbins. Nambi says such activities help these children develop their motor skills.

Despite the great work, challenges of paying rent, staff and specialists such as speech and occupational therapists, remain rife. Nevertheless, Nambi envisions establishing a vocational skills centre for autistic children in the near future.

The cruelest thing about autism is we may never know what causes it. Many times, it is detected late. One parent with an autistic child that The Observer spoke to gave this account:

“My son Emma was okay until he turned two and started having convulsions. Then just before he turned three, I took him to school. However, when the other children came to welcome him on the first day, he started screaming and for the whole term that he was there, he never got used to them. We then took him to Montessori school in Bugolobi but whenever he went, he would throw a tantrum and throw chairs around.

Then one of the parents told the school administration that she would withdraw her children if this boy was not transferred elsewhere. Emma was then taken to Naguru Hill Preparatory School and was there for two years.

However, in the course of the second year, his caretaker left and it affected him immensely that he did not go to school for a month. When we took him back, he threw lots of tantrums and this made me withdraw him from the school. For eight months, he remained home until a friend connected me to the Komo Centre.

Apart from my child being rejected, the biggest problem is how to move with him through life. He doesn’t talk, is epileptic and needs to be observed constantly whether eating or going to the toilet. His understanding is different. For example, if you call him, it will take time to register that he has been called but will eventually come. Handling him takes a lot of patience.”

According to various information sources on autism, early warning signs parents should look out for to determine whether their child may be autistic include: lack of eye contact, a child does not smile back when smiled at, does not respond to cuddling, has no spoken words by 16 months and has no back and forth gestures such as pointing and waving.

Nambi appeals to good Samaritans to reach out and help autistic children and urges government to create more awareness on the condition. For now, she is living her calling through caring for them.