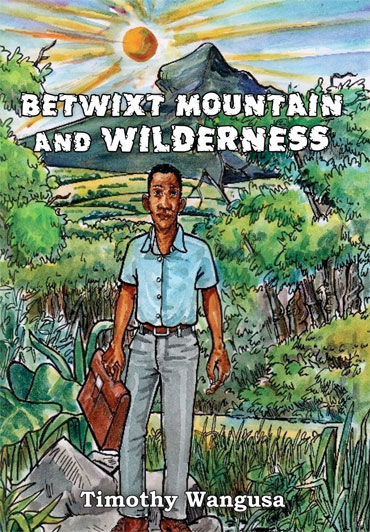 Anybody who has read Prof Timothy Wangusa’s Upon this Mountain (1989) has a number of questions that beg to be answered. For instance, what happens to Mwambu after he has escaped from school upon revealing Reverend Graves’ sexual affair with his (Mwambu’s) girlfriend, Nambozo?

Betwixt Mountain and Wilderness answers such questions and raises new ones.

It starts where Upon this Mountain ends: Mwambu’s adversaries (Wayelo, Kuloba and Wopata) grab him and attempt to circumcise him by force, only to discover that he has already been circumcised in a hospital.

“Circumcise him again!” Wopata shouts in an enraged voice, but an elder called Mandu says this cannot be done.

Unfortunately, in Betwixt Mountain and Wilderness, Mwambu’s adversaries succeed in having him circumcised the second time. But why do they go to the extent of humiliating him this much?

Well, each of the adversaries has a reason. Mwambu has always outsmarted Wayelo, right from Namwombe primary school where Mwambu always performed better than him. Kuloba bears Mwambu an undying grudge; when Kuloba goes to fight in the Second World War, Mwambu fathers a child with his wife.

As for Wopata, he blames his son Wabwire’s disgraceful shedding of tears at his circumcision to Masaba’s (Mwambu’s father) witchcraft. In Betwixt Mountain and Wilderness, Mwambu’s adversaries increase by one: John Wambooza hates him because, in his view, he tried to destroy his sister Nambozo’s future by writing a letter in which he alleged that he had seen the school Chaplain, Reverend Graves, copulating with her.

Mwambu’s adversaries assault him just a day to the nominations. Wayelo (who has crossed from the Workers Unity Party to the Uganda Democratic Congress led by Hosea Hamilton Otebo, a disguised portrait of Apollo Milton Obote) runs for the parliamentary post Mwambu was to contest for (but which he cannot now because he is admitted at Elgonton Hospital) and wins it.

Wayelo even makes it to Otebo’s first post-independence cabinet list as minister of education, although he is a primary school dropout.

Another ministerial nomination that shocks Mwambu is that of Michael Musisi as minister of justice and attorney general, despite the fact that Musisi did not finish his university education. With mediocre people like Musisi and Wayelo in power, Mwambu discovers that independence will not mean anything to Ugandans; so, he alerts them to the gloomy future awaiting them in an editorial he is to publish in his newspaper, The People’s Herald.

One of the strengths of Betwixt Mountain and Wilderness is the twist in its plotting, which helps Mwambu to know what has always been hidden from him: Kuloba, whom he thought was his cousin, is in fact his father on account of him raping Mwambu’s mother shortly after she had married Masaba, the person Mwambu has always thought to be his father.

The other stylistic novelty of the book is the use of the oral tradition. Not only are folktales told and riddling sessions held in the novel, the entire narrative is in fact told by a story teller called Nalukano as one long folktale.