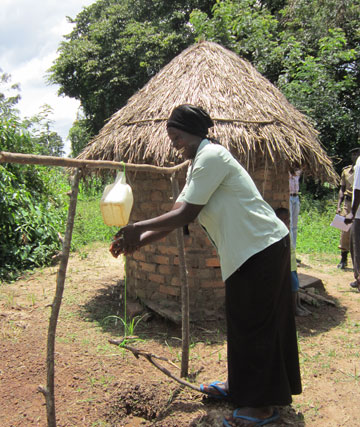 It is something many people take lightly, but its consequences are dire; poor hygiene could slowly lead one to one’s grave.

Many people in this country do not effectively wash their hands, a situation that has led to persistent prevalence of hygiene-related diseases.

According to Robert Otim, the advisor of WaSH campaign, at the SNV-Netherlands Development Organization, 80 per cent of the health burden has to do with sanitation-related diseases and it is not surprising that Uganda loses about 32,500 infants annually from infections such as diarrhoea, dysentery, cholera and typhoid.

As the world prepares to mark the Global Hand Washing day later this month, SNV and other development partners are engaging government, the public and other stakeholders to renew their commitment to sanitation and hygiene.

The theme for this year is Raise A Hand For Hygiene and the national celebrations will be held on October 15  at Kasana playgrounds, Luweero; President Yoweri Museveni will grace the function.

Otim said since the establishment of the National Hand Washing Campaign in 2007, the percentage of people who wash their hands using water and soap after visiting the toilet has increased to 33 per cent, from 14 per cent.

Though most households in sub-Saharan Africa have soap available, many do not use it to wash their hands especially after using the toilet; it was also noted that women don’t clean their breasts before beastfeeding.

“In Uganda, at least 95 per cent of households have a piece of soap, but they prioritise the soap for other needs,” he said.

Statistics from the Uganda Demographic and Household Survey (UDHS 2005/06) showed that 190,000 Ugandan children die every year due to diarrhoea alone. This comes from eating using contaminated hands.

“A research carried out recently showed that water in pots was more contaminated than that in wells; this shows that the problem is sometimes with the people and not the water sources,” said Joseph Oriono Eyatu, the commissioner for Rural Water Supply and Sanitation at the ministry of Water and Environment.

For him, men are big-time culprits.

“We, men pretend to be always in a rush, when we use restrooms we don’t see the reason for washing our hands, we pretend to be busy; the only problem is that we are just rushing to the hospitals by the end of the day,” Oriono said.