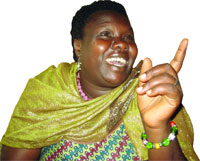 Beatrice Chelangat was 13 when she got her first major call to break barriers. She was in primary seven in Kapchorwa, lining up to register for the 1984 Primary Leaving Examinations. When her turn came, the teacher took one look at her and shook his head.

“Do not waste that money registering,” Mr Frank Kusuro told the little girl. “You will have to repeat and possibly sit the exam next year.”
Beatrice refused. She believed she was ready for the exams. Granted, two siblings who had come before her had repeated P7, but who said she had to follow the same route? She begged, cried and sulked, in vain.

But when she cried in the headmaster’s office, she got her way. She scored aggregate 19 and was admitted to the elite Sebei College on merit.
“I am veeery determined,” whispers Ms Chelangat, now 39, with a piercing smile, leaning forward like someone sharing a top secret. “If I want something, I do not take chances; I go out and work for it.”
Determination has been her life’s big secret.

Born to a former community teacher and a housewife and raised in Kapchorwa Town Council, Chelangat was the first child in her family to join university, but even that required strong resolve. After sitting her A-Level at Nkoma SS in Mbale, she did not do well enough to get admitted to Makerere University. She did not give up.
“I came back home, read privately and re-sat the A-Level exams at Sebei College and I made it to Makerere,” Chelangat says, revealing proudly that all her siblings have since gone to university.

Chelangat is the director general of the Reproductive, Educative and Community Health (REACH) project, a Kapchorwa-based non-governmental organisation working to eradicate female genital mutilation (FGM).  Fighting a cultural practice treasured by her people, the Sabiny, for generations, certainly needed determination, but it also tied in with her own fate. In 1988, she was 18, the age most Sabiny consider right for a girl to have her genitalia cut off as a rite of passage. That year, the Kapchorwa district council passed a resolution making FGM compulsory. And although this was later reduced to “optional”, the message had gone out.

“As a young girl, I and my peers felt insecure because we were not ready for the knife,” says Chelangat, the oldest of four girls and third born in a family of ten.
Later, while at university, Chelangat teamed up with other Sabiny students to campaign for girl-child education as a way of fighting FGM. With support from Sabiny elders and politicians, they participated in preparing a proposal for a project against FGM launched in January 1996.
Initially REACH was a programme under the United Nations Population Fund (UNFPA) but it has been an independent NGO since 2006.
Working with elders and through peer educators and advocates at all levels, REACH has sensitised both parents and youth about the dangers of FGM and the need to abandon it. It has recruited former “cutters” and given them heifers as an alternative source of income. It has developed packages of alternative rites of passage to replace FGM and lobbied local and national leaders to outlaw FGM.
“We called Dr Chris Baryomunsi [Kinkizi East MP and chairman of Parliament’s Committee on Food Security] and his team here in the board room and the elders told him to give support to have the bill passed. He accepted and even to be the one to move the bill,” she says.

On December 11, the day after parliament passed the legislation banning female circumcision, a sister-in-law in Mbale phoned Chelangat and offered a turkey to congratulate her.

But her efforts have been recognised beyond family circles. In an interview, Kapchorwa LCV Chairman Nelson Chelimo said REACH had done a great job and he hoped money would be found so that the project can reach the more conservative people.

In June, when a Sabiny delegation visited President Museveni in Entebbe, they chose Chelangat to read their memorandum. She says the president promised the Sabiny and Pokot one model girls secondary school each (as a tool against FGM) as well as 22 university scholarships, starting with the 2010/11 budget.
Last month, the American for UNFPA, a US-based organisation, nominated Chelangat for the international award for promoting health and dignity of women.

Next month, she will spend two weeks in the US, during which she will participate in activities to raise money for fighting FGM.
“Beatrice Chelangat, 39, is an extraordinary advocate devoted to empowering girls and eliminating female genital cutting (FGC) in Uganda,” AFU said on their website. “With her help, adolescent girls from the Sabiny tribe in Kapchorwa have the opportunity to go to school, delay marriage and ensure their health and dignity.”

In fact Chelangat’s work goes beyond Kapchorwa to other districts where FGM is known to be practised – Bukwo, Amudat and Bugiri. Members of the Sabiny Community in Tanzania have also contacted REACH to help them fight the practice.

But not everyone appreciates her journeys on rough roads and meetings in remote villages. Many wonder why she has maintained her campaign for 13 years.
“This elder from Tanzania asked me that ‘if you don’t cut a Sabiny woman, how do you control her?’” says Chelangat, referring to the cultural belief that FGM helps to control women’s libido.

“One of them asked my father that, ‘your daughter, with her degree in statistics, why is she wasting time telling people to refuse FGM?’” Chelangat says, adding that Statistics has helped her to plan for the organisation and her family.
A mother of two sons now in P7 and P3, she opts not to discuss the 2003 murder of her husband, Davis.

As an NGO, life is much harder than during the UNFPA days. Because of limited and irregular funding, REACH cannot carry out enough education campaigns against FGM. But, says Chelangat, they are determined to carry on.