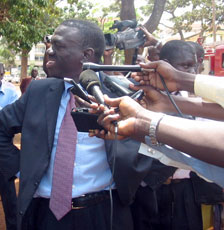 Hoima town was a scene of ghastly street fights on Sunday 6, as Police clashed with supporters of the opposition FDC President, Dr. Kizza Besigye.

It all started at about 12:40p.m. when heavily armed riot policemen attempted to block Besigye from going through town on his way to Hoima Central Prison to visit jailed FDC Secretary for Trade and Industry, Francis Atugonza – who is battling charges of abuse of office. Atungoza is also the LC-III chairman of Hoima Town Council.

Besigye forced his way through the Police roadblock mounted by the Regional Police Commander (Mid-western), Marcelino Wanito, at Butema trading centre, 15 kilometres out of town.

At Kihemba, 2 kilometres to Hoima town, the FDC leader was welcomed by chanting crowds led by the party’s Vice Chairperson for Western region, Patrick Baguma, and Jackson Wabyona, the Hoima District FDC chairman. As the crowd grew, Police under Wanito erected another barricade at Kinubi, a suburb of Hoima, to prevent Besigye’s motorcade from entering the town.

“I respect you sir, but I am under instructions not to allow you to disrupt public peace,” Wanito told Besigye.
But after a heated argument, only three vehicles in Besigye’s convoy were allowed to proceed. Meanwhile the crowd grew bigger, chanting FDC slogans and calling for the immediate release of their mayor, Atugonza. Some carried placards describing Atugonza as a political martyr.
“We want Atugonza, we want Besigye,” read one placard.

An outspoken critic of the NRM government, Atugonza was arrested on December 3 from his office and immediately charged with abuse of office. He was remanded to Hoima Central Prison until December 17.

He is accused of selling land that belongs to the Town Council at Rwentuha Road in Hoima town, without the knowledge of the council or the district land board.
Outside the prison where Atugonza is being held, anti-riot Police and FDC officials clashed again. Only Besigye and two other officials were allowed inside to see Atugonza. Journalists were among those barred.

Inside the prison, Besigye spoke to Atugonza for 30 minutes. He donated 100 kilogrammes of sugar, fruits and other items to the prisoners. The donation was applauded by the prisoners.
Besigye emerged from the prison to a waiting crowd, as Police unsuccessfully tried to stop him from addressing the people. “You cannot intimidate us. This is our country,” Besigye told the Police commander.

From the prison, Besigye walked a one-kilometre stretch to Kolping Hotel where he had been booked for lunch. As he walked along Fort Portal Road, the FCD leader was joined by a crowd of supporters. Chaos ensued again as Police fired teargas canisters and beat up some people in a desperate attempt to stop the growing crowd. A woman wearing an FDC T-shirt was beaten by three policemen and was only saved by Besigye’s intervention.

“Why do you beat up an innocent woman? These are our mothers, such hooliganism is totally unacceptable,” Besigye charged at the policemen.
In another incident, a Police officer kicked a boda boda, throwing the rider and the passenger to the ground.

After nearly 30 minutes of street battles, Besigye arrived at Kolping Hotel for lunch. Heavily armed Police surrounded the hotel. Here, he told journalists that Atugonza’s arrest and detention was the “usual political persecution” of opposition supporters.

He said the Minister for Security, Amama Mbabazi, and Second Deputy Prime Minister, Henry Muganwa Kajura, were behind the plot. Besigye further alleged that detectives who arrested Atugonza were transported to Hoima in Kajura’s official car.

He however thanked the prison authorities for treating Atugonza well, reporting that the Hoima mayor was in good health and is continuing with the struggle.  Besigye alleged that Atugonza had told him he had been approached by NRM people who promised to drop charges against him if he agreed to join the ruling party.

“Atugonza told me that while in prison, NRM cadres went to him and asked him to cross to NRM and end his suffering. He has opted to continue suffering than join a regime of rogues,” Besigye said.

Critics have alleged that Atugonza’s arrest was precipitated by the impending visit of Besigye who was in town for a joint opposition rally on December 6. Police stopped the rally organised by the opposition under the Inter Party Co-operation (IPC), saying that they could not provide security. The IPC that comprises FDC, UPC, CP and JEEMA complied and called off the rally.

Bunyoro is shaping up to become a battleground sub-region, as the opposition makes in-roads, while the NRM fights back to maintain the status quo. On October 21, 2009, NRM Secretary General, Amama Mbabazi, directed NRM councilors who have served on Atugonza’s executive since 2006 to resign in what was seen as a plot to fail the FDC strongman. Mbabazi said then, that NRM leaning councilors would only work with Atugonza if he crossed to the ruling party.

After their resignation, Atungoza was hard pressed to constitute a new executive because apart from himself and Dembe Livingstone Kawaga, an independent, the rest of the councilors are NRM members. Atugonza was first arrested in April 2009 by security operatives and allegedly tortured. He has since sued the head of the Chieftaincy of Military Intelligence, Brig. James Mugira.
ssekikae@observer.ug