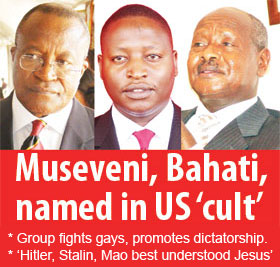 NEW YORK: President Museveni, Ethics Minister Nsaba Buturo and MP David Bahati have been linked to a shadowy religious fundamentalist group in the United States known as the ‘The Family’.

The group, comprising a number of influential congressmen, senators and other people in strategic positions, works secretively to promote its political, economic and religious ideas, some of them controversial, in the United States and across the world.

According to journalist, academic and author Jeff Sharlett, who has spent years researching on The Family, its core agenda includes fighting homosexuality and abortion, promoting free-market economics and dictatorship, an idea they once termed “totalitarianism for Christ”.

It recruits people in positions of power and influence to promote its agenda and, according to Sharlett, the group has had its sights on Uganda for over 20 years. He also says the group is behind the anti-gay legislation recently tabled in Parliament by Ndorwa West MP, David Bahati, which proposes the death penalty for men who have gay sex with disabled people, under-18s, or when the accused is HIV-positive.

In an extensive interview with National Public Radio (NPR), a privately and publicly funded non-profit radio network in the United States, Jeff Sharlett said that The Family identified President Museveni as their “key man in Africa” in 1986.

Individuals working for both the US government and The Family, he said, undertook trips to Uganda “to reach out to Museveni to make sure that he came into the American sphere of influence [and] that Uganda, in effect, becomes our proxy in the region”.

“They wanted to steer him away from neutrality or leftist sympathies and bring him into conservative American alliances, and they were able to do so. They’ve since promoted Uganda as this bright spot - as I say, as this bright spot for African democracy, despite the fact that under their tutelage, Museveni has slowly shifted away from any even veneer of democracy: imprisoning journalists, tampering with elections, supporting - strongly supporting this Anti-Homosexuality Act of 2009,” he said.

Describing Museveni as a “core” member of the group, Jeff Sharlett alleged that President Museveni visits, spends time and “sits down for counsel” with Doug Coe, the leader of The Family, at the group’s headquarters at a place called The Cedars in Arlington, Virginia.

This Doug Coe, with whom Uganda’s President reportedly consults, is the same man who believes that ruthless dictators such as Hitler, Stalin and Mao mirror Jesus’ central message on power. Sharlett says that Core members of The Family participate in deciding the group’s agenda, a privilege not enjoyed by other members of the group.

One of The Family’s central ideas, according to Jeff Sharlett, is that Jesus Christ’s message was not about love, mercy, justice or forgiveness. Rather, it was about power. The group says that Jesus didn’t come to take sides, he came to take over.

“Doug Coe, the leader of the group, tries to illustrate this, for instance, by saying, sort of posing a puzzle: name three men in the 20th Century who best understood that message of The New Testament. And most people are going to say someone like Martin Luther King, or Bonhoeffer; or maybe the more conservative, they can say, [evangelist] Billy Graham.

And Coe likes to give an answer - Hitler, Stalin and Mao, which just makes your jaw drop. And he will say - he’s quick to say these are evil men, but they understood power. And that message recurs again, and again, and again in The Family,” Sharlett said.

Sharlett, who spent time within The Family as an undercover researcher, given access to its leaders and archives, said that the group actively promotes dictators in pursuit of its economic and other interests. Because of its influence in Washington, the seat of the American government, foreign leaders find it in their interest to associate with the group.

Senator Tom Coburn, who also sits on the Senate Arms Forces Committee, is quoted to have said he has been on a mission to Uganda to “promote the political philosophy of Jesus as taught to him by Doug Coe.”

The group, Jeff Sharlett told NPR, creates “an invisible believing group of God-led politicians who get together and talk with one another about what God wants them to do in their leadership capacity. And that’s the nature of their relationship with Museveni.”

The US National Prayer Breakfast has been attended by all American presidents since the 1950s.
Jeff Sharlett says he has established in recent investigations that the group has been channeling money to Uganda to promote its activities, including the anti-gay Bill.

Following paper trails, he discovered that the money was channeled through an “African leadership academy” called Cornerstone which runs a Youth Corps programme described as an “invisible family binding together world leaders” and an organisation called the “African Youth Leadership Forum” associated with MP David Bahati.

“The Family has poured millions of dollars working through a very convoluted chain of linkages passing the money over to Uganda,” he said. According to Jeff Sharlett, in Uganda, Museveni, Buturo and Bahati are not merely under the influence of The Family but they are, in effect, The Family.

The Observer tried to get MP Bahati to shed some light on these claims but he could not be reached on all known telephone numbers. Neither could we speak to Ethics and Integrity Minister, James Nsaba Buturo, as he did not answer his phone.

Presidential Press Secretary, Tamale Mirundi, said he was neither aware of an organisation called The Family nor of any relationship between it and President Museveni. But should such ties exist, Mirundi said, he would not be surprised.

While The Family claims, on the surface at least, to promote family values, some of its more influential members have been ensnared by high-profile sexual scandals. In the latest scandal, Senator John Ensign of Nevada is alleged to have had an affair with the wife of a top aide, Doug Hampton and, on the advice of The Family, tried to buy Hampton off with $1.2 million.

The Family, also known as The Fellowship, was founded in the United States in 1935. According to its founder, Abraham Verene, God came to him one night in April, 1935, and told him that Christianity has been focusing on the wrong people, the poor and the suffering, “the down and out”.

He commanded him to be a missionary to and for the powerful, the “up and out”, who could then pass off the blessings to everybody else. The group does not maintain a website and prohibits its members from speaking about its activities.

Jeff Sharlett’s 2008 bestseller, The Family: The Secret Fundamentalism at the Heart of American Power, is the most comprehensive expose of the group yet.