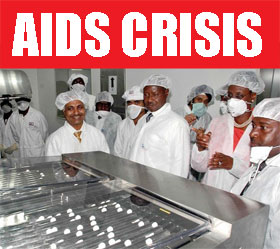 Patients turned away as drugs dry up.

A host of new HIV patients who qualify to receive free anti-retroviral therapy are being turned away by most designated health service providers.

The Observer has learnt that the credit crunch has forced local organisations that provide free HIV treatment to cut back on spending –and stop taking on new patients in need of ARVs because donor-funds mainly from Europe and North America, are limited.

Every year, there are about 130,000 new infections and after five years, Dr. Kihumuro Apuuli says, these people become eligible for ARV treatment after their CD4 count falls to 250. Uganda’s ARV programme is about 95% donor-funded; with the two major contributors being the Global Fund to fight HIV/AIDS, TB and Malaria, and the US Government’s Presidential Emergency Plan For AIDS Relief (PEPFAR).

About 400,000 Ugandans are currently in need of Anti-retroviral therapy, but only 170,600 can access the medication, Dr. David Kihumulo Apuuli, the Director General of the Uganda AIDS Commission, told The Observer, on Saturday. Kihumulo Apuuli also said that although no country has openly talked of reducing funding, there is concern and worry about what will happen in the short and medium term.

“In some of the discussions there is a question of how shall we sustain [the programme] if this continues. People are worried that the lifeline for the provision of these drugs may not be there. How far will this economic crisis go?

As of now there is worry—the concerns of clearly knowing that there may be harder times in future,” he said. Mildmay, a Christian charity provides free HIV drugs to about 20,000 people at its clinics in Segguku (on Entebbe Road), Mityana, Kyantungo, Nagalama, Buwama, Mukono Church of Uganda Health Centre, Kamwenge and two Catholic Clinics in Luwero.

The Charity’s Country Director told The Observer that they were no longer admitting any new patients due to the limited funds.
“The issue is how many new patients are we able to take on? We are not taking on everybody who comes from other places.

We have a limit and restricted to a radius. We are not as open as we used to be and are not taking on people who have been on other programmes,” said Dr. Emmanuel Luyirika, the Mildmay Uganda Country Director last week.

Luyirika also told The Observer that most of the HIV programmes are supported by donor funds and these donors are based in the West, which is worst hit by the recession. “So that is very obvious that if people there are having difficulty, then we will get less of those donations,” he admitted.

He further said that because Mildmay’s level of funding has remained the same from last year, the clinics have decided to cut costs – but continue to provide the service to only old patients already on the programme.

“Our emphasis is to concentrate on people who have been on our programme and their families and relatives because here we have a family approach,” he explained. The approach encompasses all members of the family that test HIV positive. The challenge faced by Mildmay is that although the number of people in need of treatment is ever increasing, the funding has remained at the same level.

What makes the waters even murkier is that HIV related deaths have reduced significantly.
“People who have HIV are no longer dying as they used to. So if you had 10,000 patients at the start of the year—[because you are getting maybe 400 every week], at the end of the year you will have 17,000 new patients.

And so for the next financial year you need to provide drugs for the whole 17,000 because they have not died,” Dr. Luyirika explained.The same measures have been taken by Kamwokya Community Church Centre that looks after 13,000 patients.

The Observer has learnt that the Centre is no longer taking on more patients because of the limited resources. It is understood that some cash-strapped donors have even proposed a 20% reduction in the funding for the Centre.

“We have been forced to revisit our strategy by focusing strictly on patients in need of ARVs,” Dr. John Mabale, the in-charge of ARTs at the community centre, told The Observer last week. He said that those who are not already on the programme are politely asked to visit other providers, who are indeed in a similar situation.

With most organisations not ready to take on new patients, it has become a fruitless search for treatment for some patients, particularly those who receive free treatment. If they opt to sponsor their treatment, on average a patient would need about Shs 1.7million a year.

Some unscrupulous people have taken advantage of the dire situation and are illegally selling some of the ART combinations. A patient who gets services at Mildmay confided in The Observer that she has been asked to pay for some drugs which are in short supply with a promise of a refund later. But Mildmay has denied the existence of such an arrangement.

“We do not ask for money on our premises for any services. They are free. It could be that some patients are lying to their benefactors to obtain money. That is a disciplinary matter that we are going to investigate and whoever is found culpable will be dismissed,” Dr. Luyirika said.

The total amount of money sunk in the fight against HIV that claims millions of lives in sub-Saharan Africa every year has reached $13 billion, up from $4 in 2001. It has had a lot of impact on countries like Uganda that have managed to reduce the mortality rate.

In only three years, the people who are able to access ART has shot to 170,600, up from 3,000. But as Dr. Kihumuro Apuuli points out, this achievement faces a big test of sustainability because those in need continue to rise.

The UAC boss said the drugs continue coming in but the challenge is how to maintain the supply of drugs if more people are becoming eligible.

“The numbers are not coming down. There are more worries that prevention seemed to have fallen on the way side as more energy was focused on treatment. There is a lot of need to rejuvenate the prevention activities. We need to stop the number of infections,” he said.

Apuuli’s views were re-echoed by Dr. Luyirika, who added that Uganda needs to re-evaluate the HIV/AIDS strategy to find out how many people need the services and how to provide these services. Noting the suggestion by the World Health Organisation to increase the CD4 count threshold to 350, Apuuli noted that Uganda would not afford it.

“With 350 the number will nearly double. We are providing for hardly 50% of those in need,” he said. At the moment, the national threshold stands at 250, the CD4 count at which a person can start anti-retroviral therapy.