Officials upbeat after first ever tourism expo in $140bn market

Guangzhou- With China generating more outbound tourists than any other country on earth last year, and tourism overtaking remittances to become Uganda’s most lucrative export during the same year, it’s not surprising that Uganda Tourism Board is looking to cash in.

As part of its new strategy to explore the Far East and China in particular as alternative tourism markets, UTB recently led a delegation to the China Guangdong International Tourism Industry Expo 2014 in Guangzhou. Coordinated by Uganda’s consulate in Guangzhou, the multi-dimensional delegation included representatives of UTB itself, parliament, Uganda Wildlife Authority, Civil Aviation Authority, tour operators and the media.

The minister of Works and Transport, Abraham Byandala, later joined the team, representing his colleague, Maria Mutagamba, the minister of Tourism, Wildlife and Antiquities who was unable to attend. While Uganda has previously targeted North America and Europe as the prime tourism markets and participated in expos in these countries, this was the first of its kind in China, and the scepticism could be immediately detected from the fact that only one tour company based in Uganda was represented.

But Paul Mukumbi, Uganda’s enthusiastic deputy consul based here, has no doubt that China is a tourist market Uganda can’t afford to ignore.

“We have been working on Europe and the United States but latest data indicates that China was the biggest producer of outbound tourists last year,” he said.

Like Mukumbi, from what she saw in Guangzhou, Flavia Kabahenda, the Kyegegwa Woman MP and chairperson of parliament’s committee on Tourism, was left convinced that UTB’s China move is on song.

“This is a very good idea if we can harness it with a passion, not just interest,” Kabahenda said.

Her colleague James Mbahimba (Kasese municipality), also a member of the committee, concurred.

“This is a big market; we need to tap into it. If you see the turnout at this expo, you realise it’s a big market,” Mbahimba said.

Indeed, the turnout was great and Uganda’s modest stall attracted a lot of interest, even winning an award for excellent organisation from the organisers. While there is no doubt that Uganda could do with a piece of the Chinese tourist pie, the challenge is how to position the country to cash in.

Language and culture barriers, as well as inconvenient if expensive travel, were found to be the main obstacles, leading members of the delegation to advocate the restoration of a national airline or at least a direct flight, and more effort in teaching the Chinese language in Uganda. 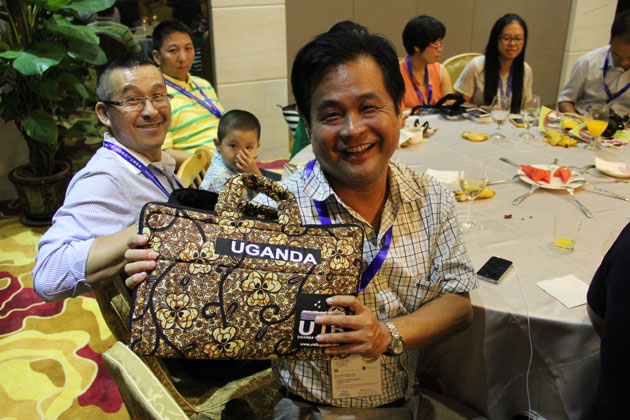 “Our government must work on a direct flight to China,” said Kabahenda, plunging into a subject that splits opinions quite sharply back home.

But opinions on the matter here were rather at par, with MPs Kabahenda and Mbahimba arguing that the government should consider a national flag carrier as a road or any other piece of transport infrastructure instead of focusing on direct and immediate profits.

“Tourism has a very high return; so, the infrastructure would be worth it,” Kabahenda said.

“A direct link in terms of transport would bring direct benefits,” Mbahimba added.

Illustrating the transport constraint rather succinctly, Gate 1 Tours and Travel proprietor Selgio Kansiime Muhangi pointed out that flying from Beijing to Guangzhou, a distance of about 2,000km, costs approximately $250, yet a flight from Entebbe to Nairobi, a flight distance of 520km, costs not less than $350!

With Kenya Airways in particular having Chinese air hostesses and announcements in the Chinese language on its Guangzhou –Bangkok-Nairobi flight, it’s harder for Ugandan tour operators to persuade Chinese tourists to venture further inland when that essentially means paying much more and enduring a language and culture nightmare.

A direct flight, on the other hand, whether a national carrier or not, would not only be cheaper but it would also minimise the language barrier by reducing flight time and ensuring Chinese-tailored on-board services.

The Ugandan team here also learnt that most Chinese demand a different kind of tourism.

“The Chinese are interested in our culture, how it affects our lifestyle, livelihoods,” Kabahenda said. “They are interested in the evolution of things…the Europeans want to see, but these ones want a story and Uganda has a story.”

There is also need to understand Chinese culture, Kansiime added, noting for example that Chinese are used to having lunch at 11am to 12pm and supper at 5pm to 6pm. Notwithstanding these rather surmountable odds, for Kansiime it was a worthwhile experience.

“China has become the biggest tourist market, so, it’s a good place to target,” he said, noting that traditional tourism markets had suffered a slump over the last couple of years and, so, booming Asia is the next frontier.

Prosperity in China over the last couple of decades has seen outbound tourists increase in leaps and bounds. The most popular destinations for Chinese nationals are said to be United States, Russia, France, Australia, Japan and South Korea. Of the 33.5 million Chinese tourists who used the services of tour companies in 2013, 281,716 visited Africa compared to 27.9 million who visited nearby Asian countries, 3.6 million who visited Europe and 751,783 who visited America.

Latest figures indicate tourism is now Uganda’s biggest export earner. It fetched $1.4bn in the 2013/14 financial year, up from $1.1bn the previous year, according to Bank of Uganda’s monetary policy for August. Remittances from Ugandans working abroad ($800m) are now second and coffee ($415m), third.

In 2012, a reputable online tour magazine named Lonely Planet  ranked Uganda number one among the top countries to visit and the ripple effect of this endorsement has been evident, according to industry players.