Anyone who watched the women’s lightweight national kickboxing championship at the Lugogo MTN Arena, on July 25, undoubtedly remembers Patricia Apolot.

With skillful tact, energy and determination, she beat Jackie Nassimbwa, her opponent, in a technical knockout in the fifth round to take the national title. The 23-year-old is now Uganda’s female kickboxing champion.

At 11am, as the sun’s rays begin baking the earth harder, Apolot is completing the day’s training at East Coast Boxing Club in Naguru. She has been practising endless combinations of punches, kicks,  and knee and elbow strikes with fellow boxers – all of them male – to master the martial art of kickboxing.

Her hands, enveloped by royal blue boxing gloves, work like pistons, delivering bolts of energy – that could easily land an amateur flat onto the ground – into a punching bag. Her coordinated feet movements are not any different. The continuous sweat streaming down Apolot’s upper body hints to a glory borne out of toil and sheer will.

“I have to train daily, and sometimes I train twice a day. Even after completing a match, I am given only one week or just a few days to rest before I resume the routine,” she says.

Although the sport remains heavily male-dominated, female fighters like Apolot hold their own. Engaging in the sport has modified her physical outlook, giving her tight abs and a toned body.

“Some people even fear her because they say she looks masculine and are afraid she could maul them,” says Hassan Khalil, her coach for six years.

Although her father, Emmanuel Mukula Arikose, wished her to become a policewoman, he is content and supportive of the career she has chosen.

“When I was introduced to boxing by Simon Wandera, a friend, in 2009, I grew fond of the game and even learnt kickboxing. Now, taking the national kickboxing championship belt means I am undefeated,” she boasts.

Because of her overriding success against Nassimbwa for the second time, businessman Gordon Wavamunno pledged to meet Apolot’s training expenses for both national and international fights and a Shs 5m cash reward. Additionally, Maj Juma Seiko donated to her Shs 500,000, cash.

Despite her passion for sport, Apolot had nurtured the childhood dream of becoming a pilot and musician.

“I have always loved music so much  that while I was at Teso Integrated Secondary School, I sang in the school and church choirs. About becoming a pilot, I grew up seeing people training at Soroti flying school where father occasionally took us,” she recalls. 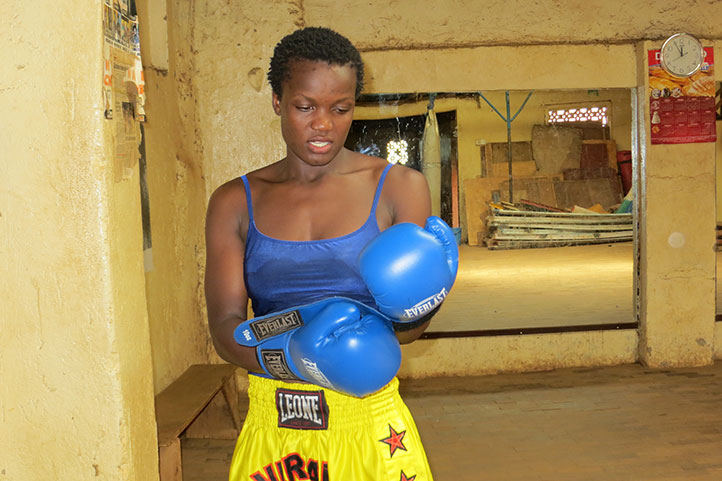 Her first public kickboxing fight took place in December 2011, when Moses Golola was going to fight Hungarian, Andras Naggy. Here, she was taking on Brenda Masendi. But before the biggest crowd in her nascent career, Apolot was beaten. She did not, nevertheless, sink under the weight of defeat, but trained even harder. This has been her only loss in the six public kickboxing matches she has had.

Apolot is also a professional boxer who has participated in over 15 matches and a fashion model with Mambo Entertainment and also practises taekwondo, another martial art. She also instructs in monkeynastix, a fitness movement education, focusing on developing children’s fundamental movement skills, for children under eight years.

Despite the towering successes Apolot has registered, she says challenges such as the lack of sponsorship and allowances have continued to dog her career.

“There is nothing as annoying as training for a match and then it is cancelled. Then, you have to retrain afresh,” she says.

But because of her love for the martial art, she is hanging in there. She envisages opening a training and sponsorship academy for female kickboxers.

She was born to Emmanuel Mukula, an engineer, and Josephine Aujo, a businesswoman in Ngora district. Apolot was, however, raised by her grandparents and was later to stay with her stepmother, Jane Asekenye, after her parents separated.

She attended St Aloysius primary school and completed P7 in 2002 before joining Teso Integrated SS. Here, she was in the school choir, participated in sports, was the school MC and entertained through mimes. She completed S6 in 2008 and joined Gary, a cassava- processing project, for training, until she came to Kampala in 2009.

When Apolot came to Kampala, she started as a footballer at Proline Academy in Lugogo before joining boxing.

When asked whether she was ‘seeing’ anyone, the 23-year-old champion coiled up shyly and said: “Yes I am, but I am not telling you who he is.”