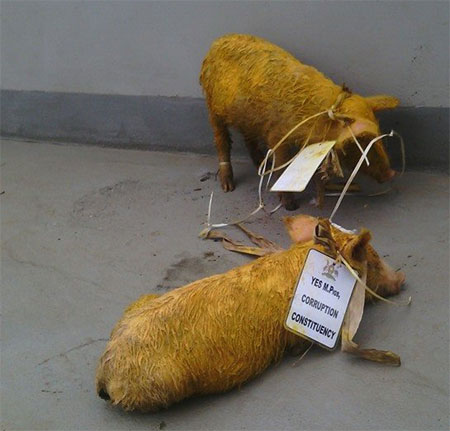 Feeling that the country’s governance has gone to the dogs, two youths yesterday protested by taking pigs to one of Uganda most important political institutions.

The youths, carrying piglets doused in yellow paint, raided Parliament, arguing that the country had had enough of corruption, among other ills.

Security personnel at Parliament were thrown into panic by the two young men, who claimed to be members of “The jobless-Brotherhood.”

The yellow tinge on the piglets was meant to taunt the ruling NRM party, whose main colour is yellow. Norman Tumuhimbise, a former parliamentary candidate for Bukoto Mid-west and another one only identified as Mayanja, wore T-shirts with inscriptions denouncing corruption, youth unemployment and exploitation.

Their stunt coincided with the presentation to  Parliament of the report into the persistent delays of salary payments to civil servants by MP Raphael Magyezi (Igara West). For some time, police officials at Parliament seemed to have been caught flat footed. 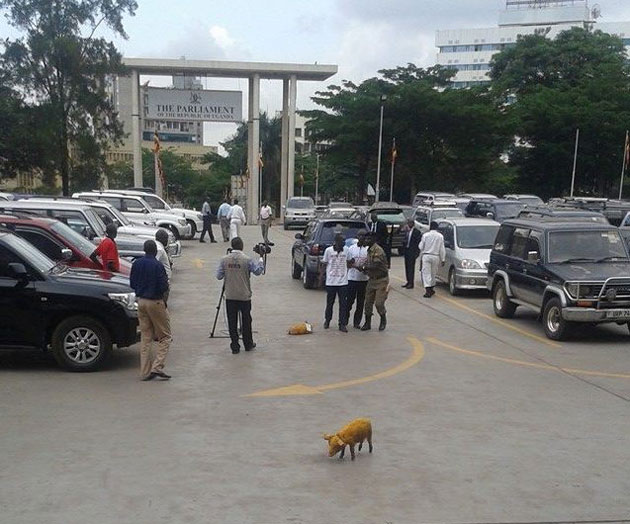 They didn’t know what to do with the youths who had walked up to Parliament’s main entrance. While some MPs raised concerns about their safety at Parliament, opposition MPs such as Joseph Balikuddembe (Busiro South) and Muhammad Muwanga Kivumbi (Butambala) said the action was laudable.