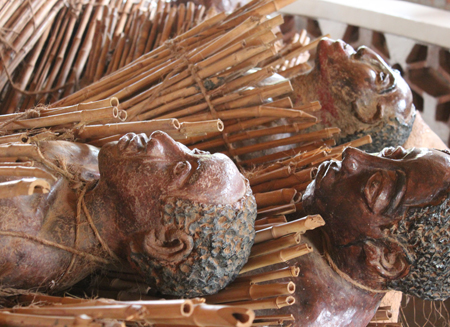 At first Rome wanted to canonise only Charles Lwanga

On October 18, 2014, Ugandans will celebrate the 50th anniversary of the canonization of the 22 Catholic Uganda martyrs. It was way back in 1964 in St. Peter’s Basilica in Rome, when the late Pope Paul VI officially declared the Uganda

martyrs saints whose martyrdom day, June 3, was to be observed by the faithful all over the world.

The canonization of the martyrs came 78 years after their martyrdom at Namugongo and other places. This year, as we celebrate Martyrs’ Day, many Ugandans may not be aware that the journey to canonization wasn’t that easy. According to Fr. Charles Lwanga Ssengendo and Fr. Tony Musuubire of the Kampala Archdiocese archives office at Lubaga, the Catholic Church in Uganda had to work hard to prove to the Vatican that the Ugandan martyrs indeed deserved to be recognized as saints.

Fr. Ssengendo salutes Ugandans who played a major role in seeing to it that the martyrs were canonized. Without such people, he says, probably there would be no Uganda Martyrs’ Day. The unsung heroes whose names are hardly mentioned on the day include the two religious officials who investigated and later made a strong case for the canonization of the martyrs; Fr. Timoteo Ssemwogerere [in Uganda] and Fr. Antonio Wouter [Vatican].

The two provided powerful institutional backing that resulted in overwhelming support for the martyrs. Also credited in this regard are former archbishops, Henry Stretcher (Masaka), Joseph Cabana and Joseph Kiwanuka (Lubaga), and Joseph Heath (missionary of Africa). Bishop Heath helped locate the relics of St. Charles Lwanga and Matia Mulumba, which had been buried under a mango tree at Nalukolongo by Christians who fled Kabaka Mwanga’s persecution to Bukumbi in Tanzania.

On his part, Archbishop Joseph Kiwanuka stood firm and questioned the Vatican’s earlier decision to first canonize only Charles Lwanga with the fate of the others to be decided on individual basis.

It was also possible that the Bazungu could not easily allow such a big number of Africans to become saints at once. Fr. Tony Musubire said the Vatican felt uncomfortable canonizing especially those martyrs that were not baptised at the time of martyrdom, the likes of St. Mukasa Kiriwawanvu.

“In this regard, Archbishop Kiwanuka strongly reasoned that such martyrs too deserved to be canonized, after all they had experienced a tougher sort of baptism, a baptism of fire.”

A staunch Catholic named Charles Lwanga, 64, of Musigula zone in Lubaga, recalls an incident in the early sixties when Archbishop Kiwanuka was tasked to explain why the Vatican was taking long to canonise the Ugandan martyrs.

“Kiwanuka categorically put the blame on certain satanic forces inside the Vatican,” Lwanga recalls. The archbishop was probably referring to the office of the “devils’ advocate,” an office whose job then was to try to knock down the case for sainthood. Other important players in the canonization of the martyrs include the late Bishop Adrian Kivumbi Ddungu, who succeeded Archbishop Kiwanuka at Masaka. He vigorously marketed the cause for canonization and was among the clergy that made it to Rome to witness the grand canonization ceremony.

Ugandan drums were the first African musical instruments to be played in St. Peter’s Basilica, Rome, during the canonization ceremony. A Ugandan choir led by the great composer Joseph Kyagambiddwa performed during the event on October 18, 1964. History was made when Ugandan traditional musical instruments such as drums, adungu and ndingidi became part of liturgy.

This was significant because in colonial Uganda, such musical instruments had been deemed satanic by the early missionaries who saw them used in traditional shrines. It was the Second Vatican council that cleared the instruments. With the canonization out of the way, the next task was to market the martyrs all over the world.

One man that stands out here is the late Emmanuel Cardinal Nsubuga. He’s credited with overseeing the construction of the current Uganda Martyrs Basilica at Namugongo. He went on to make history by successfully inviting the pope to visit Africa for the very first time. In 1969 Pope Paul VI came to Uganda to bless the Uganda Martyrs Basilica which was then still under construction.

That visit played a big part in raising awareness in the whole world about the Uganda martyrs. Others that played a key role in promoting the martyrs included Bro. Augustino Tarcisio, J.F Faupels and Msgr. Lawrence Mbwenga. Yet the story of the Uganda martyrs would be incomplete without mentioning the roles played by the two popes, Benedict X and Paul VI, who beatified and canonized the martyrs respectively.

Pope Paul VI, in particular, cultivated a special relationship with Africa. Besides being the first pope to visit Africa in 1969, the pope used this visit to try and reconcile the then warring factions in Nigeria. Both the Nigerian federal government and the Biafra separatists sent delegations here to meet the pope as Vatican officials stated the pope was prepared to stay in Africa for a month in a bid to bring peace to Nigeria.

Pope Paul VI, who reigned between 1963-1978 showed a special devotion to Uganda. In his will, he donated some of his wealth to the people of Uganda, some of which was used by Kampala Archdiocese to build the Pope Paul Memorial Community Centre in Ndeeba, on the outskirts of Kampala.

But who can dare celebrate the Uganda Martyrs Day without remembering Fr Simon Lourdel, the French priest that was nicknamed Mapeera (mon pere –my father- in French). The young priest brought the Catholic faith to Uganda in 1879. He is credited with teaching Christianity to the Kabaka’s pages, the group from which the martyrs emerged.