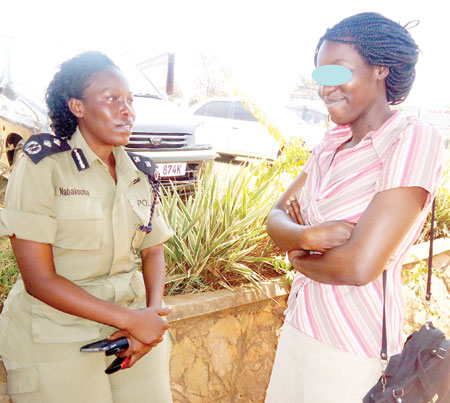 When she signed up for a job opportunity in the Middle Eastern country of Bahrain, Lynn Tino* was under the impression that the opportunity would improve her fortunes greatly.

Instead, Tino endured four years of inhumane treatment in Bahrain. The 27-year-old was subjected to daily abuse as a housemaid by employers who were not even paying her a decent wage.

“I used to work for about 17 hours in a day, cleaning a very big house, washing dishes like for 30 people daily, and washing clothes. I was not allowed to rest even if I was sick. I would wake up at 4am and sleep at 1am daily after everybody in the house had slept,” she said.

Tino is now back in Kampala after finally escaping two weeks ago – at the second attempt. When Tino first tried to escape after two years in  what was effectively a form of house arrest, she says even the police in Bahrain was not willing to help her.

“The police advised me to complete my contract since the labour laws favour Arabs,” she narrated at the ministry of Internal Affairs recently.

According to Tino, in January 2010, she was convinced by a neighbour and an unregistered recruitment agent to abandon her university studies and go to look for employment in the Middle East (kyeyo) as a domestic worker.

Because the salary of $200 (about 500,000) that she was promised sounded lucrative enough for someone yet to acquire any formal qualifications, Tino bought into the idea. Tino was not required to part with much. The managers of the company that processed her visa only asked for her passport, passport photographs and Shs 300,000 for a blood check-up.

In Bahrain, Tino was hired as a maid by a family of eight people. But her monthly salary was slashed to $150. The balance of $50 would be paid to the company that recruited her. To tie her down, Tino’s passport was withdrawn from her as soon as she reached Bahrain, and given to her employer. She couldn’t escape.

In 2012, after her first contract expired, Tino was forced to continue working against her will. She was also not allowed to leave the house in Bahrain or to communicate with anyone in Uganda. Those conditions compelled her to make the first attempt at escape without much success after the police refused to help.

On January 16, 2014, the family renewed her contract for a second time against her will. Within the four years that she had worked under them, Tino says her salary had never been increased. Once again, Tino hatched an escape plan from the house – which was successful. She managed to communicate to her mother who reported the case to the ministry of Internal Affairs.

The coordinator for anti-human trafficking taskforce at the ministry, Moses Binoga, says when they got information about Tino’s plight, his office followed it up and embarked on a rescue mission.

“We communicated to the Ugandan embassy in Saudi Arabia through the ministry of Foreign Affairs for her rescue. The embassy officials communicated to the Bahrain authorities and her employers who had extended her contract by force and denied her to leave,” he said.

Binoga said employers in the Arab world were like gods and workers like serfs; the boss is always right, and the worker literally has no rights.

Tino is not the first victim of such employment agencies.  Binoga said more than 400 victims reported to authorities last year, saying they had been trafficked to other countries. Of those, 250 victims were returned to Uganda.

“More than 150 victims are still missing abroad and police are investigating to rescue them,” he said, adding that in order to protect citizens, Immigration will now cancel travel that seems suspicious.

Internally, according to Binoga, another 350 children were rescued from different parts of Uganda as they were being trafficked for prostitution, adoption, exploitation and human sacrifice. Last week, the ministry of Gender, Labour and Social Development forced a recruitment agency, Alsaco International Uganda Ltd, to return all the girls they had taken to Kuwait to work as domestic servants following reports of increased harassment.

“All the top managers of Alsaco International Uganda Ltd were arrested, including the operations manager and general manager,” said Binoga. “They are currently facing charges of promoting trafficking in persons for labour exploitation.”

The police officer warned the public against using unlicensed labour recruitment companies. “The safest way for jobs abroad, especially in Arab countries, is to use licensed companies because they can be tracked in case of any complaints from the employees and forced to return you [the worker], or cancel the licence of the company,” he said.

Immigration records show that only 31 companies are registered to legally assist job seekers in Uganda to find employment abroad.

**The name of the victim has been changed at her request.