To prove that his prime minister has been mobilizing politically against him, President Museveni presented audio recordings and transcripts to the NRM parliamentary caucus on Monday.

This marked a new low as the power struggle between President Museveni and his loyal prime minister, which got to a head at Kyankwanzi last month, appeared to escalate.

The Observer has learnt that Museveni told the caucus members during their meeting at State House Entebbe that detractors within NRM have been telling people that the president has run out of ideas.

“There are people moving around the country telling people that the chairman [of NRM, Museveni] has failed to deliver, that he is now promising Ugandans hot air,” Museveni reportedly said.

“They are telling the electorate that Museveni has run out of ideas and that he is no longer in charge; that the country is being run by his family.”

At first, our source said, a tough-talking Museveni didn’t name names. He spoke of “some people” but later mentioned Amama Mbabazi, his wife Jacqueline who heads the party’s Women League, and former minister Hope Mwesigye.

“These people are misusing party structures and external contacts to decampaign me,” the president reportedly said.

The Monday caucus meeting was a follow-up to the February 6-16 retreat at Kyankwanzi that among other things tapped Museveni as the sole NRM flag bearer going into the 2016 elections. The move was understood as an attempt to shut out Mbabazi’s undeclared challenge.

Museveni’s intelligence report into Mbabazi’s alleged political activities, sources said, was backed up by audio recordings of some political meetings. The recordings were played for everyone to hear, our sources told us. Museveni also carried transcribed versions of some of the recordings that he read out to the MPs.

One of the sources, an MP, said the recordings seemed to have been done by telephone.

“It appeared like some people were arguing whether to back or reject [Mbabazi’s presidential bid], and then you could hear another voice saying that we can’t betray the man [Mbabazi] after eating his money,” the MP said.

As the caucus meeting continued on Tuesday, Museveni also presented a recording of a meeting that reportedly took place at Mbabazi’s home chaired by his wife, Jacqueline. In the recording, sources who listened in have told us, people are heard saying that Museveni is tired and has run out of ideas.

According to our sources, Mbabazi stayed calm and composed as the allegations were being made.

When it was time to respond, he said he was not aware of the said campaign [to tarnish Museveni] but the MPs murmured in disapproval. Mbabazi, however, admitted knowing about his wife’s mobilization against the Kyankwanzi resolutions.

“Yes, I learnt of some of the activities by my wife,” he said. “She embarked on that process because she felt that I was unfairly treated at Kyankwanzi. When she heard that you wanted to sack me as secretary general, which is illegal, she couldn’t let it go on. She on her own decided to mobilize against the resolutions,” Mbabazi said.

The prime minister reportedly surprised many at Entebbe when he questioned Museveni’s conduct, blaming him for accusing him and his wife before the caucus even when he (Mbabazi) had led his wife to Museveni for a discussion over the issues. 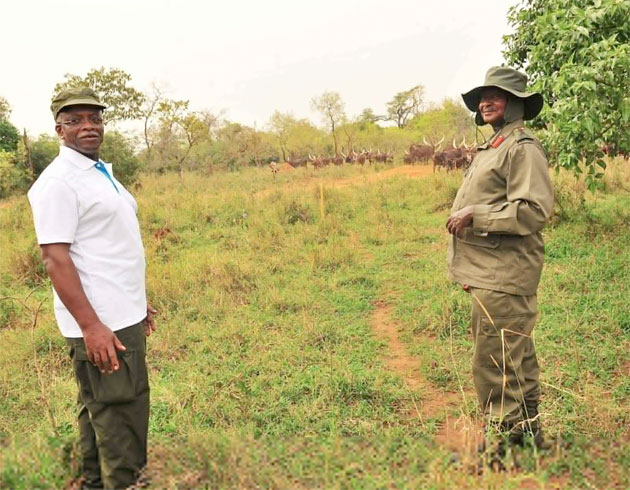 He challenged MPs to show proof that he has been promoting himself ahead of 2016.

“Let anyone who knows any person that I have ever met… or even among you [MPs]; if I have ever approached you and asked you to support me, come forward,” Mbabazi said. None did.

After this, Mbabazi excused himself from the meeting, saying he had another meeting with his Argentine in-laws. Following his departure, the meeting was postponed to Tuesday as members said they didn’t want to discuss Museveni’s report in Mbabazi’s absence.

Contacted on Tuesday morning at Parliament, and given The Observer’s version of events, Mbabazi said:

“I don’t have time now, maybe contact me later.”

Details from today’s session were still trickling in by press time. But our source said that Mbabazi made a detailed response to the accusations. He told the caucus that he could not stand against Museveni.

As debate dragged on, a source said today evening, Museveni stood up and retraced his long history with Mbabazi. Museveni’s submission effectively calmed the anti-Mbabazi camp. But given how unpredictable politics can be, there was no guarantee this was not calm before another storm.